Scotland’s independence debate was intensified by First Minister Nicola Sturgeon’s announcement this week, but both sides of the argument have been preparing since the EU referendum, writes Peter Lynch. He argues that, while the timing of an independence referendum is the main focus at the moment, others may well come up, and that the parties’ positioning on the issue should be read in light of the upcoming local elections. 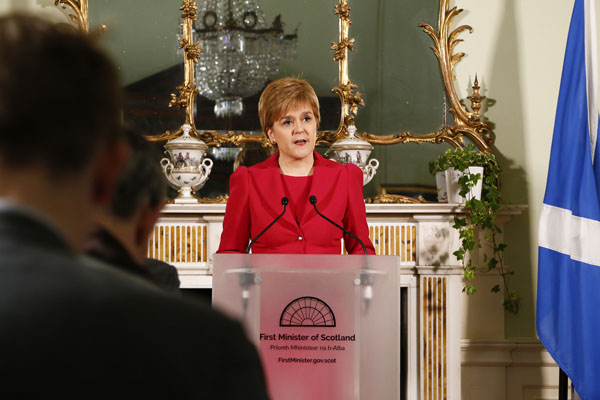 However, in spite of this announcement, and its rebuff by the UK government three days later, it’s all a bit like 2011/2012 in that what we know about the referendum is overshadowed by what we don’t know. We don’t know when the referendum will be held, in what circumstances and what the question will be. The result is that we seem to be in a rather static situation of constitutional crisis with a lot of unanswered questions.

Last time, negotiations did yield a Section 30 Order through the Edinburgh Agreement. It provided clear cross-government legitimacy to the referendum, but that was not clear from the start. Indeed, the Yes and No campaigns were up and running long before we had clarity on some of the basics of the independence referendum process.

This time, the UK government seems set to prevent that by denying entering into negotiations from the outset. This will please some and displease others, and those others aren’t supporters of the UK government – they’re the Yes voters from 2014. The UK government is keen not to be diverted from Brexit by Scottish constitutional issues and has made its case to its own supporters on that basis – and through cleverly devolving the issue to Scottish Conservatives Ruth Davidson and David Mundell.

Last time around, coalition meant that the Liberal Democrats played a constructive role here, with Michael Moore closely involved as Scottish Secretary, but Chancellor George Osborne working on the issue too. This time, it’s all about the Conservatives and that’s a dangerous thing where Scotland is concerned, though the government certainly knows it.

Looking back to 2011/12, so much of the debate last time was fixated on the prospect of a third devolution option on the ballot paper instead of a simple Yes/No to independence. This time, the debate is centred on timing – with the Scottish Government having a window influenced by Brexit, whilst the UK government has an entirely different timing in mind (if it can’t get ‘never again’), also influenced by Brexit.

Beyond the argument over timing – and the granting of a Section 30 Order to support the referendum process – we are in the dark. Don’t be surprised if this story develops beyond the timing issue though.

Should we be surprised that we’ve ended up here? Well, when you piece together the various aspects of SNP and Scottish Government activism since 23 June 2016, these last few days’ events are not so surprising. A second independence referendum was clearly signalled in the SNP election manifesto in 2016 – indeed, it was announced there with Brexit as a key trigger.

Remember, Scotland voted to Remain by a large margin. Brexit brought Scottish government activity, policy development and coalition-building on the EU and a draft independence referendum bill. In addition, the SNP established a Growth Commission to refocus the economics of independence and held a national survey that gathered two million responses.

Within the wider Yes movement, minds had begun to think about the next referendum and a series of small mobilisations had begun to occur – raising funds, thinking through positions and preparing for the battles to come. At the same time, the other side of the independence debate was also preparing, with Scotland in Union raising funds and its profile and Scottish Labour beginning to reshape its position on the constitution, at the same time as taking a stronger line against a second referendum.

Finally, remember the politics of Yes and No here and where they land in the electoral cycle. We are about to face local elections in Scotland that use Single Transferrable Vote (STV) – meaning parties are looking for first, second and third preferences to get their council candidates elected.

The Tories have built their recovery on appearing as the strongest opponents of another referendum – which has helped to shift defectors from Labour in particular. Moving from a strong anti-referendum position would therefore prove catastrophic for Conservatives hopes of coming second in May through gaining second preferences from Labour voters (or indeed first preferences).

Labour has repositioned itself to attract Yes and No voters by talking about federalism and preventing a second referendum to try to stem the flow of Yes voters to the SNP and No voters to the Tories. So, when Jeremy Corbyn comes to Scotland and states that a second independence referendum is ‘absolutely fine’, it’s a disaster for Labour as it undermines the Scottish party’s attempt to carefully reposition itself in the middle of the constitutional ground.

So, in short, whilst the referendum issue is subject to high-level manoeuvring between the Scottish and UK governments, there are short- and immediate-term considerations about electoral strategy and positioning for the political parties too with elections on Thursday 4 May.​