The UK’s exit negotiations from the EU will concentrate on separate withdrawal and trade deals, and timing will be a crucial factor, writes Kirsty Hughes. She argues that autumn 2018 will serve as a key period where enough about the UK-EU negotiations will be known and pressure will mount for the constitutional options and implications of Brexit to be addressed. 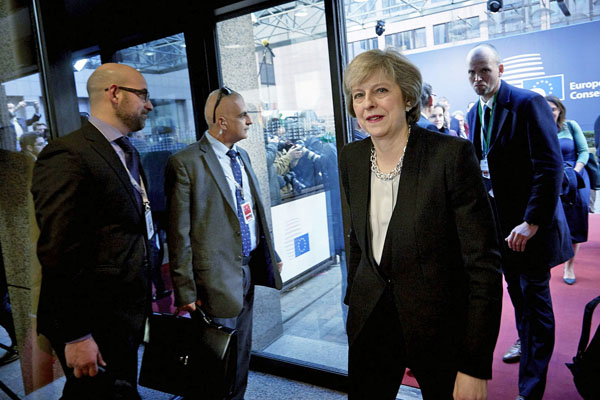 If Theresa May triggers Article 50 on schedule this month, then Brexit talks should end in autumn 2018 – in time for ratification or approval by the European Council (by a qualified majority vote), European Parliament and Westminster ahead of March 2019 (when Article 50’s two-year deadline will expire).

Many different UK political actors have a focus on autumn 2018. Peers, this week, passed an amendment to the Brexit bill setting out the requirement for both Houses of Parliament to have a meaningful vote on the Brexit deal. The Lib Dems continue to argue for a referendum on the deal, with the alternative being to stay in the EU. And the SNP are edging closer to calling for a second independence referendum in autumn 2018, so that Scotland has the chance to vote for independence in the EU before Brexit in March 2019.

But what are we likely to know by autumn 2018, and what will happen if there is no deal by then?

If Brexit talks, and UK-EU27 relations, stay on track, there are two main deals to be negotiated.

The exit deal: Firstly, there is an exit deal which will be the main focus of the Article 50 talks. This will cover a wide range of issues, but attention will focus especially on: the rights of EU citizens living in the UK, and UK citizens elsewhere in the EU; the Brexit bill (ie the UK’s outstanding liabilities to the EU); and a transition agreement to cover the period between the UK leaving the EU and a new trade deal being in place.

If the UK does trigger Article 50 this month, the EU27 are likely to be ready to respond and open talks within about two months, so late May is the time many are looking towards for the two sides to meet.

The trade deal: Secondly, there will be a comprehensive UK-EU27 trade deal, along with a set of broader cooperation arrangements from judicial to foreign and security policy cooperation.

While Article 50 allows for an initial agreement on the outline or framework for future UK-EU27 relations, the two sides already disagree as to whether this negotiation can proceed in parallel to the discussion over the initial exit deal (the UK view) or whether they are broadly sequential (the EU27 view – and that of its chief negotiator Michel Barnier). Either way, few believe that a comprehensive trade deal to replace the UK’s EU membership, including its Single Market membership, can be agreed in two years or less.

If preliminary talks on the outline of a future trade deal do take place in the first 16 months of talks through to autumn 2018, then the more optimistic estimate that a complete trade deal might be agreed, at best, another three years later – though others say up to seven or more years later. The deal would then have to be ratified across the EU27 – something which Canada has recently found, after seven years of talks on its EU trade deal, can be rather tricky.

If Brexit talks don’t break down (John Kerr, former Permanent Under Secretary at the Foreign and Commonwealth Office, has argued there is a 30 per cent chance they will), what might we know by October 2018?

There will, then, be much more information in autumn 2018, but we will be a long way from knowing the final details of a comprehensive UK-EU27 trade deal, when it may be agreed and whether it will be ratified across the EU27. That is unlikely to be known before 2024 at the earliest (including ratification) or perhaps 2028 or 2029, if talks are slow and tough. But there should be enough information in autumn 2018 to have a better insight into the degree of access the UK and EU27 are jointly aiming at into each other’s markets. This will not be the same level of access for the UK as it currently enjoys as part of the Single Market.

For different political parties, this could be enough information to move forward. The Commons and the Lords, if they have a meaningful vote (and not just the chance to ratify or reject and leave the EU without a deal – May’s approach), can assess this deal.

The Lib Dems can continue to look for political support for a referendum on the deal, with the choice being between a possible (but not definite) broad trade deal for the UK with the EU, like Canada, and deciding to stay in the EU after all (if the EU27 will still have the UK).

And the SNP can argue there is enough information at that point for an independence referendum to spell out the implications of staying in the UK or being independent in the EU.

But there will not be full information on future UK-EU27 relations – neither on the trade nor security nor foreign policy sides. Those who want full information before any second EU or independence referendum should be arguing to wait ten years.

If talks break down before autumn 2018, the UK – and EU27 – will be heading for the ‘WTO cliff’ – the UK crashing out of the EU without a deal, with both sides scrambling to deal with the political and economic and security fall-outs.

Both sides can be expected to look for ways out of this potential breakdown in talks. They can, under Article 50, unanimously agree to extent the two-year time period for talks – something the EU27 will be very reluctant to do, not least with elections to the European Parliament due in May 2019.

The UK will be in something of a political crisis at this point – the WTO cliff is not regarded with equanimity by anyone beyond a few hard-line Brexiteers. Westminster will surely want to be consulted on what to do – whether to abandon Brexit, push for a talks extension or some other means of resolving the crisis.

The Lib Dems may find more support at such a moment for the idea of a second EU referendum. Meanwhile, the SNP could doubtless argue that, in the face of a ‘WTO cliff’, Scotland should move rapidly to independence in the EU – but will surely face counter-arguments that a second independence referendum should wait to see how the crisis of the talks breakdown is resolved.

In autumn 2018, we will know, if talks haven’t broken down, the UK’s proposed exit deal. And we will know something, but possibly not that much, about the goals of the future UK-EU27 trade deal. Yet it is this trade deal which is the most important deal in terms of likely impact on, and implications for, the UK – and for Scotland, Wales and Northern Ireland.

There is a catch-22 here, precisely because the exit deal is not the same as the future trade deal. How big an impact Brexit will have on UK trade, or what the Scotland-England border could look like in the future (if Scotland votes for independence), will depend mainly on that future trade deal.

But waiting to see where that future trade deal gets to by 2024 or 2028, means the UK will have been out of the EU for five or ten years. Any route back – if the final trade deal looks bad or breaks down – will be costly, cumbersome and politically challenging, at home and with the EU27.

So despite this catch-22, if there is an exit deal, and an outline of goals for a trade deal, then autumn 2018 will be the crunch moment. For political parties that want a second vote – whether on the UK staying in the EU or Scotland being independent in the EU – this will be the key time. But there will much that is still unclear, and this will fuel arguments on all sides.

If the talks break down, then autumn 2018 will be a moment of crisis – one that all players should be making their plans for now, too.

The article is co-published with the Centre on Constitutional Change.

Dr Kirsty Hughes is Senior Fellow at Friends of Europe, Brussels and a writer and commentator on European and international politics and policy. She has worked for organisations including Chatham House, the Centre for European Policy Studies, Oxfam GB and the European Commission.