The main challenge facing today’s European Union is to find ways to bring together the diverging interests of its many members, writes Colin Imrie. He argues that, if the EU27 manage to arrive at a common vision combining economic and social priorities, the EU could begin once again to demonstrate its relevance and importance to ordinary citizens. 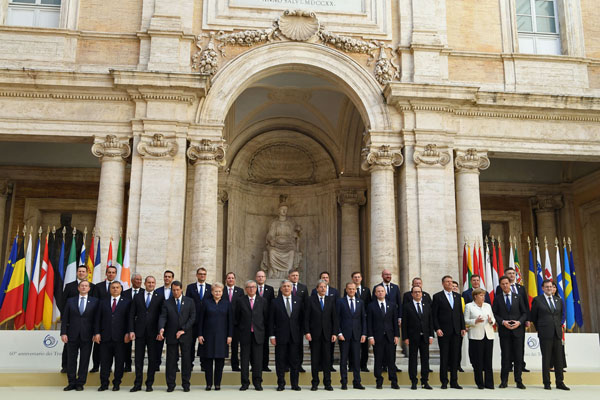 As European leaders travelled to Rome for the formal ceremony to mark the 60th anniversary of the Treaty of Rome, there has never been more uncertainly about the future of the European Union. Through Brexit, the EU is losing one of its largest members and budget contributors. The Eurozone is still fragile and divided between North and South, with Greece in particular facing years of austerity and Italy’s financial system showing real signs of stress.

There is a real and growing cleavage between the original Western European EU Member States and the newer Member States of Central and Eastern Europe over key issues such as the future of structural funds, migration, the rule of law and the role of a multi-speed Europe. Economic growth remains below the OECD average, with business confidence in France showing a drop in March.

Overlying all these practical and policy challenges remains the threat of populism and political uncertainty, with Europe greatly concerned about the fissiparous tendencies for the international order, unlocked by the Brexit vote and in particular the election of Donald Trump in the United States.

It is therefore hardly surprising, in the context of the launching of the Article 50 negotiations and domestic political landmarks such as the French presidential election in April/May, that political commentators and EU experts are unwilling to give clear predictions about where Europe will go in the next few years.

Even European Commission President Jean-Claude Juncker was unwilling to do any more in his White Paper on the Future of Europe, published on 1 March, than to set out five scenarios of what Europe’s future might look like, rather than give a clear steer as to the direction the EU should take.

Each scenario has its own logic – more of the same; focus only on the Single Market; allow more of a multi-speed Europe; focus down on a small number of policy areas; or increase EU competences to do more together. But as a group of options without a clear steer, they offer no more than an opportunity to disagree, as the argument between Western and Central and Eastern Europe at the European Council on 9 March over whether there should be a multi-speed Europe demonstrated.

If the EU is to show more clearly to its citizens what its future will entail, then it needs to find common purpose around a single or complementary set of objectives, rather than ones which divide Member States.

The key challenge is that as the EU has grown to 28 – now to reduce to 27 – and the interests of its component Member States have diverged. Finding a common thread among a Union with such diversity of interest is much more difficult than it was when the EU could focus around a single topic, such as in the 1980s when the Single Market – and the concomitant moves towards a Social Europe – could unite Member States and their electorates around a common vision.

The genius in many ways of the Single Market and the work of the Commission, led then by Jacques Delors, was that it brought together a range of policy objectives into a single framework which united left and right towards a common European vision. It was not solely an economic concept and had a wide range of implications for policy areas which went beyond simple economic interventions, including legal requirements (mutual recognition of judgements), professional qualifications and certain social and employment standards, as well as non-discrimination provisions. Is there anything which can be learnt from this example to provide a common thread today to lift Europe above its divisions and problems?

One area where there may be more agreement than there has been up to now is on economic and monetary policy. The focus has been on efforts to shore up Eurozone countries with high levels of indebtedness. But, driven largely by concerns in countries such as France about EU-wide constraints on public sector deficits, there is a strong pressure to allow a more ambitious EU policy to promote investment in EU economies.

In this context, it is interesting to note that Jacques Delors continues to contribute ideas for the future of Europe. Born in 1925 and now 91, long after his days as President of the European Commission, his influence remains strong through his honorary chairmanship of the Jacques Delors Institute – Notre Europe (Our Europe).

Two of the three points in the action plan focus on Euro Area measures: a short term ‘first aid kit’ to shore up the Eurozone against economic shocks by strengthening the European Stabilisation Mechanism and the Banking Union, and a longer-term plan to change the EU treaties to allow significant risk-sharing and sovereignty-sharing within a coherent and legitimate framework of supranational economic governance.

The other strand, focusing on economic policy coordination envisages reinvigorating the policy coordination mechanism by focusing on key economic reforms in goods and services, the labour market and business environment. It also foresees a significant boosting of the European Fund for Strategic Investment (EFSI), as well as promoting public sector investment.

It can be no coincidence that the report was published in the same week as Jean-Claude Juncker, in his 2016 State of the Union address to the European Parliament, announced plans to increase the EFSI from its original €315 billion in 2015, to €500 billion by 2020 and €622 billion by 2022.

Taking forward these ideas in a way which brings together the EU Member States has proved impossible to date, not least since there is a wide divergence between the view of Germany on the one hand, which wishes to avoid further commitment to fund transfers to indebted states, and that of France in particular on the other, which wishes to see greater EU support for public investment to tackle unemployment and give a boost to growth.

There is also strong opposition from some right-wing governments against those on the left, led by Sweden, Italy and Malta (which current holds the Council presidency), which wish to reassure the public about the EU’s commitment to the ordinary citizen by supporting President Juncker’s proposed European Pillar of Social Rights. This is intended to lay out rights and protections that European workers are entitled to in existing EU law, such as parental leave, non-discrimination and equal pay.

There are, however, straws in the wind which suggest that Europe may be getting ready to unite around a more unified economic policy. Although the Eurozone’s economic growth still lags behind the OECD average, growth is now being seen in all economies. Crucially, there are also signs that there is growing consensus among the largest economies, especially France and Germany, that major steps need to be taken to reinforce the EU as an economic actor as it deals with the challenges of Brexit.

Public and private investment are key to successful growth and a common approach to promoting such investment in a way which combines German concerns about transfers and French and Italian demands for more solidarity across frontiers and respect of social interests could well bring together the main EU countries around a common project, especially if the elections in France and Germany lead to governments committed to the EU.

This approach could well start to create greater synergies between the interests of the older Member States and newer Member States, such as Poland and Hungary, which are concerned about the future of their structural funds receipts after 2020 when the current budget, bolstered by the UK contribution, ends.

An economically successful Europe will also be more attractive to countries considering a future in the EU, potentially including Scotland as it considers an independence referendum. ‘Back to the Future’ could end up becoming the motto of the EU, as it focuses on making Europe work for its citizens – starting with their pockets!

Colin Imrie is an independent policy analyst in European affairs. He previously worked on EU matters for the UK Foreign and Commonwealth Office and the Scottish Government, and also for the European Commission.