Monetary union can take many years to be sustainable and successful, and the euro is no different, writes Angus Armstrong. He argues that, should the Eurozone proceed with plans for greater political and fiscal union, the UK may encounter a stronger EU in its renegotiation than otherwise foreseen. 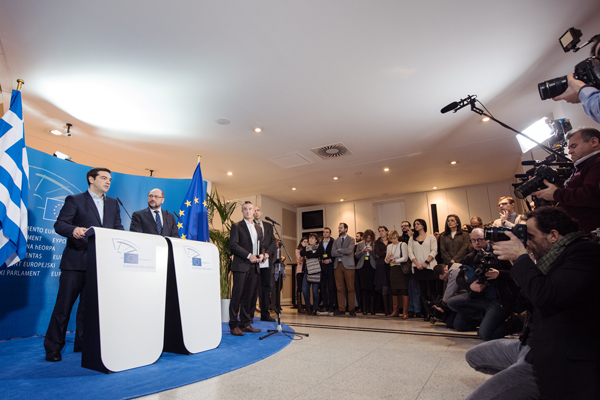 Events unfolding in the Eurozone matter for the UK’s referendum. The euro is the main currency of the EU: only two of the twenty-eight member nations have official opt-out clauses from joining the single currency (the UK and Denmark). What happens to the euro cannot be separated from the EU, and therefore the choice facing the UK electorate.

There has been much ink spilt over the grand observation that the European Central Bank, by capping the emergency support to the Greek banking system, has shown that the euro is not an irrevocable currency among all member nations after all. This is true, and it may be that Greece exits from the single currency system.

A popular school of thought is that the crisis exposes the Eurozone’s well known fault-lines to market forces. Put simply, without political union (a pre-requisite for fiscal union) the project is destined to fail. Events in Greece, whatever the outcome, make the Eurozone more vulnerable, which weakens the resolve of Eurozone leaders and strengthens the UK Government’s hand.

But there is another plausible outcome. To steal from Mark Twain, reports of the demise of the euro are greatly exaggerated. It is less than a year ago that Scottish voters narrowly avoided leaving the oldest and most successful monetary union.

Even in the US, eighty years after Congress was given monopoly power to issue the dollar, nine states went bankrupt and three separate currencies were circulating two decades later. It took the US one and a half centuries to achieve currency and financial union. The EU is attempting to do this in sixteen years.

Everyone must see that Greece needs substantial debt relief. Ever since the first package over five years ago, the Troika’s and creditors’ ‘nickel and dime’ approach to returning to solvency has been unconvincing.

The only rational argument for the creditors’ trenchant response is the cost of being seen as ‘lenient’, and giving substantial debt relief when agreed reforms are incomplete, will lead to requests from others nations for similar treatment in future.

Is there any evidence that this is tough love rather than bloody-mindedness?

In response to the crisis, the European Commission has laid out impressively clear plans towards ‘full banking, economic, fiscal and political union’ in its Blueprint for a Deep and Genuine EMU. Of course talk is cheap but the creation of the European Banking Union already crosses the Rubicon of pooling fiscal resources of Eurozone member states.

There is also an alternative possibility to the Eurozone countries becoming more vulnerable if Greece leaves the euro.  If the EU can really deliver its blueprint, this would surely make the system stronger. And member states are less likely to run excessive deficits if they know they face such harsh costs.

It is in the UK’s interests to see a strong and vibrant EU, including Greece. If this is to be achieved, Eurozone countries must deliver on their own reform agenda. If this is achieved, the UK may find itself negotiating not with an EU willing to acquiesce, but an EU with a stronger Eurozone core with greater sharing of sovereignty.

Shortlink for this article: edin.ac/1UTTHKF

Dr Angus Armstrong is Director of Macroeconomics at the National Institute of Economic and Social Research and Visiting Professor in Finance and Macroeconomics at Imperial College London. His expertise includes international banking and financial policy and he was previously House of Lords special adviser on Scottish independence.
.