As part of the Imagine Europe project, Clare Llewellyn and Laura Cram compare election polling with Twitter data to explore how accurate a reflection discussion on social media gives of public opinion on the EU more generally. 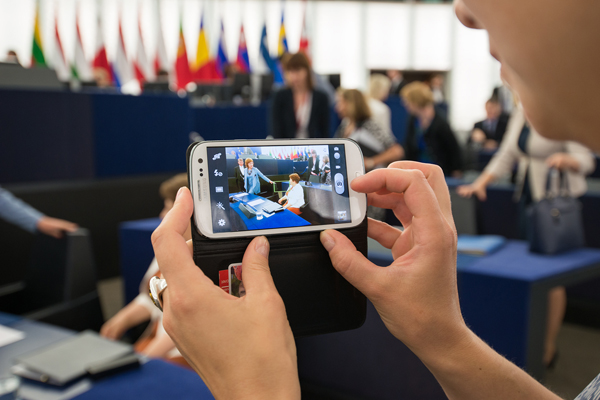 Poll data isn’t always reliable. As we all remember, polling data from the 2015 UK general election suggested that the race between the Conservatives and Labour was very tight, when in fact the election produced stronger support and ultimately victory for the Conservative party.

We find there was a difference in results when we compare phone polls and internet polls from this election. Labour tended to do better in online polls, and the Conservative fared better in telephone polls.

General Election 2015: Why Do Phone and Internet Polls Give Different Results?

There is another clear divide in this election, not only the one between Labour and the Conservatives. There is also a stark difference between telephone and internet polling. The latest Guardian/ICM survey (a phone poll) has the Conservatives ahead by six points.

Several reasons are thought to have caused these bad predictions. An investigation for the British Social Attitudes (BSA) survey by NatCen Social Research found that, in general, Conservative voters were harder to find. Labour voters were more likely to answer the phone or take part in online surveys.

Analysis: What Went Wrong with Our GE15 Polling and What Will We Do to Improve?

All the pre-election polls in the 2015 general election were wrong, significantly overestimating Labour support and underestimating Conservative support. We have conducted extensive research on YouGov data for that election and have identified the source of most of the error and how to correct it in the future.

The Neuropolitics Research Lab at the University of Edinburgh is currently investigating attitudes in the UK towards the EU in respect of the upcoming referendum. We are using Twitter to gain up-to-the-minute insight into what people are discussing in relation to the EU on social media. How should we use the information on polling methods to inform our analysis of attitudes on the EU?

According to the Collaborative Social Media Observatory (COSMOS), Twitter users are generally youthful (67.5 per cent of users are 16-22) and generally female (based on names they could identify a gender – 47 per cent female, 45 per cent male, 8 per cent unisex). There may also be bias towards those in the creative sector. However, they do find evidence of a large number of older users – with likely over 500,000 users over 50 in the UK.

Who Tweets? Deriving the Demographic Characteristics of Age, Occupation and Social Class from Twitter User Meta-Data

This paper specifies, designs and critically evaluates two tools for the automated identification of demographic data (age, occupation and social class) from the profile descriptions of Twitter users in the United Kingdom (UK).

Quinlan et al (2015) found, when investigating an online discussion for BBC News Have Your Say in the Scottish independence referendum, that social media discussion was ‘not a panacea for referendum deliberation’. They found that there were low levels of discussion, the debate was dominated by a few members and that those involved in discussions were 91 per cent male.

Online Discussion and the 2014 Scottish Independence Referendum: Flaming Keyboards or Forums for Deliberation?

Referendums often fail to live up to a deliberative standard, with many characterised by low levels of knowledge, disinterest and misinformation, negativity and a focus on extraneous issues to which voters are voting. But social media offers new avenues for referendums to incorporate a greater deliberative dimension.

Our observations of the Twitter debate so far have shown that, when comparing pro-Remain hashtags and pro-Leave hashtags, the opinion within Twitter is overwhelmingly pro-Leave. Is this caused by a low level of discussion from those who support remaining in the EU? Is the debate dominated by a few individuals?

We have had occasions where the discussion has indicated a rise in pro-Remain opinion. For example, around the time the referendum date was announced, when Prime Minister Cameron’s letter to Donald Tusk was sent and when the announcement of the new settlement for the UK was made by the European Council.

This may indicate the presence of an interested, but normally quiet, population of Remain supporters on Twitter. It is notable though that, even on those occasions where the Remain presence has risen in the Twitter debate, it has consistently been significantly lower than the pro-Leave presence.

We can compare this to poll data (assuming that the polls are correct this time!), which gives 43 per cent for Remain and 41 per cent for Leave.

The question is whether there is a silent group of pro-Remain voters on Twitter or whether these voters are not represented on Twitter at all. As we discussed above, Twitter users are a subset of the population which is slightly more female, younger and more creative.

There is a consensus that young voters (18-34) are more likely to be in favour of the UK remaining as part of the UK (53 per cent), although these voters are less likely to go out and vote.

The decision over whether the UK remains inside the European Union could depend on whether young people shake off their apathy and vote in sufficient numbers on 23 June, a revealing opinion poll conducted for the Observer shows.

Currently, our subset is indicating an opinion in favour of leaving the EU. Other research has suggested that, in a political social media debate, there would be low participation which would mainly dominated by males. Is our data coming from a small loud minority?

When we look at the proportion of tweets to users over seven months (as of 9 March 2016), we find, in the data we have collected on hashtags, on average 5.26 tweets per user from a total of 1,694,412 users. A mode score for this data would be more useful. Unfortunately, at this point we don’t have the information we need to prove that these users are a small subset who tweet frequently.

It is possible that those intending to vote to leave the EU are passionate about their cause and discuss it more on Twitter. This may result in the high pro-Leave sentiment that we see. Those who respond in opinion polls that they will vote to remain in the EU do not, as yet, discuss the subject widely on Twitter, and only do so when prompted to by an event, such as the announcement of the referendum date or the UK’s renegotiation of membership. If this is true, it is likely that the pro-Remain discussion will increase as the referendum draws closer.