The current citizens’ initiative in Finland on the euro has its roots in public opposition to the single currency, but has no serious prospect of forcing a change, writes Tapio Raunio. He argues that the initiative symbolises the politicisation of the EU in Finland since the start of the Eurocrisis and that, while this has constrained the government’s ability to act in some areas, it has also brought about greater public debate on European issues. 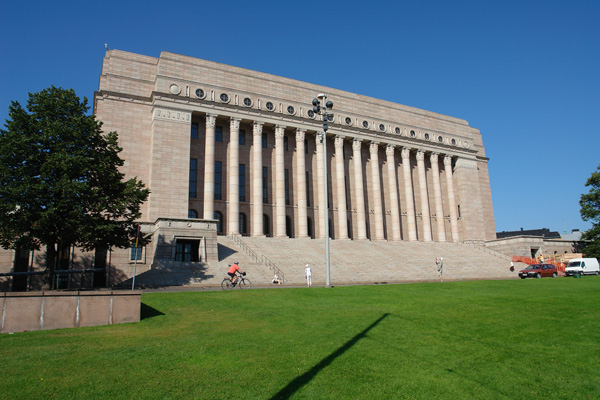 In early March, Paavo Väyrynen handed a citizens’ initiative for organising a referendum on Finland’s euro membership to the speaker of the Eduskunta, the unicameral national legislature. Väyrynen is a senior and very colourful Centre Party politician, who opposed Finland’s EU membership in the early 1990s and has since strongly criticised Finnish integration policy. He is currently an MEP – as he was not offered a lucrative portfolio in Prime Minister Juha Sipilä’s government formed after the April 2015 elections.

The initiative was signed by 53425 citizens (initiatives must have 50000 signatures in order to be considered by the Eduskunta). Väyrynen has argued that exiting the euro area enjoys broad support among the public. He has also suggested that, were the Eduskunta to approve the initiative, Finland could leave the Eurozone without holding a referendum, since one was not held when Finland made the decision to join the single currency in the first place.

Väyrynen has a point. Despite negative public opinion at the time, the Social Democratic-led ‘rainbow coalition’ – a five-party cabinet that included both the most right-wing and left-wing parties in parliament – did not hesitate to lead Finland into the euro area in the late 1990s. The issue never really became politicised: the government controlled around 70 per cent of the seats in the Eduskunta, and Finland’s influential trade unions also supported the euro.

Here, the contrast with the two other Nordic EU Member States is striking. Denmark opted out of EMU in the Maastricht Treaty, and in a referendum held in 2000 the Danes voted in favour of retaining their own currency. In Sweden, a referendum on the euro was held in 2003, but only 42 per cent supported adopting the single currency.

Furthermore, the Eurocrisis has resulted in significant domestic politicisation of European integration in Finland. Previous broad domestic party-political consensus over the EU gave way to public conflicts over the future of the euro area. The Eurocrisis dominated the 2011 General Election campaign. The populist and Eurosceptic the Finns Party led by Timo Soini achieved a dramatic victory, its vote share increasing from 4.1 per cent four years earlier to 19.1 per cent.

As the other parties attempted to contain the rise of the Finns Party, the discourse became dominated by the defence of national interests and criticism of the expensive Eurozone bailout packages. Not surprisingly, Finnish governments formed after the 2011 elections have needed to take a tough line in Brussels on decisions concerning the euro. At the same time, it is worth emphasising that Finland has supported the various euro area coordination instruments, from bailouts to the ESM, Fiscal Compact and the development of the banking union.

Nonetheless, it is safe to predict that Väyrynen’s initiative will not change the status quo – or even bring about any real debate about euro area membership. Even at the height of the Eurocrisis, the national debate never turned to whether Finland should stay in the Eurozone. All political parties represented in the Eduskunta are in favour of euro area membership, and none of the parties has even flirted with the idea of reintroducing the old national currency.

The Finns Party is definitely Eurosceptic, arguing strongly against deeper integration, but Soini’s rhetoric is further constrained by being in a coalition cabinet where the other two parties (Centre and National Coalition) are in favour of the euro, emphasising the virtues of monetary stability and budgetary discipline and their positive effects on economic growth and job creation.

The increased politicisation of euro area decisions is certainly good news in terms of the alleged ‘democratic deficit’ of European governance. The citizens’ initiative on the euro may not change anything, but it follows a string of Eduskunta debates and confidence votes where the opposition has publicly challenged the government over its EU policy.

Before the Eurocrisis, EU issues were handled almost exclusively behind the closed doors of government and parliamentary committees. The goal was finding broad political backing for the government, which represents Finland in EU bargaining.

Now that the fragile partisan consensus over integration has ended, there is much more public debate and media coverage of certain European matters, such as the Eurozone bailouts and the refugee situation. As a result, the Finnish government is more constrained in EU decision making on such issues, but at least its positions should reflect better the prevailing mood of public opinion.

Prof Tapio Raunio is Professor of Political Science at the University of Tampere. His research interests include European representative democracy, the role of national parties and parliaments in European integration and Finnish politics.