The Eurocrisis has brought about a number of substantial reforms in the realm of EU economic governance. In defiance of conventional thinking, it seems that these forms of policy change have preceded policy learning, write Jonathan Kamkhaji and Claudio Radaelli. They argue that, while the causal relationship between learning and change varies in each crisis, evidence from the Eurocrisis suggests that classic inferential policy learning was not a determinant of change, but that change took place in a contingent fashion first and that it then prompted ex-post learning processes. This leads them to claim that research should incorporate elements of human cognition into the study of crises. 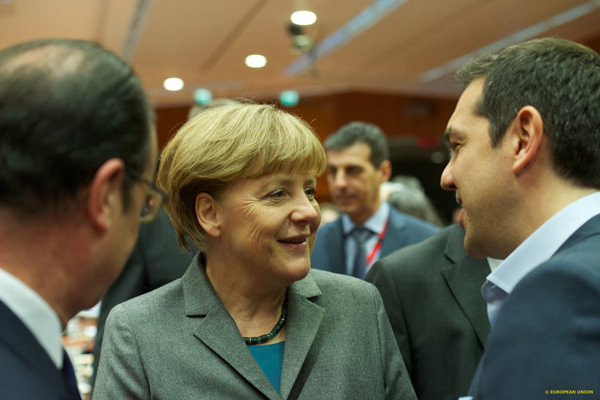 What is the causal relationship between crisis, learning and change? The European Union has responded to the crisis of the euro area in ways that are surprising for integration theory and theories of crisis management. Indeed, the classic conditions that transform a crisis into an opportunity for learning and major reform have not been met.

The original shock came from the US and financial markets – EU policymakers could not govern these factors, only respond to them. Absent visionary leaders, heads of state and prime ministers appeared constrained by narrow short-terms electoral goals, and the European Commission seemed unable to exercise entrepreneurship.

The paradigm of austerity was dented and deeply contested, within economics and in real-world politics, thus making the empirical base for decisions more uncertain than ever. The decision making structure of the EU was and remains fragmented, with the European Council, individual leaders, the Commission and the European Central Bank jockeying for position. The crisis has been long, with several episodes of intra-crisis change that have not provided any breathing space to reflect on what has been done and to probe the robustness of reforms.

Yet it moves! – as Galileo said. A new governance architecture for the euro area has emerged and new instruments for fiscal and policy coordination like the European Semester and the Six-Pack Rules are now in place. The puzzle is: how has the EU been able to produce change without having met the conditions for learning?

In a recent article and seminar at SKAPE at the University of Edinburgh, we have questioned the conventional identification of the cause-and-effect relationship provided by theories of crisis management, integration and policy learning. Drawing on models of contingent learning developed within psychology and behavioural economics, we theorise that surprise produces behavioural change via a fast-paced associative mechanism and that policy learning follows change.

We argue that crises can produce sudden change via fast-paced processes of cue-outcome associations. That change in turn triggers policy learning – thus reversing the causal mechanism, and that feedback reinforces the mechanisms of learning and locks in change. To achieve this, we draw on experiments and causal arguments based on how individuals and groups behave. This gives us strong micro-foundations.

Our interpretation is at odds with the classic argument that to achieve non-incremental change actors must learn in the first place – that is, they first have to acquire, accumulate, process and exchange knowledge and then behave accordingly. One way or the other, they draw inferences from their experience and this impacts on behaviour.

In short, learning is the cause of policy change. The textbook example applied to EU integration is the process that led to the Maastricht Treaty. The road to monetary integration took more than twenty years to be paved. It involved decisive political entrepreneurship and ideational convergence over time.

But now let us consider two key dimensions of learning. One dimension is cognitive. Learning is about an individual who, faced with exogenous changes, considers whether his/her preferences are still satisfied when the environment differs from the past. This individual deliberates whether to carry on with current behaviour, or to choose something else.

This involves cognition, or, bluntly, something that goes on inside the mind. The other dimension is situational: the connection between events and consequences (or cues and outcomes) is not always the same. It depends on the characteristics of the situation. Hence the event X leads to Y or Z depending on the situational context.

For these theorists, it is exactly the lack of experience about the relationship existing between a given stimulus and an outcome that generates what we would call surprise. This surprise about the causal relationship, in turn, triggers learning in associative form. This mechanism of behavioural adaptation seems to be a more appropriate depiction of the learning processes occurring during crises rather than the classic take on cognition in policy learning models.

To elaborate on these findings: resilient beliefs systems may not be a major hindrance to change. Surprise may trump priors – narrow considerations about elections, the lack of vision, etc – via self-reinforcing mechanisms of association between new stimuli and outcomes.

We then examine the situational determinants of learning. These are both structural and interactive. Structural determinants refer to the complexity of the environment and/or complexity of tasks, the degree of inter-dependency among actors (often operationalised as number of players) and how much information is available about the environment, the resources and the actors.

This is yet again at odds with conventional views – where uncertainty, poor information and the wrong feedback hinder the mechanisms of learning. But it is not at odds with experimental evidence. In short, we expect inferential learning to take place after change, provided that feedback is sufficiently strong to anchor the lessons learned.

In our forthcoming article, we probe this causal argument empirically by process-tracing the key episodes that marked the emergence of EU responses to the crisis of the euro area in 2009-2010. We find that change-or-die choice architectures nudge accidental federalists. Bankers like ECB President Mario Draghi go on stage and make extraordinary commitments to do ‘whatever it takes’ to save the euro.

German Chancellor Angela Merkel may defy conventional political science wisdom about elections and short-term horizon: she may outrage her political opponents, constitutional judges, foreign ministers and her own coalition partners. This is what she did by reneging on the no bail-out clause of EMU and agreeing on an EU-based rescue package for Greece in April 2010. And that turned out to be the trigger of even more profound changes.

It would be wrong to use the lessons of our exercise to make predictions. We argue that our mechanism was present in this crisis, but other crises of the EU, past and present (think of the refugee crisis) may have very different underlying learning mechanisms. But our conclusion is that there are opportunities to exploit by incorporating the study of human cognition into integration theories and our models of crisis management.

Our exploration of learning is not about what the EU, or the federalists, or anyone else should do. It is above all a call for a new research agenda in the field of policy learning, to make this field more receptive to and interested in micro-foundations drawn from the study of human cognition.

The authors thank SKAPE at the University of Edinburgh for organising a seminar on the paper on 4 February 2016. Claudio Radaelli also acknowledges the support of the Jean Monnet Chair in Political Economy. The forthcoming article ‘Crisis, Learning and Policy Change in the European Union’ will appear in early view later in spring 2016 in the Journal of European Public Policy.

Jonathan Kamkhaji is PhD Candidate in Politics at the University of Exeter. He is currently finalising a dissertation on fiscal policy co-ordination within the Economic and Monetary Union. He was previously Research Fellow at University of Exeter and he is a short-term consultant for the World Bank.

Prof Claudio Radaelli is Professor of Political Science, Jean Monnet Chair in Political Economy and Director of the Centre for European Governance at the University of Exeter. His research interests include European public policy, Europeanisation, policy learning, regulation and research design.