Brexit has already prompted a number of academic contributions examining the tax implications for the UK, in the areas of both direct taxation (income, profits and capital) and indirect taxation (VAT). At the same time, the European Council’s April 2017 Brexit negotiating guidelines state that any future agreement ‘must ensure a level playing field, notably in terms of competition and state aid, and in this regard encompass safeguards against unfair competitive advantages through…tax…measures and practices’. In that context, future convergence (or divergence) between EU and UK tax law is bound to play an important role in any trade deal between the EU27 and the UK. This holds particularly true in the area of direct taxation, where progress in the EU’s harmonisation efforts has been limited to approximating the different national tax systems, in order to improve the Single Market. The UK has been of the strongest opponents of tax harmonisation. 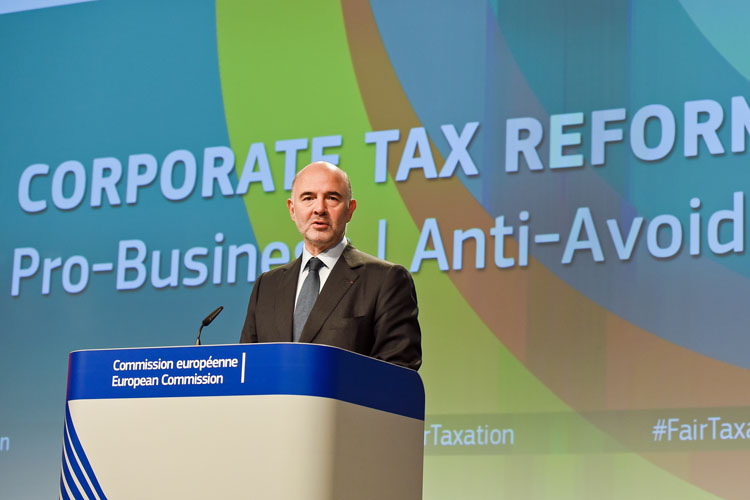 The UK’s withdrawal from the EU gives rise to two interconnected questions. The first is whether Brexit makes it more likely that the EU27 will accept the European Commission’s proposals for further harmonisation in direct taxation (especially on establishing a Common Consolidated Corporate Tax Base – CCCTB). The second is to what extent the UK will have to continue to follow EU direct tax legislation after Brexit in order to agree and maintain a trade deal with the EU.

Since the beginning of the European project, reports and analyses have highlighted that different corporate tax regimes in the Member States adversely affect the functioning of the Single Market. In particular, the 1962 Neumark Report identified early on the three key objectives related to direct taxation – eliminating double taxation, enhancing cooperation between national tax authorities and stepping up efforts against cross-border tax avoidance. These objectives have been gradually broadened to include: (1) eliminating all other tax obstacles hindering cross-border (business) activities and investments within the Single Market, (2) enabling cooperation between tax authorities to exchange information and assist one another in recovering tax claims and (3) countering tax evasion and tax strategies that attempt to reduce liabilities by misusing rights under EU law.

Following failed attempts by the European Commission to advance proposals to harmonise corporate tax rates, five pieces of legislation on double taxation have been passed since 1990. The Merger Directive aims to ensure ‘tax neutrality’ for cross-border restructuring operations and for transfers of residency of European (Societas Europaea) companies from one Member States to another. The Parent-Subsidiary Directive eliminates double taxation on the cross-border distribution of profits between subsidiaries and parent companies in different Member States. The Savings Directive (later replaced) eliminated double taxation on savings income and the Interest-Royalties Directive double taxation on payments of interests and royalties within corporate groups. The multilateral Arbitration Convention (1990) also eliminated double taxation on transfer pricing. The latest and most far-reaching legislation is the Directive on Double Taxation Dispute Resolution Mechanisms, adopted by the EU Council in October 2017 and aimed at eliminating double taxation in all remaining areas besides those outlined above, by providing a procedural mechanism involving compulsory arbitration to settle divergences between national tax authorities which would otherwise give rise to double taxation.

In the courts, companies and individuals have from the mid-1980s challenged national direct tax provisions allegedly hindering the exercise of fundamental freedoms, in particular the freedom of establishment, the free movement of workers and the free movement of capital. National tax provisions of both home and host Member States have regularly been found by the European Court of Justice (ECJ) to be in breach of EU law, creating a process of negative integration specifying which direct tax provisions Member States should not introduce or maintain  and obliging them to amend or to repeal such provisions. The ECJ has consistently stated that, although direct taxation falls within the competence of Member States, they must exercise that competence consistently with EU law. Overall ECJ case law has constrained Member States from using direct taxation to create differential treatment between domestic and comparable cross-border situations within the EU, thereby taking important steps toward creating a ‘level playing field’ across the Single Market.

Tax authority cooperation on direct taxation is based on two key directives. The Administrative Cooperation Directive provides for three forms of exchange of related information: exchange on request; spontaneous transmission of information from one tax authority to another about individual cases; and automatic exchange of information (AEI) an annual systematic transmission of information without previous request about all taxpayers earning specific categories of income. The Recovery Assistance Directive allows national tax authorities to assist each other in collecting taxes through the use of a uniform ‘European enforcement instrument’ issued in one jurisdiction and directly enforceable across the EU.

On tax evasion and avoidance, the EU (and in particular the Commission has focused more on soft law instruments and state aids provisions of the EU treaties. The Commission presented its first major ‘tax package’ in 1997, focused on a non-binding Code of Conduct for Business Taxation. This code, accepted by the EU Council as a political agreement in December 1997, focused on eliminating ‘harmful’ tax competition (ie special tax regimes) while accepting ‘fair’ tax competition (ie general acceptable tax bases and rates). The recent Anti-Tax Avoidance Directive is the most wide-ranging EU legislative measure to date affecting national direct taxation systems. The directive must be transposed into national legal orders by December 2018 and will apply from January 2019.

As it has developed, EU law has left Member States free to design the essential features their own tax systems, while reducing discretion to limit fundamental freedoms and to damage each other’s revenues through harmful tax competition. EU law has provided Member States with legal instruments to assist each other in applying, ultimately, their own tax laws. The European Commission long-stated goal of introducing a Common Consolidated Corporate Tax Base is intended to further these objectives and would be the most ambitious project ever pursued by the EU on direct taxation. The proposed CCCTB regime, which would be compulsory only for big business, parent companies and subsidiaries, would determine a company’s taxable base according to a uniform set of rules, enable the aggregation of EU-wide profits and losses and facilitate the appointment of tax revenue between relevant Member States.

The UK has been a consistent opponent of the Commission’s efforts to harmonise direct taxation. In fact, the first two substantive direct taxation directives (the Merger Directive and Parent-Subsidiary Directive) were originally submitted in 1969 (before the UK’s accession), but were then subject to more than 20 years of negotiations before their approval by the EU Council in 1990. The UK has had no hesitation in using its veto in the Council, deriving from the unanimity requirement on taxation, to block undesired tax proposals and to obtain considerable compromises (including for the two directives above). In recent years, the UK opposed the proposal to introduce an EU Financial Transaction Tax, then challenged the proposal before the ECJ when it was taken forward under enhanced cooperation. It has also opposed the CCCTB and a ‘web tax’ on the profits of digital multinationals.

After Brexit day, EU tax law will no longer apply to the UK, unless agreed otherwise as part of the transition or future EU27-UK relationship. The scope for potential divergence on tax after Brexit rests in those areas where the UK government could perceive current EU law as contrary to national interests. Presuming that post-Brexit the UK would still like to attract foreign investment, it would likely keep the tax exemptions which it initially had to introduce as a result of the Merger Directive, Parent-Subsidiary Directive and Interest-Royalties Directive (as described above). On the other hand, the UK might be interested in repealing provisions forbidding state aid and reintroducing provisions considered to be harmful tax competition, with aim of giving UK-based businesses competitive advantages.

The UK might also want to reintroduce specific national provisions prohibited over the years by the process of negative integration, such as only allowing parent companies to offset losses from UK subsidiaries against profits or applying different anti-tax avoidance rules to attract companies to bring profits earned in other European jurisdictions to be taxed in the UK. However, any potential advantages could be offset, at least in part, by the UK’s legal obligations under WTO rules on subsidies and its membership of the OECD. The OECD in particular has adopted commitments to combat harmful tax practices implemented by tax havens and to counter so-called ‘Base Erosion and Profit Shifting’ (BEPS) of international tax avoidance by multinationals.

After Brexit, the EU will lose its leading opponent to harmonisation of direct taxation, which could make further integration easier. Proposals for the CCCTB and other tax approximation measures certainly have increased chances of being adopted, even by only though enhanced cooperation. Although other EU countries, including Ireland and Luxembourg, have also opposed the CCCTB, they have not gone as the UK, particularly on hindering the plans of select Member States to move forward using enhanced cooperation. The negative integration tendencies of the ECJ could also be strengthened, with the UK government no longer intervening in support of Member States when their national tax measures are taken to court. Significantly, the European Commission has stated its intention to put forward in 2018 new tax proposals under Article 48 TFEU, attempting to bypass the unanimity requirement by saying that taxation is an ‘internal market matter’.

Based on the Council’s Brexit negotiating guidelines, the EU27 will only enter into a trade deal with the UK if its tax regime does not create competitive disadvantages for EU-based businesses and if the UK does not start a ‘race to the bottom’ by turning itself into a low-tax jurisdiction. In terms of the UK’s margins of manoeuvre on tax after Brexit while still permitting a trade deal with the EU, it could likely act independently on aspects of the tax system not currently covered by EU law and ECJ case law – for example, corporate tax rates, which are left to Member States. On the other hand, the UK would not be able to diverge from EU law on state aids rules, anti-tax avoidance provisions and the tax freedoms established by the ECJ. The UK would also arguably need to continue to cooperate with EU national tax authorities and share information, similar to current EU arrangements. If the CCCTB is eventually adopted, even under enhanced cooperation, the UK may well need to ensure that its own rules on determining the tax base are similar to CCCTB rules.

Brexit may serve as a turning point for EU tax law and enable further integration. On the negotiations, the key challenge for the EU27 is to remain consistent with its Brexit guidelines and ensure that a transition and trade deal respect EU tax rules. If this challenge is met, EU tax law will have a strong external influence on the UK after Brexit. In fact, the inability for UK-based businesses to enjoy competitive advantages versus EU-based businesses may perhaps ultimately become one of the factors which pushes the UK to reconsider Brexit itself.