Public opinion on the EU varies in the different parts of the UK, and views within each of the UK nations have shifted markedly since the Common Market Referendum in 1975, writes Charlie Jeffery. He suggests that identity could play an important role in voters’ decisions at the EU referendum, and that the outcome could have constitutional implications for the UK. 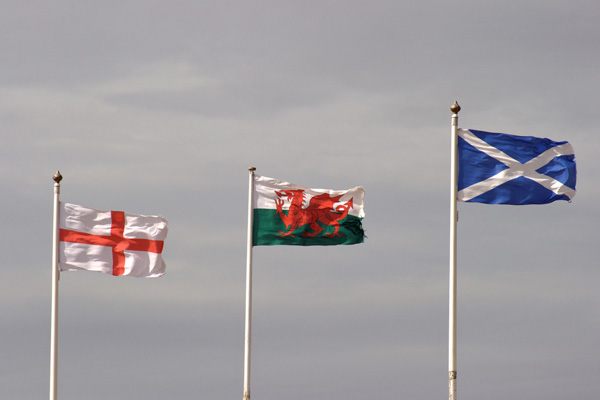 Scotland has long had a reputation for being less sceptical about European integration than the rest of the UK and, in particular, England. At the level of political leadership, that is obviously enough the case. Since the late 1980s, when the Labour Party and the Scottish National Party each became unambiguously pro-EU parties, Scotland has lacked credible voices in mainstream politics prepared to pursue a Eurosceptical approach.

That has in part to do with the weakness since then of the main forum the UK has had for airing opposition to the EU: the Conservative Party. Just as the Conservatives under John Major were tearing themselves apart over Europe, Scotland turned its back on the party, returning no MPs in Scotland in the 1997 UK election, and just one at every UK election since. The Conservative Party in the Scottish Parliament has not made a big issue out of Europe and more recently its leader, Ruth Davidson, has taken a clearly pro-EU position.

With Nicola Sturgeon, First Minister and leader of the SNP, and Kezia Dugdale, Scottish Labour leader, also clear in their support for EU membership (along with the minor parties in the Scottish Parliament, the Liberal Democrats and the Greens), Euroscepticism is cast to the margins.

Its most prominent advocates are David Coburn, UKIP’s one Member of the European Parliament in Scotland, Jim Sillars, the veteran anti-EU figure in the SNP and one or two once prominent, former Labour MPs like Ian Davidson and Nigel Griffiths. The contrast of these with the vigour of Sturgeon, Dugdale and Davidson is striking. The mainstream in Scotland’s political leadership is a pro-EU one.

But there has always been some doubt as to whether ordinary Scots shared this pro-EU position. It was long thought that ordinary Scots were not that different in their views on the EU than people elsewhere in the UK.

As we show below, they are. Scots are now significantly more positive about EU membership than people in England and Wales (though not, it seems, Northern Ireland). These differences matter not just for their impact on the EU referendum outcome on 23 June 2016, but also for their possible implications for the UK’s internal constitutional debate.

The Brexit and Scottish independence debates have become firmly linked. Nicola Sturgeon, made this point shortly after the Scottish referendum when she argued that any ‘Leave’ outcome in an EU referendum would need to be endorsed in each part of the UK, effectively claiming a Scottish veto over a UK decision to leave.

Sturgeon has made the same point on a number of occasions since, and has gone further by tying the EU referendum outcome to the question of Scotland’s continuing membership of the UK. Before the UK general election in May 2015, she said a second Scottish referendum would only be called if there were ‘material change’ in the conditions of Scotland’s relationship with the rest of the UK.

In a Brussels speech in June, shortly after the SNP’s astonishing success in that election, she made clear that a UK vote to leave the EU overriding a Scottish preference to stay ‘could be one scenario’ producing such material change. And at the SNP conference last October, directing remarks at David Cameron, she made clear that ‘in those circumstances, you may well find that the demand for a second independence referendum is unstoppable’.

She has made a similar point on several occasions since, most clearly perhaps in a TV interview in February 2016: a second Scottish referendum would ‘almost certainly’ be triggered if Scotland votes to stay within the EU but the UK votes to leave. As Nicola McEwen discusses in the final chapter of Britain’s Decision, there might in fact be a little more nuance underlying Sturgeon’s words. But undeniably the stakes have been raised.

What Scotland (and England, Wales and Northern Ireland) Think

That is all the more the case given that people in different parts of the UK now have very different views on the EU. Figure 1 below presents data from opinion polls conducted from September 2015 (when the referendum question wording: ‘Should the United Kingdom remain a member of the European Union or leave the European Union?’ was confirmed) to March 2016.

The table sets out the headline findings of ten polls with all-England findings, fifteen Scottish polls, four from Wales and two from Northern Ireland. All had sample sizes of at least 1000 respondents and all were conducted by reputable polling companies. ‘Don’t know’ and ‘wouldn’t vote’ responses have been excluded to provide a simple Remain/Leave split.

The table needs to be read with some caution. These are polls done in different places on different days by different companies. Only in Scotland and England has there been regular polling. Polling is especially patchy in Northern Ireland. This said, there is much to note.

The four UK nations divide into two pairs. England and Wales appear split down the middle. By contrast, Scotland and Northern Ireland are firmly in the ‘Remain’ camp. Only one poll has recorded (just) less than a 60 per cent majority in Scotland for remaining, with an average of Remain vote across all polls of over 65 per cent. Northern Ireland (though with only two bunched polls) appears even more committed to remain. 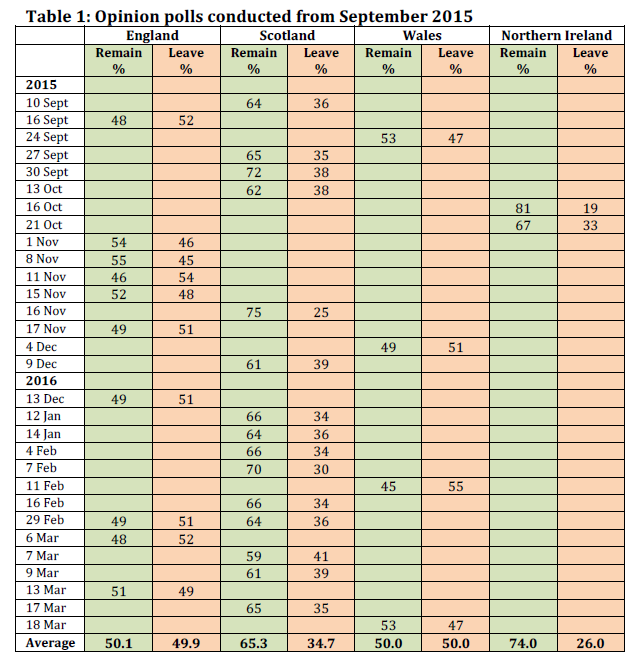 And if we compare the 1975 outcome with the average polling scores from Figure 1, there have been marked swings in opinion in all four parts of the UK (as set out in the final column of Figure 2). England, Wales and Northern Ireland have experienced Damascene conversions, with Scotland also shifting substantially.

There is a further dimension to this pattern of opinion which should be noted. Data from the 2014 Future of England survey, a periodic academic testing of public attitudes in England, but also conducted that year alongside parallel surveys in Scotland and Wales, suggests that national identity plays a significant role in shaping opinion on the EU in England.

The 2014 survey used the so-called Moreno identity scale, which asked survey respondents in England to place themselves on a five-point scale with ‘only British’ at one end and ‘only English’ at the other, with intermediate points of ‘more British than English’, ‘equally British and English’ and ‘more English than British’ (the same scale was used for Scotland, substituting ‘English’ with ‘Scottish’, and similarly in Wales).

Figure 3 shows how responses to the remain/leave options in an EU referendum differed across respondents in different positions on the Moreno identity scale (‘X’ refers to English identity in England, Welsh identity in Wales and Scottish identity in Scotland).

The first column of figures shows the overall responses, so 37 per cent chose ‘Remain’, and 40 per cent ‘Leave’ in England (the rest saying they did not know or that they would not vote). Wales leant the other way, with a 39:35 balance just in favour of remaining. Scottish respondents who gave a view did so by the clear margin of 48:32.

The other columns look at the impact of identity. In the Welsh and Scottish cases, national identity (either British or Scottish/Welsh) does not appear in any consistent way to structure attitudes on EU membership. But in England there is a very different picture. Strikingly, in the last four columns of Figure 3 there is a clear, broadly linear relationship in England in which opposition to EU membership increases the more English/less British the respondent feels.

The more English respondents felt, the more likely they were to want to leave the EU. Those feeling only Welsh/Scottish in Wales/Scotland were close to the average level of support for leaving the EU. So even though in absolute terms English attitudes on Europe are close to those in Wales (but not Scotland – see Figure 1), they are distinguished in England from those in both Scotland and Wales by their clear association with English national identity.

Whose ‘Material Change’ Might We be Talking About on 24 June?

At this point, we can return to the domestic implications of the EU referendum. We noted at the start of the article how the referendum could reignite the Scottish independence debate. For example, if England were to vote something like 54 per cent to leave – as in the 11 November poll in Figure 1 – an overall ‘Leave’ outcome would be likely even if Scotland and Northern Ireland were strongly in favour of remaining, simply by English weight of numbers. So, in that scenario, Nicola Sturgeon might well be talking of material change and a second Scottish referendum.

But, equally, a slimmer English majority – a number of polls in Figure 1 put the figure at 51-52 per cent – could be outweighed by the clear preference in Scotland and Northern Ireland to stay. In that scenario, we could expect a number of prominent voices complaining of England being kept in the EU against its will, and perhaps challenging the legitimacy of the result in a ‘reverse-Sturgeon’, calling for an English veto over the choices of those outside England.

The incipient stirrings of an English nationalism, nurtured by the Conservatives in the 2015 UK general election campaign and – as Figure 3 suggests – with a strong of dimension of Euroscepticism as a component, could well find a more robust platform, perhaps identifying a ‘material change’ in England’s relationship with other parts of the UK and seeking to redefine that relationship. Scotland may not be the only driver of change within the UK.

Of course, if everyone voted in line with the average of the polls of the last few months, the UK would just about remain in the EU, with no part of the UK opposing that decision – perhaps closing the issue down for a generation. But don’t count on it.