The difference of the EU referendum vote in Scotland versus the whole UK and the so-far limited inclusion of the Scottish Government in formulating the UK’s Brexit strategy have created genuine political tensions, writes Laura Cram. She argues that the question of Scotland’s constitutional future has always been much more an issue of democratic control and voice, rather than nationalism or idealistic visions of independence, and that this remains the case in the Brexit context. 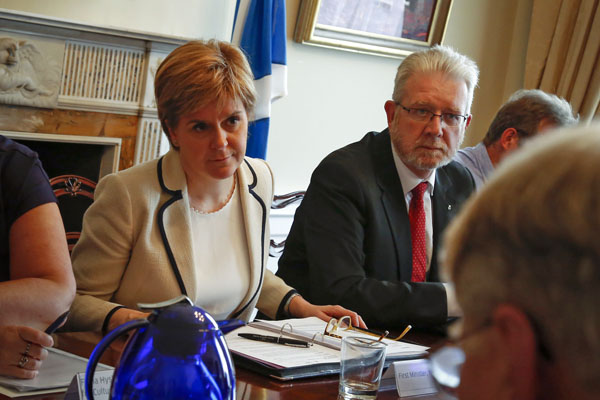 Immediately following the UK referendum on EU membership, the First Minister of Scotland established an expert Standing Council tasked with advising on securing Scotland’s relationship with the European Union. First Minister Nicola Sturgeon stressed at the opening meeting of the Council that every alternative, from full independence to doing nothing, would be considered. Maintaining access to the Single Market and the rights associated with free movement were identified as the emerging ‘red lines’ in the battle to retain Scotland’s relationship with the EU.

More specifically, the five key Brexit tests identified by the First Minister are the extent to which any Brexit solutions preserve key interests viewed to be related to Scotland’s relationship with the EU: democracy; economic prosperity; social protection; solidarity; and influence. Although the prospect of a second independence referendum has been placed firmly on the table, Scottish Government efforts so far have been multi-track: (i) advocating a ‘soft’ Brexit solution UK-wide; (ii) identifying how best Scotland’s relationship with the EU can be salvaged in the light of the various potential Brexit scenarios that might unfold at UK level; and (iii) preparing for the possibility of a second independence referendum.

However, we should be in no doubt that the difference between the ‘red lines’ emerging from Scotland and those from other parts of the UK, including those like London and Northern Ireland that also voted Remain, is that the Scottish Government holds the independence wild-card in its deck. The Scottish Government’s claim to moral authority on the EU issue is strong, even amongst some erstwhile opponents of independence. The image of Scotland being dragged out of the EU against its will is powerful.  In Scotland, not only did 62 per cent of the vote support Remain, but there was also a majority for Remain in every local authority throughout the country.

The result reflected a unique consensus amongst the Scottish political party leaders that EU membership was important for Scotland. Following the referendum, the Scottish Parliament gave First Minister Sturgeon a mandate to hold direct talks with European institutions and with other Member States to seek to protect Scotland’s place in the EU. Our analysis of Twitter conversations about the EU referendum found the hashtags #indyref and #indyref2 to be two of the top ten hashtags most used by those talking about the Brexit referendum in Scotland on Twitter.

The Scottish National Party government was re-elected in May 2016 on the basis of a manifesto stating that it would be acceptable for the Scottish Parliament to propose a new independence referendum ‘if there was a significant and material change in the circumstances that prevailed in 2014, such as Scotland being taken out of the EU against our will’.

UK Prime Minister Theresa May, recognising the already precarious relationship between Scotland and the UK and the potential for the Brexit decision to exacerbate this, made a very speedy visit to Scotland – within days of taking office. At that meeting, she stated that the UK Government would adopt a UK-wide approach to negotiations on Brexit before triggering Article 50 and that she wanted the Scottish Government to be fully engaged in those discussions.

Early comments from the new Chancellor, Philip Hammond, stating that there would be no special deal for Scotland, were reinforced by Prime Minister May at the Conservative Party conference, and quickly revealed the limitations likely to be placed on such engagement. Subsequent actions, such as the creation of the PM’s Brexit cabinet committee, with no permanent representation for the devolved nations, swiftly gave the lie to the commitment to fully involve Scotland in Brexit negotiations.

Last Monday’s Joint Ministerial Council meeting offered little in the way of reassurance – with both Welsh First Minister Carwyn Jones and Nicola Sturgeon expressing their frustration after the meeting. Promised regular meetings of the Brexit sub-committee, chaired by Brexit Secretary David Davis, will have to prove ‘meaningful’ to convince at this stage.

Michael Russell has been appointed as the minister to lead the Scottish Government’s discussions with the UK government on Scotland’s future relationship with the EU. He is charged with turning the commitments of the UK government into a workable solution in a highly-charged political terrain.

In a press release prior to his first meeting with David Davis, he stressed the importance of engagement with Scotland in the negotiation process: ‘During our discussions about the future with the nations of these islands, we continue to stress the absolute necessity of Scotland’s voice being an integral and meaningful part of the negotiating process. We will also highlight the importance of respecting and living up to the modern idea of distributed democracy which the different national parliaments and assemblies of these islands embody.’

It was always an error to portray the independence debate in Scotland as primarily driven by an emotional nationalism. The debate on independence was less about an impassioned vision of a free Scotland and more about a mode of delivery of valued goods and services to which those voting were attached. The debate was always more about voice than about identity. In similar vein, the current discussions on Scotland and Brexit and the Scottish Government’s demands have voice at their heart.

Democracy, the need to ensure that Scotland’s voice is heard and its wishes respected, is at the top of the list of the Scottish Government’s five Brexit tests. Influence, making sure that Scotland does not just abide by the rules of the Single Market, but also has a say in shaping these, completes the list.

In the newly released consultation document on a second draft referendum bill, the UK government’s approach to Brexit is presented as limiting the democratic voice of the Scottish public, posing ‘unacceptable risks to our democratic, economic and social interests and to the right of the Scottish Parliament to have its say’. A clear message concerning the need to engage Scotland in a meaningful manner in the Brexit process is presented: ‘We will put forward constructive proposals that will both protect Scotland’s interests and give an opportunity for the UK government to demonstrate that Scotland is indeed an equal partner.’

There is no doubt that retaining membership of the Single Market and free movement are at the top of the Scottish Government’s Brexit wish list, but the challenges of delivering these if the UK pursues the current ‘hard’ Brexit course are well recognised. Red lines have a habit of proving less solid and indelible than they are presented, but the issues of voice and partnership may in fact prove to be the bottom line for Scotland in relation to the UK’s Brexit negotiations and beyond.

This article was originally published by The UK in a Changing Europe.

Prof Laura Cram is Professor of European Politics and Director of the Neuropolitics Research Lab at the University of Edinburgh. Her research areas include European public policy, European identity and the neuropolitics of public policy and identity.