Following the publication of the UK government’s white paper on EU withdrawal, Tobias Lock notes its echoing of previous statements and lack of policy detail. He writes that, while it is to be expected that the negotiations with the EU cannot be completely open, greater clarity on the government’s position would have been preferable. 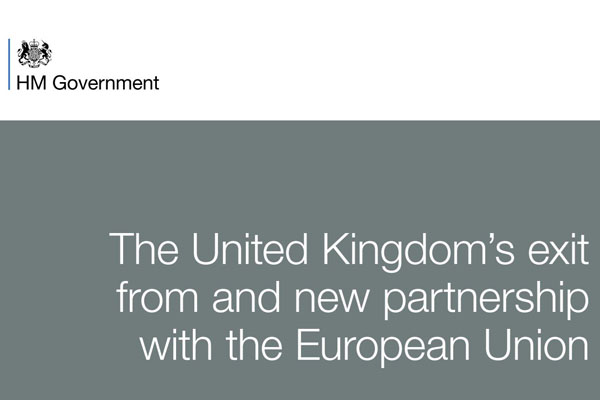 Those expecting the UK government’s white paper on Brexit to significantly enlighten us about what Brexit will actually look like will be disappointed. It reads more like a long version of the Prime Minister’s Lancaster House speech than a proper white paper containing concrete policy proposals. In many respects, it is rather defensive in setting out neatly what current fairly well-working arrangements are, before then stating that for the immediate period after Brexit the UK was trying to ensure these would remain as frictionless as possible.

Between the many repetitive platitudes and vague paragraphs, one does find some points of interest which are worth exploring.

The white paper repeats the announcement of a Great Repeal Bill that will preserve EU law, which is currently applicable in the UK, as domestic law. This step is necessary to avoid gaps in the legal system after Brexit and to give the UK time to decide which bits of EU law to keep and which to abandon. Some commentators had rightly voiced fears that changes to these newly enacted EU rules would be accompanied by a so-called Henry VIII clause, which would empower the executive to make changes to legislation, thereby depriving Parliament of this privilege.

The white paper seems to allay those fears when it says that ‘Parliament (and, where appropriate, the devolved legislatures) will then be able to decide which elements of that law to keep, amend or repeal’. This should be considered a most welcome signal in that it prevents a potentially huge executive power-grab and will allow for proper parliamentary scrutiny at the appropriate level.

Another part of the white paper is dedicated to the question of dispute settlement. The fact that ‘ending the jurisdiction of the ECJ’ is given such prominence in the paper suggests perhaps that the government’s real priority lies with appeasing the Leavers. Be that as it may, as has been clear for a long time now, the government will not accept the ECJ’s jurisdiction over any future trade relationship between the EU and the UK.

The white paper then presents (in particular in its annex) a few examples of dispute settlement arrangements in other trading relationships.  It is notable that it goes through the common examples, with the conspicuous exception of the EFTA Court. This is strange, as the EFTA Court is a much lighter-touch dispute settlement body than the ECJ, in that its rulings are not binding on domestic courts and it does not require direct effect or primacy of EEA law. This makes it clear once again that the EFTA/EEA option is politically a non-starter.

What this omission results in, however, is a rather one-sided, unambitious, and weak conception of dispute settlement. Most of the other examples discussed are inter-party mechanisms, like the WTO Dispute Settlement Body. The only noted exception is investor-state dispute settlement, which is very much disliked in the rest of Europe. It has given rise to a (yet undecided) constitutional challenge in Germany and was one of the reasons the Walloon Parliament initially rejected the EU-Canada CETA trade agreement. A comprehensive free trade deal with the UK that would include investor-state dispute settlement is therefore unlikely to be acceptable to the EU side.

The white paper suggests that the UK will not be aiming for a dispute settlement mechanism that will allow for referrals from national courts, and thus relatively direct access to such a mechanism. It is fair to say that these kinds of references to the ECJ from national courts have greatly enhanced the enforceability of EU law and helped to make the EU’s free trading rules quite a success. The absence of a comparable mechanism is likely to make the trade deal reached in the end inferior to current arrangements, despite stated ambitions to the contrary.

The Role of the Devolved Nations

At first reading, the white paper would seem to be accommodating to the devolved nations when it promises ‘a good deal that works for all parts of the UK’ and when it engages with the Scottish and Welsh proposals concerning Brexit. It makes, however, short shrift of their suggestions to stay in the Single Market by emphasising the guiding principle to ensure that there would be no ‘new barriers to living and doing business within our own Union’ and that ‘common standards and frameworks for our own domestic market’ needed to be retained.

This vision would seem incompatible with a differentiated Brexit, where Scotland is part of the Single Market – with different regulatory standards and with a possible customs border between England and Scotland – and the rest of the UK is not.

A further interesting statement concerns the distribution of powers within the UK after Brexit. A key question will be which level will get to exercise those powers regained from the EU. At present, the devolution settlement would suggest that the EU’s powers over agriculture, fisheries and the environment will revert to Scotland. Yet, the white paper is remarkably lukewarm about this prospect, stating that after Brexit ‘we have the opportunity to determine the level best placed to make new laws and policies on these issues.’

Does this mean that the UK government might re-open the devolution settlement and re-reserve certain powers (maybe in exchange for others)?  Only time will tell, but new constitutional conflict awaits.

EU Nationals in the UK

The white paper is rather vague about one of its flagship ambitions of securing the rights of EU nationals in the UK and vice versa. While it says that securing their status is an early priority for the government, it does not contain any further detail on which people it would like to see qualified for a continued status in the UK – though confusingly the paper makes reference to the right to permanent residence acquired after five years of residence. Nor, indeed, does the paper spell out in any more detail whether the rights so secured include not only the right to continue to work and reside, but additional rights to family unification and equal treatment.

The white paper is ambiguous on free trade. The government’s stated aim is to provide ‘tariff-free trade in goods that is as frictionless as possible.’ It would like customs tariffs to be zero, which is not an unrealistic objective. Yet, it has not quite decided how it would like to achieve this when it says that the UK might ‘remain a signatory to some of the elements of the existing arrangements’.

This would seem to reflect the idea of partial membership of the Customs Union, which is not only unprecedented, but would also contradict one of the government’s other key ambitions: freedom to pursue trade deals with the rest of the world. Such trade deals would be much more difficult if the UK were partly bound by the EU’s tariff regime.

Remarkably, there is no further information on non-tariff barriers, other than a recognition that they exist and that they can be overcome by such things as mutual recognition or harmonisation – both difficult to pursue in the absence of effective enforcement mechanisms. The same goes for free trade in services where the UK has most to gain, where the paper restricts itself to uttering platitudes such as ‘aiming for the freest possible trade’.

The white paper does not offer many new insights into the UK government’s thinking on Brexit. To be fair, any white paper would have been hampered by the fact that the outcome of the UK’s relationship with the EU post-Brexit is subject to negotiations. Nonetheless, one could have expected some more detail on how – in an ideal world – the government would like to see crucial issues such as trade dealt with in the future. Disappointingly, the paper offers next to no detail on anything. Adopting a line from the inimitable Jacob Rees-Mogg: The government has served us some thin gruel.