Kosovo’s recent agreement with the EU is a milestone in its European relations, if not for the contents of the deal itself then for the sidestepping of disagreements over its legal status, explains Lorinc Redei. He argues that the European Commission’s success in managing the terms of the discussion on Kosovo serves as a testament to the continued influence of supranational actors in European integration. 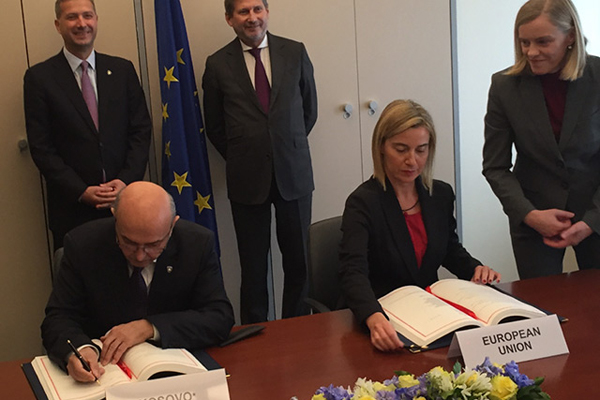 Last month, the European Union signed a Stabilisation and Association Agreement with Kosovo. If this had happened with any other country, it would not be terribly interesting news. But five of the twenty-eight members of the EU do not recognise Kosovo as an independent state. Imagine a club entertaining the possibility of admitting someone whose very existence was denied by one-fifth of its membership. How did this come to pass?

The answer is a decidedly unsexy one: the European Commission has over the past few years managed to technocratise – and therefore depoliticise – the issue of Kosovo’s status in relation to its accession to the EU. Through the use of various creative bureaucratic initiatives, it has defanged the politically sensitive question of Kosovo’s contested sovereignty, and kept its European integration process moving forward. The Commission has done this by introducing the ‘Kosovo*’ notation, creating the ‘Stabilisation and Association Agreement Dialogue’ and showing strategic patience until the Lisbon Treaty’s entry into force gave it international legal personality.

Kosovo’s name has long been a hot-button political issue: until a few years ago, the Council insisted on using the formulation ‘Kosovo under UNSCR 1244’ in its documents, whereas the European Parliament (a cheerleader for Kosovo’s independence) has used simply ‘Kosovo’ since 2006. The Commission, caught in the middle, has tried to placate both fervent supporters and opponents of Kosovo’s sovereignty.

In its documents meant for external audiences, it uses the term ‘Kosovo*’—using the asterisk to relegate the controversy surrounding its status to a footnote, which reads ‘this designation is without prejudice to positions on status, and is in line with UNSCR 1244 and the ICJ Opinion on the Kosovo Declaration of Independence.’ The politically divisive question of sovereignty is thus swept under the rug, allowing substantive issues to be considered in its absence.

A similar instance of creative verbal gymnastics accompanied the Commission’s continuous dialogue with authorities in Kosovo. Over the years, the Commission had launched Stabilisation and Association Processes (SAPs) with all the potential EU candidate countries in the Western Balkans – helping to harmonise their legislation with EU rules and regulations.

Kosovo’s status precluded it from its own SAP but, from 2002, the Commission had established the so-called ‘Stabilisation and Association Process Tracking Mechanism’, mimicking the SAPs it had entered into with Kosovo’s neighbours, and tacking on two extra words. In 2009, this process was renamed the ‘Stabilisation and Association Process Dialogue’, reducing the semantic differences and further aligning the process with the Commission’s relations with other potential EU candidates in the Western Balkans.

The Commission was clear that these inventions were simply meant to give different names to the same substantive processes it was pursuing with other candidate countries. In fact, the creation of such parallel instruments is called ‘mirroring’ by the Commission staff responsible for it.

Finally, the Commission was able to use strategic patience by maintaining the accession process until changes in the Treaty of Lisbon allowed it to take on a more active role – essentially waiting out recalcitrant Member States. Stabilisation and Association Agreements (SAAs) had required ratification by EU Member States, until the Lisbon Treaty conferred legal personality on the EU, allowing the Commission to sign international agreements.

It therefore waited until it could draft an SAA that excluded any provisions that still fell under the national competence of Member States, and thus only concerned areas in which the Commission had exclusive competence. It was then free to initial it (in July 2014) and sign it (27 October 2015), bypassing the need for Member State ratification.

For those of us in academia, it is worth noting that these creative work-arounds are tricks of the trade we all ply: burying controversies in footnotes, renaming existing concepts to circumvent objections to how we use them and waiting on submitting ideas until they become actionable in a policy setting – we are all familiar with these strategies.

More importantly, however, this series of bureaucratic ways to depoliticise Kosovo’s accession process show that the original ideas of the EU’s founding fathers are alive and well. Despite the recent academic literature on the ‘new intergovernmentalism’ or ideas of ‘European disintegration,’ it seems that the notions of Robert Schuman and Jean Monnet still work today.

Politically thorny issues can sometimes be settled by channelling political debates into supranational institutions that aim to resolve them through technocratic means. This can, in turn, benefit everyone – even those national governments which are at the root of the political controversies in the first place.

None of this is to say that Kosovo’s accession to the EU is anywhere close to being realised. After all, membership requires ratification by all current Member States. Kosovo itself is far from achieving the political and economic criteria needed for joining, and it is unlikely that the EU will be willing to take in new members for a long while. Yet the signature of the SAA does suggest that the unpopular, faceless Brussels bureaucrats of the Berlaymont may be much more adept at pushing the European integration project forward than Member States and their political leaders.

Dr Lorinc Redei is Lecturer and Assistant Graduate Student Adviser of the Master of Global Policy Studies Program at the University of Texas at Austin. His research interests include EU foreign policy, the European Parliament’s role in foreign policy and the EU as a normative power.