The EU plays a major role in Kosovo’s development, despite the fact that several Member States do not recognise its independence, writes Gëzim Krasniqi. While the recently signed EU-Kosovo Association Agreement is a significant political step, he suggests, the benefits for Kosovo may be minimal in the short term, and unresolved questions over its sovereignty will continue to hinder future progress. 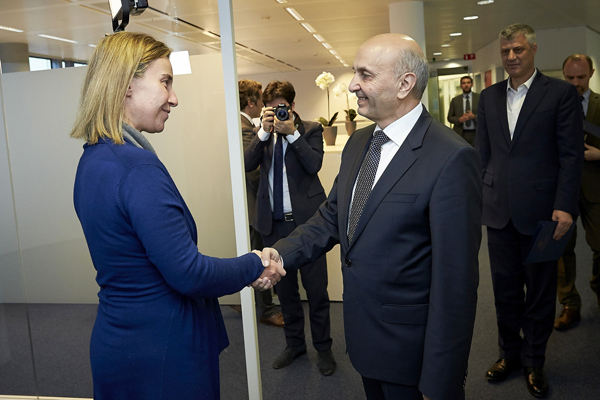 The European Union is by far the main international actor in Kosovo. Its influence in the country has been expanding gradually and stretches into the political, judicial, economic and security spheres. This is a result of more than a decade-long period of direct involvement in stabilisation and reconstruction as well as in (member) state building.

Contrary to other international actors involved in Kosovo, the EU’s role is characterised by a dual capacity of engaging simultaneously in state building (through its Rule of Law Mission – EULEX) and European integration.

Yet, despite a heavy presence on the ground and recurrent promises about Kosovo’s European future, the EU has been struggling to overcome the statehood impasse in Kosovo, as five of its members still refuse to recognise Kosovo’s independence. In turn, this has conditioned Kosovo’s progress towards European integration.

However, in October 2015, Kosovo and the EU signed a Stabilisation and Association Agreement (SAA), marking a breakthrough in the relations between the two. This is just the first step towards closer cooperation with the EU and eventual membership.

Nevertheless, it is a very important development for Kosovo, as it constitutes the first contractual relationship between the two parties and practically puts Kosovo on an equal footing with other countries in the region.

Normally the process for reaching an SAA is based on political and technical criteria. In the case of Kosovo, the signing of its SAA resulted from two distinct, yet interrelated, factors. The first factor is related to changes in the Treaty of Lisbon, which gives the Commission more powers.

Before the Lisbon Treaty, SAAs required ratification by all EU Member States. Now, however, since the treaty conferred legal personality on the EU itself, the Commission can sign certain international agreements on its own.

With several Member States still not recognising Kosovo’s independence, the EU would not otherwise be able to sign an SAA with it. It was the European Commission’s decision to adopt a ‘status neutrality’ approach, referred to as ‘creative ambiguity’ by EU officials, which enabled it to keep a minimum internal consensus and engage Kosovo and Serbia in a dialogue.

The second factor concerns the EU-facilitated political dialogue between Kosovo and Serbia. The two countries have been engaged in this dialogue since 2011, resulting in some 17 agreements. The most important of these is the First Agreement of Principles Governing the Normalisation of Relations reached in April 2013.

This agreement establishes the parameters for the inclusion of northern Kosovo within Pristina’s legal framework, while increasing the level of autonomy for the Serb-dominated municipalities in Kosovo.

Although some progress has been achieved, both countries have failed to implement the signed agreements completely. According to the Big Deal (Civic Oversight of the Kosovo-Serbia Agreement Implementation), so far only four of the 17 agreements have been implemented completely.

Once in force, the SAA will establish a contractual relationship with mutual rights and obligations, covering a wide variety of sectors, including respect for key democratic principles, free trade, education and employment to energy, the environment and justice and home affairs.

Although the SAA offers numerous opportunities, in particular in terms of free trade, given Kosovo’s weak economy, high-level corruption and political instability, it is unlikely that it will have a major impact, at least in the short run.

The EU is Kosovo’s main trading partner, but the trade is mostly one-way and Kosovo has a huge trade deficit. The 2015 European Commission Progress Report on Kosovo paints a picture of a country that has made progress in its relations with Serbia and the EU, but has failed to achieve any substantial progress in other key sectors.

The overriding message is that Kosovo is at an early stage of alignment with European standards in most areas, and the road to membership is still very long. While the government has continued to implement European integration priorities, it has not achieved much progress in reform of the judiciary and in the fight against corruption and organised crime.

Necessary as it might be, the EU’s exclusive focus on the issue of dialogue with Serbia has in many ways undermined democratic consolidation in Kosovo. To begin with, from the very outset the negotiation process has lacked transparency. Many important stakeholders and institutions, including the parliament, civil society and the local population, were practically excluded.

Second, by tying Kosovo’s EU path to the dialogue with Serbia, the EU has enabled the government to circumvent criticism on its lack of reforms and poor results in the fight against corruption. Third, although the whole process focuses on the rights of Serbs in Kosovo, they have been completely sidelined in the process.

This has enabled the Serbian Government to establish direct control over the representation of Serbs in Kosovo, thus practically destroying political pluralism among Kosovo Serbs. In addition, there are increasing fears of further division along ethnic lines as a result of the Brussels dialogue.

These concerns have been used by opposition parties to challenge the government, leading to a serious political crisis. The repeated use of tear gas, blocking the floor of the parliamentary chamber and street protests have led to clashes with police and the arrest of a number of opposition MPs.

Notwithstanding the significance of the SAA, with the EU divided on the issue of Kosovo’s independence and the latter’s integration process inherently linked to the ‘normalisation’ of relations with Serbia, the EU-Kosovo relationship remains a very complex and peculiar one.

The failure of the EU to speak with a single voice is hindering Kosovo’s EU perspective. A case in point is the visa liberalisation process. Kosovo remains the only country in the region whose citizens need a visa to travel to the Schengen Area. Moreover, Kosovo won’t be able to apply for membership without being recognised by all EU Member States.

As a potential Member State, Kosovo – unlike any other EU Member State that has pooled its sovereignty as part of the integration process – is a state with minimal sovereignty. Its sovereignty is limited by the EU Rule of Law Mission, as well as by a whole set of ambiguous modalities emerging from the dialogue with Serbia.

The result has been a form of ‘tripartite sovereignty partnership’ over the territory of Kosovo. Undoubtedly, the EU’s ‘creative ambiguity’ is reaching its limits, and disentangling the sovereignty conundrum remains the paramount challenge in Kosovo’s European integration process.

Dr Gëzim Krasniqi is Alexander Nash Fellow in Albanian Studies at the School of Slavonic and East European Studies at University College London. His research interests include nationalism, nationalist movements, citizenship and politics in the Balkans.