The European Commission’s proposal for a European Energy Union, designed to integrate EU energy markets and energy supplies, is in large part a collection of previous policy goals, writes Antti Silvast. He argues that, in the attempt to connect all the related elements of energy policy together in one, the plans risk being overambitious and ultimately unrealistic. 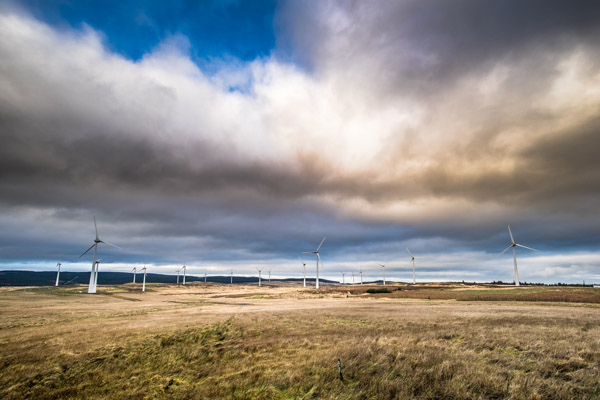 In February 2015, the European Commission announced its plans for a European Energy Union. A major energy strategy, it arrived close on the heels of a number of other ‘unions’ proposed by the EU – such as the Banking Union (for banks and financial actors), the Digital Single Market (digital goods and services) and the Capital Markets Union (financial markets).

The Energy Union aims at establishing a single and resilient ‘integrated continent-wide energy system where energy flows freely across borders’. This European system would pay close attention to the EU’s long-standing energy policy goals: sustainability, competiveness and security of supply.

The strategy contains all of these existing policy visions, and adds further related dimensions to integrating energy systems. These include energy governance procedures, ‘energy diplomacy’ as part of EU’s foreign policy, ‘empowerment’ of consumers, trust and solidarity among Member States and accelerating energy innovations and energy system transformation across Europe.

When Jean-Claude Juncker, President of the European Commission and proponent of the Energy Union, presented the plan to the European Council on 19 March 2015, he appropriately chose to talk about policy convergence under the Energy Union. Clearly the initiative has been intended as a means of bridging not only national energy systems and markets, but also connecting energy policy with policies on the environment, investment, research and innovation, consumer protection and beyond (see Figure 1). 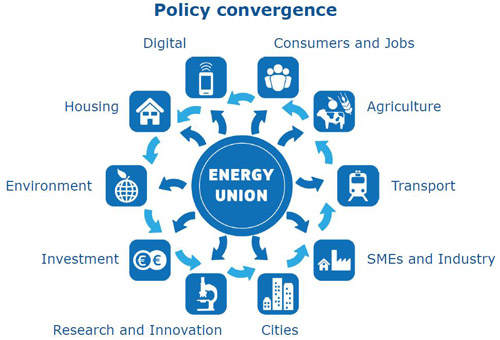 Interrelatedness, interdependence and the networking of everything have become a staple of current thinking, from social theories to technologists. Catrinus Jepma, speaking at a recent Edinburgh conference on energy systems integration, summarised this attitude well: national energy markets, electricity networks, different energy carriers or different sides of the same infrastructure (such as markets and networks) could all possibly be more integrated in the future.

Perhaps a fascination with networking also lies behind the Energy Union. Yet, an important question remains, visible almost daily in the EU. As apparent conflicts and national splits loom large across Europe, from energy issues and the single currency to bank rescues and migration, why launch a common European Energy Union now?

The announcement of the Energy Union has been followed by an impressive number of timely academic contributions on the subject. For example, the Deconstructing the European Energy Union workshop was held just one day after the proposal was presented to the European Council in March.

There are a number of reasons why the Energy Union has been embraced by European leaders. The workshop and other sources suggest the first reason: the substance behind the proposed Union is not exactly new.

In his remarks and paper for UK Energy Research Centre (UKERC), Joseph Dutton draws out the Union’s main similarities with previous initiatives. These themes include the EU’s long-standing tension between Member States’ and common energy policies, counter-reactions to unanticipated disruptions such as gas shortages and integrating energy markets whilst harmonising energy laws and regulations across Europe.

The Energy Union might be so appealing precisely because it continues policies that have yet to be fully realised. In particular, the EU’s Internal Markets for Electricity and Gas, which were legislated for in the 1990s, 2003 and 2009, are still works in progress. These continuities offer insights into the basis for Energy Union and more historical case studies are welcome for building a social theory of its origins and purpose.

On the other hand, with its history in mind, one might wonder what is specifically new about the Energy Union – as Dutton also observes. There are a number of places to start in order to address this question.

One is an early public discussion about the Union – in particular, in a Financial Times article in 2014 by Donald Tusk, the current President of the European Council and the then Prime Minister of Poland. Tusk’s influential proposal for an energy union – compared to the European Coal and Steel Community, itself the origins of the EU – was, in practice, a European strategy for security of supply for gas.

His proposal involved, among other things, an increase in solidarity among Member States during energy disruptions and joint EU purchasing of gas from Russia. Only some of these policies are included in the Energy Union, which trends lightly on the subject of joint gas purchases. Nevertheless, the ethos of the Energy Union is imbued with Tusk’s contribution to the debate.

A panel discussion on Scotland, the UK and the Energy Union in Aberdeen this May underscored this point. Ian Duncan MEP saw the Energy Union as an opportunity to develop a North Sea electricity grid for Scotland. However, he expressed the view that the Union will become preoccupied with energy security and keeping the lights on, particularly in the Eastern European Member States.

Lang Banks, Director of WWF Scotland, supported the principles of co-operation in energy and climate policy, but criticised the Energy Union precisely on these counts. He noted that, instead of national targets for renewables and energy efficiency, the strategy emphasises the EU’s Emissions Trading Scheme, which many already consider ineffective.

This discussion highlighted the fact that the appeal of an Energy Union – and its overarching nature – could be a cause for concern for some. For Duncan, the Union is a collection of everything the Member States could want in an energy policy. The problem lies in that, in so doing, it is unrealistically ambitious.

For Banks, gas supply diversification does not necessarily address how to reduce energy consumption. On the reverse, as Tusk underlined in his same article, not everyone equates decarbonisation with energy security – rather ‘in the EU’s eastern states … coal is synonymous with energy security’.

Severin Fischer and Oliver Geden find that the Energy Union is a symptom of the EU’s integration crisis, not its solution. A proposal that aims to connect everything but lacks the proper strategy for doing so may actually contribute to further fragmentation rather than overcome it.

The Juncker Commission’s State of the Energy Union report is a few months away and the European Parliament and EU Council will meet to discuss the proposals at the end of this year. Figure 2 shows the Commission’s timeline for the policy process and the next steps.

Acknowledgements
I would like to acknowledge the helpful comments received from Mark Winskel and Ronan Bolton.

Shortlink for this article: edin.ac/1LzwHNE

Dr Antti Silvast is Research Fellow in European Energy Policy and Markets at the University of Edinburgh. His current project, Scotland and the European Energy Union: A Sociotechnical Systems Perspective, funded through the Scottish ClimateXChange, analyses European energy policy developments and their implications for Scotland and the UK in terms of energy system transitions, including markets and trading, infrastructure and low-carbon investments. He works closely with Dr Mark Winskel and Dr Ronan Bolton and the University’s Energy and Society Research Group. Previously, he was postdoctoral researcher in Princeton University’s Princeton Institute for International and Regional Studies. His PhD in Sociology is from the University of Helsinki. He is also the co-author, with Joe Kaplinsky, of the White Paper on Security of European Electricity Distribution (2007) for UNDERSTAND, the pan-European training programme for electricity transmission security management.