While the EU continues to be divided on China, Switzerland has continued its longstanding privileged relationship with the country, writes Shichen Wang. He argues that China has favoured Switzerland’s long-term cooperation and absence of conflict, and that it uses the Swiss-Chinese relationship as a model for its relations with the rest of Europe. 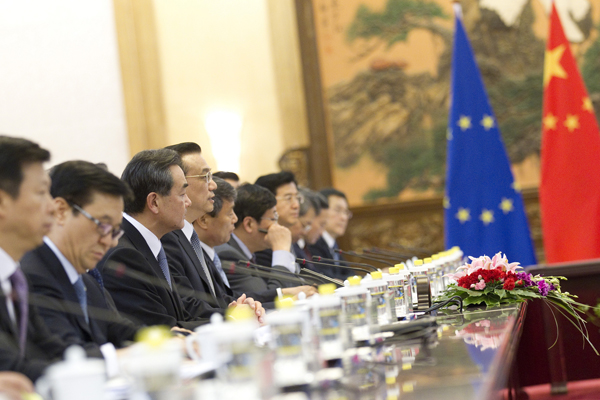 Swiss President Johann Schneider-Ammann recently paid a state visit to China from 7-9 April. His fruitful trip included not only meetings with Chinese President Xi Jinping and Premier Li Keqiang, but also new political language: ‘old friend’ for himself and ‘innovative strategic partner’ for his country.

During the talks, Xi called the Swiss president an ‘old friend of the Chinese people’ – an important and symbolic title in China’s political context. In addition, ‘China and Switzerland will establish an innovative strategic partnership to promote common development and prosperity’ according to the joint statement issued on 8 April.

Why is Schneider-Ammann an ‘old friend of the Chinese people’? And could Switzerland become the first country to have an ‘innovative strategic partnership’ with China? The reasons behind these developments lie in the history of the Switzerland-China relationship.

Not many people are called ‘old friends’ by Chinese officials. In order to receive such a title, foreigners must have made significant contributions to promoting bilateral relations and visited China several times.

The most renowned figure amongst China’s old friends is Dr Henry Kissinger, one of the key figures who paved the way for China-US relations in the 1970s. As an American diplomat and policy advisor, he has met all five generations of modern Chinese leaders, ranging from Mao to Xi, and still acts as a messenger between China and the US.

Schneider-Ammann, who was then the Economy Minister of the Swiss Federal Government, went to Beijing and signed a bilateral free trade agreement (FTA) with China in 2013, which came into force on 1 July 2014. The FTA between China and Switzerland is regarded by the Chinese as a milestone in the China-Switzerland bilateral relationship as well as China-Europe relations more broadly, since Switzerland was the first European country to sign an FTA with China (followed by Iceland).

Whereas the EU Member States are still arguing about whether or not to recognise China as a market economy, Switzerland has moved forward. Schneider-Ammann has been the central driver in upgrading bilateral economic and trade relations. China does not forget.

As a major actor on the international scene these days, China has many different kinds of ‘partnerships’ – more than one could remember. For example, Pakistan has an ‘all-weather partnership’, while the UK and the EU have ‘strategic partnerships.’

With Switzerland, China is creating a new variety: an ‘innovative strategic partnership.’ It is true that Switzerland has strong capacity for innovation. But how has Switzerland secured the prospect of such an advantageous arrangement with China? Once again, the history of the bilateral relationship helps.

Switzerland was one of the earliest western countries to establish diplomatic ties with the People’s Republic of China, or the New China, in 1950. Swiss company Schindler was one of the first western companies to set up a joint venture with China in early 1980s, echoing Deng Xiaoping’s Reform and Opening-Up Policy.

As well as supporting China’s accession to the World Trade Organisation, Switzerland was also among the first countries to acknowledge China as a market economy in 2007. The FTA was signed in 2013 to facilitate and increase trade relations, while benefiting Swiss businesses, which now have improved access to China’s substantial and growing goods and services sectors. When China launched the Asian Infrastructure Investment Bank (AIIB), Switzerland, again, was among the first countries to join as a founding member in 2015.

As Chinese Premier Li Keqiang stated: ‘China is willing to deepen cooperation with Switzerland in areas of trade, finance and innovation, and make bilateral cooperation a model in China-Europe relations’.

In fact, the UK took the lead among European countries to join China’s AIIB initiative. After Chancellor George Osborne vowed to make the UK China’s ‘best friend in Europe’, Germany and France sent their ambassadors in Beijing to meet high-level Chinese officials, eager to demonstrate their desire to be that best friend in Europe.

Belgium even received two pandas from China in 2014. Meanwhile, the EU hosted Xi at its headquarters in Brussels – the first time a Chinese president has visited in the past 40 years. In China’s foreign policy, its relations with the rest of Europe are modelled on its relationship with Switzerland.

Apart from the FTA and business links since the 1980s, what else has encouraged Switzerland-China relations to be a model from the Chinese perspective? The answer might surprise you: no conflict in their joint history – not just in the past 50 years, but in the past 170.

From the 1840s, China was invaded and colonised by the British, French, Germans, Americans, Spanish, Portuguese, Japanese, Italians and others. But Switzerland was never one of them. There was no war between China and Switzerland, owing to Switzerland’s position of neutrality. China views the next decade as a critical juncture in its ‘great rejuvenation,’ and an equal partner with a history of harmonious interaction is exactly what it wants.

China has a long history. And the Chinese have a good memory. When dealing in foreign affairs, they always say: ‘learn from the past, and then face the future.’ China’s leaders take their philosophy seriously. EU countries might learn something from Switzerland.

Shichen Wang is PhD Candidate in Political Science at the University of Geneva and Université Libre de Bruxelles. His research focuses on foreign policy decision-making, EU-China relations and European countries’ relations with China.