The recent EU court preliminary ruling on Scotland’s alcohol minimum pricing illustrates the conflict in EU law between upholding the integrity of the internal market and allowing measures designed to protect public health, writes Arianna Andreangeli. She explains that the case has rested on whether minimum pricing or taxation can better achieve the public health objectives while limiting market distortions, and that debate will continue as the case returns to the Scottish courts. 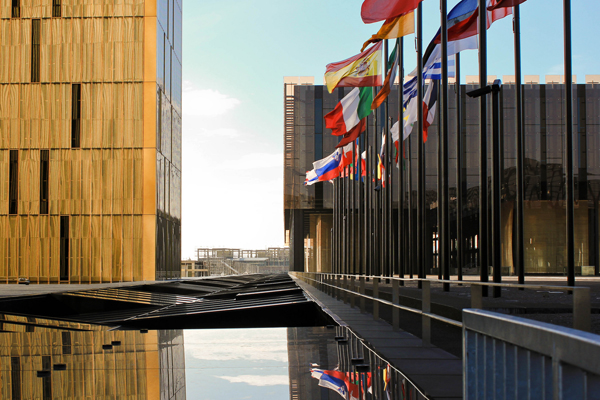 Outside the European Court of Justice, Katarina Dzurekova, CC-BY-2.0

The EU Court of Justice (CJEU) handed down its long-awaited judgement on the Alcohol (Minimum Pricing) (Scotland) Act 2012 on 23 December 2015. The case concerns whether the Minimum Price per Unit (MPU) system the legislation provides for the sale of alcohol is compatible with EU internal market rules. Implementation of the legislation has been suspended while proceedings continue at the Court of Session, which itself has been awaiting the preliminary reference ruling from the Court of Justice.

On the face of it, the CJEU seems to have taken the advice of Advocate General (AG) Yves Bot. One of the tenets of the case was the allegation that Scottish MPU would infringe the principles of the EU Single CMO Regulation on the sale of wine. The Court confirmed that this Regulation did not preclude Member States from adopting measures designed to pursue public interest goals – such as the objective of protecting human health – which restrict free movement principles and in particular the freedom to set wine prices.

Nonetheless, the Court held that such measures could only survive the scrutiny of internal market rules if it could be shown that they are proportionate to the objectives they pursue. In other words, does MPU not go beyond what is necessary to attain its beneficial goals, taking into account internal market requirements and the objectives of the CMO itself? (see Paras 13-29).

This issue is examined by the Court when considering the central question of whether the 2012 legislation complies with the requirements set out in Articles 34 and 36 of the Treaty on the Functioning of the European Union (TFEU).

In terms of the nature, in EU law, of rules such as Scottish MPU, the CJEU confirms the views of AG Bot and states that the legislation at issue, to the extent that it hinders the ability of traders to ‘reflect in the selling price to consumers’ any reductions resulting from lower costs for imported products, could hinder the free movement of goods within the internal market.

Consequently, MPU represents a measure having an equivalent effect to a quantitative restriction on trade in goods (MEQR) and can only be regarded as compliant with the TFEU if it also fulfils requirements of ‘appropriateness’ to the public interest objective it pursues and of ‘necessity’. The latter involves an assessment of its proportionality (see Paras 31-34).

As to the question of ‘appropriateness’, the European Court recognised first that MPU seeks to attain a twofold public interest goal – the reduction of ‘hazardous’ alcohol consumption among ‘vulnerable’ layers of society, as well as the improvement of the general health and wellbeing of the population.

It confirmed that these rules had been adopted in order to ‘combat the devastating effects of alcohol (…) in a consistent and systematic manner (…)’ (Para 39). Accordingly, it finds that it would not be unreasonable to regard the 2012 Act as an ‘appropriate’ means of achieving these objectives (see Paras 36-39).

The analysis is more extensive on the issue of ‘proportionality’. As AG Bot had suggested, the Court agreed that a generalised increase in indirect taxation is the ‘obvious candidate’ for a comparative analysis to evaluate proportionality. Indirect taxation was considered to be an equally ‘appropriate’ means of raising the price of alcoholic drinks, including for the purpose of improving public health.

The Court held that, at first look, indirect taxation appears to restrict the freedom of movement of the affected goods to a lesser extent than the imposition of minimum prices (see Para 46).

For the Court then, the decision on the lawfulness of MPU comes down to the analysis of MPU vis-à-vis fiscal measures such as indirect taxation. Consequently, the Scottish legislation can only ‘survive’ the application of internal market principles if it can be shown that the ‘less restrictive’ alternative is less effective as a tool for attaining the goals of the legislation – namely, the twofold goal of greater public health among vulnerable drinkers as well as among the general population.

Importantly, the Court emphasises that measures with ‘additional benefits’ – positive externalities going beyond the objectives pursued directly by the legislation – are not just a ‘bonus’, but these must be seen as grounds for ‘rejecting’ measures that do not seem capable of securing these benefits as well (Para 48).

In many ways, this outcome was not unexpected. When assessing the nature of MPU as an MEQR, just as the Advocate General had done, the Court relied on earlier decisions, such as those concerning previous national attempts at introducing similar minimum pricing rules in other markets.

It deployed this precedence to substantiate its argument that, in so far as MPU would ‘[prevent] the lower cost price being reflected in the selling price to the consumer’, it would hinder access to suppliers of cheaper options from other Member States to the Scottish market for alcoholic beverages (see eg Commission v France, Para 37).

It has been suggested by Angus MacCulloch that the Court of Justice may be ever more inclined to read ‘(…) the protection of price competition into the prohibition’ of measures having equivalent effect to a quantitative restriction.

However, this contrasts with earlier decisions where the Court had found a prima facie infringement of Article 34 on the grounds that domestic rules could adversely affect other expressions of competition, such as rivalry on trade volumes (eg Torfaen, Para 10). In other cases, the CJEU had also held that, while price competition was so fundamental that it could never be eliminated, it should not be regarded as the form of competition which should always be privileged over others (eg Metro v Commission, Para 6).

The ruling is also not unexpected, considering the pending proceedings in the national court. The CJEU has outsourced the appraisal of the proportionality of MPU vis-à-vis excise increases to the judges sitting in Edinburgh. In particular, they will be obliged to consider whether both measures can reduce hazardous alcohol consumption and increase the general health of the wider population.

Assessment of this is admittedly no easy task. It is an open question whether excise increases could have the same ‘displacing effect’ on demand for cheaper and more dangerous alcohol among more disadvantaged consumers as the imposition of minimum prices based on alcoholic strength (see eg the Sheffield Study on Alcohol Pricing).

In all, the continuing commitment shown by the Scottish First Minister to this legislation on the one hand, and the dogged determination of the Scotch Whisky Association to continue to fight its case in court on the other, signal that Scottish MPU will remain under the legal and political spotlight for some time to come.

For now though, the initial reaction to the judgement is one of slight perplexity. In particular, is the Court’s renewed emphasis on preserving ‘market access’ for cheaper goods, above any other consideration – including the fact that the measure may be ‘neutral’ if not beneficial to other forms of rivalry – justifiable in a market where equally important considerations of public interest play a considerable part?

More generally, it is worth emphasising that, as the CJEU itself acknowledged, Member States remain free to decide what degree of public health protection they wish to provide for their population. Subject to the limits set by the EU treaties (Para 35), they can adopt ‘consistent and systematic’ measures designed to achieve such objectives (Para 37).

Put in a different way, Member States remain ‘sovereign’ on matters of public health. Under the principle of subsidiarity, they are free to assess and determine the levels of public health that are appropriate for their population (eg Watts, Para 86, 92; Müller-Fauré, Para 102-103) and how to attain and maintain them.

Consequently, it is not unreasonable to think, as the CJEU seems to acknowledge, that Scottish Ministers, under devolution within the UK, are competent to adopt public health measures such as the MPU legislation.

However, here we return to the crunch question – whether an increase in indirect taxation can be regarded as less restrictive to free movement, and more in keeping with the functioning of the common market, than the imposition of minimum prices. If both measures achieve the same level of ‘health benefits’, then the one with the least restrictive impact on the freedom of movement of goods should theoretically prevail. With the CJEU judgement handed down, these are now questions for the Scottish courts.

Yet, one cannot help but wonder whether, in light of the evidence brought forward in support of MPU, an admittedly ‘modest’ increase in the price of cheap alcohol may not be a magic bullet to cure Scotland of its drinking problems, but surely an effective tool to balance the needs of competition and free movement of goods against the demands of a healthy population.