Although UK-wide referendums are not frequent, Scotland has more extensive experience with them, most recently in the independence debate, writes Peter Lynch. He argues that, while some of the same issues will feature in the EU referendum, the campaign is likely to be very different, with less grassroots engagement, greater emphasis on elites and less innovative outreach to potential voters. 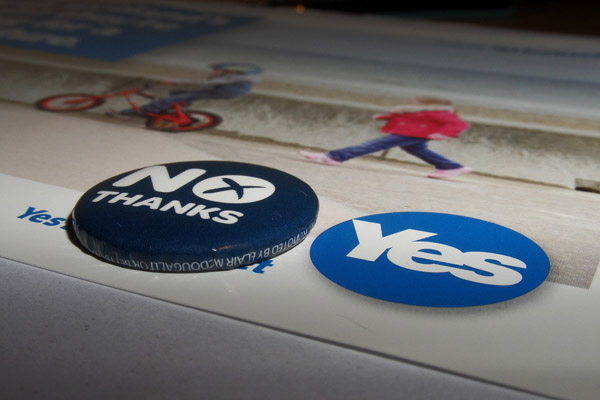 Scotland was probably the last thing on Nigel Farage’s mind when he spoke about the European referendum at the UKIP conference in Doncaster last week. Yet, the country has recent referendum experience of great value to campaigners and voters on the EU issue.

Farage used the conference to announce that UKIP would work with the Leave.eu group at the European Union referendum rather than campaign alone and divide the anti-EU side. Whether this actually happens and what role Farage has in the campaign is open to question. The party’s only MP, Douglas Carswell, pledged to work with Business for Britain, whilst Farage was fresh from launching UKIP’s own ‘Out’ campaign weeks before.

However, organisational unity is important as Electoral Commission referendum rules designate a leading campaign group for each side, which then determines spending limits and public funding. So someone has to be Yes and someone No in official terms, alongside all sorts of other campaigners who must declare for one side or another. This all sounds very familiar to Scottish ears.

What is UKIP’s role at the Euroref? Apparently, it is to provide foot soldiers in the shape of the party’s 47000 members. Whether this army of campaigners – as opposed to members – actually exists is another matter.

We can safely say that it doesn’t exist in Scotland: the land of UKIP lost deposits in 2015, where its leaflets were delivered not by activists, but by the Royal Mail. It is notoriously thin on the ground in Scotland, with its sole elected representative – MEP David Coburn – parachuted in from London for the 2014 European Parliament election, as the small Scottish party organisation had imploded.

Contrast the party’s 2015 electoral performance in Scotland to England – where it won votes, second places and councillors – and you can see the huge gap in UKIP performance between the two countries. There won’t be much of a ‘Leave’ campaign in Scotland coming from UKIP.

The dynamics of the EU referendum campaign are fascinating. Will the political left sign up for an EU of austerity and TTIP if David Cameron negotiates a deal against EU migrants? Will the political right favour the EU single market over sovereignty and weaker regulation? Will the established parties be enthusiastic campaigners at the Euroref or sit on their hands?

As in the Common Market Referendum in 1975, you can imagine leading figures from the Conservatives and Labour campaigning on both sides of the European question, but will there be genuine cross-party alliances in the campaign like Better Together in the Scotland referendum or individual party campaigns?

At present, we don’t know when the referendum will be held. All we do know is that it won’t coincide with the devolved elections in 2016 and must be held before 31 December 2017.

Currently, there are a variety of groups for Yes and for No – though the Electoral Commission’s decision to propose a leave/remain option on the ballot paper has altered campaign language and positioning.

On the ‘Remain’ side are groups such as the European Movement, Say Yes 2 Europe, British Influence, the main political parties, the CBI and so on. On the ‘Leave’ side are groups like the rebranded Leave.eu, Get Britain Out, No 2 EU (comprised of trade unionists opposed to the EU) and Business for Britain.

Aside from these organisations, politicians, businesses, lobbying groups and others are quietly working away on the referendum campaign in the background – just like they did in 1975. However, the point about these groups is that they are comprised of elites – the grassroots is pretty non-existent and it’s hard to see that changing.

From a Scottish perspective, the EU referendum will bring a severe sense of déjà vu – not least as EU issues were such a prominent part of the independence referendum. The Remain side of the Euroref will produce its own version of Project Fear, to forecast economic catastrophe if the UK leaves the EU. The Leave side will appeal to national identity, sovereignty and decision making closer to home.

Of course, it’s not as if referendums are unusual in the UK. Sure enough, there have only ever been two UK-wide referendums, but voters in Scotland are much more familiar with the referendum device and the dynamics of a campaign. Scotland has seen the longest ever referendum campaign, which resulted in a huge turnout and considerable voter engagement on the issues.

The referendum galvanised political activism and, post-referendum, the membership of the Yes parties surged. Arguably, the Euroref campaign isn’t going to be anything like the independence referendum as an experience and, importantly, one that engaged voters to deliver a record turnout of 84 per cent. The last Euroref had a turnout of 64.5 per cent and the AV referendum in 2011 – remember that? – only managed 41 per cent.

Cast your mind back to the independence referendum and think a little about the style of campaigning. Sure enough, there was a campaign conducted through the media and social media, with marketing messages and celebrities, but there was also an extensive grassroots campaign, especially on the Yes side. It’s hard to see this being replicated at the Euroref. Put simply, who on earth is going to do this for a remote, elite-driven and imperfect European Union?

From 2012-2014, Yes groups like Radical Independence were active in doorstep canvassing in Scotland’s working class housing estates. Women for Independence sought to engage women voters to ensure their voices were heard in the debate. Yes groups were heavily involved in voter registration to find and register the ‘missing million’ in many of Scotland’s most disadvantaged communities.

Can you imagine any of these activities being replicated in pursuit of a Yes or No at the Euroref? No, it is likely to be a referendum with no grassroots and community involvement that fails to engage with voters outside of the media – despite its importance.