The current stalemate in Spain over forming a government following elections last December is a function of the country’s shift away from a two-party system at national level, writes Paul Kennedy. He argues that, although polls suggest that new elections would yield a similar result, how leaders have approached the negotiations could impact public perceptions of their parties ahead of a revote. 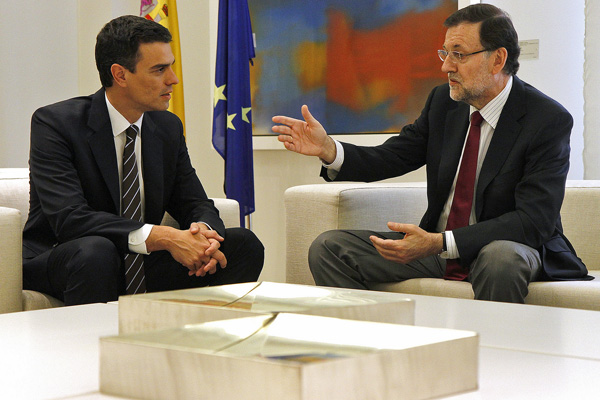 The lack of progress made between the four major Spanish political parties, the centre-right Popular Party (PP), the socialist PSOE, the centrist Ciudadanos and the anti-austerity Podemos, in negotiations aimed at forming a stable government following the general election held on 20 December 2015 has been such that 76 per cent of Spanish citizens view another general election as being inevitable, according to a poll published in El País on 3 April.

Moreover, the same poll indicates that, should voters return to the polls on 26 June, the result is likely to be much the same as it was in December, with the PP obtaining the largest percentage of the vote, followed by the PSOE. The only major change is that the electorate appears to be unimpressed by Podemos’s unwillingness to strike a deal in negotiations, relegating Pablo Iglesias’s party to fourth place behind Albert Rivera’s Ciudadanos, whose efforts aimed at reaching a deal with the PSOE appear to have been welcomed by the electorate.

With all parties concerned that any foot-dragging in negotiations might be punished by voters, negotiations will nevertheless continue right up until the deadline of 2 May. Given the apparently monolithic nature of Spain’s two-party system until the December 2015 general election, it is perhaps not surprising that politicians have shown such an inability to give-and-take as required in genuine political negotiations aimed at producing a stable government.

One has to go back four decades to the transition to democracy, which followed Franco’s death in 1975, to find a model of the degree of compromise required to move forward within the context of a political system made up of fiercely opposed ideologies. Disparaged today by Podemos as ‘the 1978 Regime’ (the Spanish Constitution entered into force in 1978), the system then put in place compares favourably with the current set of politicians’ abject failure to grasp the importance of conceding  as well as seeking advantage in any set of negotiations.

All the major parties nevertheless have good reason to feel insecure in the current political situation. Mariano Rajoy’s decision to reject any option other than a PP-led government – in receipt of the support of the PSOE and Ciudadanos – has effectively sidelined the PP from the entire negotiating process. With the PP still badly tainted by corruption allegations which have deterred Ciudadanos from offering its support, Rajoy remains in a difficult position.

To date, he has refused to stand down and his party is organised in such a way as to prevent outright leadership challenges. Rajoy is nevertheless entitled to remind voters that his party received the largest percentage of votes in December and is likely to do the same should Spain return to the polls in June.

For Pedro Sánchez’s PSOE, the challenges ahead are similarly significant. Despite the party being at the heart of efforts to form a government, culminating in the failed investiture vote in March, it is worth recalling that the PSOE obtained its worst ever general election result in the post-Franco period in December. Whereas Sánchez may have gained kudos with the electorate by picking up the gauntlet of government-maker thrown down by Mariano Rajoy, he will only be able to secure his position within his own party by becoming prime minister, a prospect which has faded since the failed investiture vote.

Aware of Podemos’s challenge on his left flank, Sánchez understandably views any agreement with the PP as amounting to consigning the PSOE to a sorpasso at Pablo Iglesias’s hands. Although comparisons between the PSOE and the hapless Greek PASOK might be fanciful, the similarities may be too close for comfort for Sánchez. The most remarkable development since December’s general election has been the ease with which the PSOE has been able to negotiate a credible agreement with Ciudadanos.

Any PSOE-led government has nevertheless been effectively scuppered by the mutual antipathy between Podemos and Ciudadanos. Reaching a deal with Podemos carries its own risks: Pablo Iglesias’s scathing attack on the former PSOE premier, Felipe González, during the investiture debate proved that Podemos’s unpredictability may well prove to be a liability should any agreement be reached over the coming weeks.

Although Podemos has chosen not to resort to its anti-‘casta’ (anti-establishment) rhetoric over recent months, its leader evidently cannot resist reverting to old habits when the mood takes him. There are certainly major figures within the PSOE who might prefer fresh elections to governing with Pablo Iglesias. Despite her denials, the socialist President of the Andalusian region, Susana Díaz, may consider mounting a leadership bid should Sánchez fail to lead a minority administration. The recent postponement of the PSOE’s 39th Congress until later in the year has only served to place on hold manoeuvers which may lead to Sánchez’s replacement as PSOE leader.

Podemos are also painfully discovering that the realities of political action can be more challenging than the works of Laclau, Mouffe and other Gramscian followers might suggest. Over recent weeks, Pablo Iglesias has forced the resignation of Podemos’s Number 3, Sergio Pascual, who was in charge of the party’s organisation, openly accusing him of not being up to the job.

Given that Pascual was a close colleague of Iglesias’s lieutenant, Íñigo Errejón, Iglesias’s treatment of Pascual was viewed by some as being handled in an insensitive manner and the development may yet have consequences for the future. Iglesias’s response has been to parachute Pablo Echenique, hitherto notable for his criticism of the leadership’s heavy-handed ways, into the post.

As for Ciudadanos, it appears that the party which emerged from the December general election somewhat disappointed with its tally of 40 seats has reason to feel buoyed by subsequent developments. Statesmanlike and open to dialogue, Albert Rivera is the only party leader to have burnished his reputation over recent months.

Unable to countenance a deal with Podemos as long as that party remains in favour of holding a referendum in Catalonia on independence, it is difficult to envisage any rapprochement over the coming months. The danger for Rivera is that former PP voters who voted for Ciudadanos in December may be unwilling to do so a second time, given the party’s outright rejection of an agreement with the PP and its readiness to deal with the PSOE.