The SNP’s policy of pro-Europeanism is more a result of strategy than ideology favourable to European integration, writes Judith Sijstermans. Looking at manifestos, parliamentarians and their records, she suggests that the party’s pragmatic approach to the EU means that, if it is to succeed in persuading voters to back EU membership, it will need to develop a more convincing message. 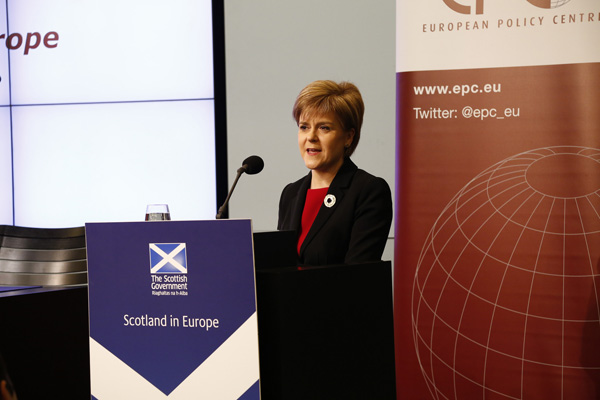 The SNP has claimed that it will be the most positive pro-European force in Scotland in the imminent EU referendum and has distanced itself from the cross-party Britain Stronger in Europe campaign. At face value, their claims are consistent with their values. The SNP has held a pro-European policy since the late 1980s and none of its sitting politicians have come out to support Britain’s exit from the EU (unlike the Labour or Conservative parties). While this policy stability may appear to be an asset, it is puzzling in light of the evolution of the European Union and party politics in the UK.

When the SNP’s seminal ‘Independence in Europe’ policy emerged in the early 1990s, the EU was instrumentally useful for nationalists. The developing Committee of the Regions and the establishment of Scotland Europa in Brussels provided opportunities for more power at the EU level. The 1980s were also a relatively hospitable time for the EU in mainstream parties. The British Labour leader Neil Kinnock was a strong proponent. Then Prime Minister Margaret Thatcher rallied behind the EU’s free market principles.

However, Europe did not prove to be as great an opportunity as some had hoped. Incoherent demands in Brussels hindered nationalist and regionalist lobbying efforts and national governments’ ‘gatekeeping’ powers led to only symbolic consultation of regional authorities in EU affairs. Years later, both British political support for the EU and the idea of a ‘Europe of the Regions’ have waned. The rise of the UK Independence Party (UKIP) is the most emblematic sign of growing Euroscepticism, but Labour leader Jeremy Corbyn’s ambiguous position on the EU highlights Euroscepticism on the right and left of British politics.

Pro-Europeanism as Strategy, Not Ideology

In terms of party competition, remaining pro-European in an increasingly Eurosceptic party system has allowed the SNP to distinguish itself from the rest of the British political mainstream. Pro-Europeanism means that the SNP has been able to critique the ‘growing determination to pursue isolationism and withdrawal’ within the Westminster parties. In contrast, pro-Europeanism was used to reinforce their point that Scottish nationalism is ‘peaceful, inclusive and civic’.

Internally, lack of dissent has been a strategic strength. As such, the party’s pro-European policy has been unchallenged by its members. The party’s NATO debate, portrayed by the media as ‘an internal rebellion,’ provided a cautionary tale on the dangers of internal dissent. Alex Salmond reminded the party of this, saying ‘I trust this conference to operate in the best interests of achieving independence for Scotland.’ The common goal of independence has kept EU policy as a consensual, secondary issue within the SNP.

Recent manifestos indicate that the SNP is less pro-European than leaders’ statements surrounding the EU referendum suggest. In 2015, the party’s headline EU policy was ‘opposing withdrawal from the European Union.’ This policy negates a negative position, rather than putting forward positive reasons to be part of the EU. The 2011 and the 2007 Scottish Parliament election manifestos embedded EU policies into sections on jobs, renewable energy and fisheries policy. The most recent positive manifesto policy on Europe can be found in the SNP’s 2003 manifesto, which claimed as one of its core objectives: ‘We will increase our links to Europe and the wider world.’

European policy has been dispersed through more technocratic policy areas. For example, Richard Lochhead has been put forth as an experienced, strong leader for the SNP at European level. However, his perspective on the EU is highly technical, due to his focus on the Common Agricultural Policy and the Common Fisheries Policy.

A review of the work done by SNP MEP Ian Hudghton shows a predominant focus on these same issues. SNP MEP Alyn Smith’s work is more diverse, but also tends to focus on international affairs and environmental issues. Notably, neither spends much time discussing the nature or benefits of the EU. Since the end of ‘Independence in Europe,’ SNP policymaking on Europe has focused on pragmatic day-to-day management of EU affairs.

The Pro-EU Status Quo and the EU Referendum

To some extent, just the SNP’s claim of positivity towards the EU might be enough to cue a largely SNP-friendly public to vote to remain. Johan Hellstrom’s 2008 study suggested that voters’ lack of knowledge about the EU allowed them to be ‘cued’ by parties. As the EU referendum campaign informs voters, the SNP may need to do more than simply cue European positivity in order to influence the electorate. Their new focus on connecting a second independence referendum with the EU referendum may appeal to their base of strong nationalist supporters, but non-nationalist voters may require more convincing.

Understanding this, Deputy First Minister John Swinney has argued that ‘We need a really strong, positive message as to why Scotland should remain in the EU and, given the political leadership that the SNP exercises in Scotland today, that’s a very natural role for the Scottish National Party.’ However, tapping into the ‘strong, positive message’ might not be as simple for the SNP as Swinney suggests.

For at least the last decade, the party’s stance on Europe has been driven by internal and strategic reasoning rather than true ideological positivity about the EU. As such, despite the intention of the SNP leadership to run a positive campaign, the party’s track record on EU policy hasn’t proven to be that different from the cynical approach they attribute to their competitors.