One of the main arguments in favour of withdrawal from the European Union centres on the return of sovereignty to the UK and, by extension, to Scotland, writes Drew Scott. He argues, however, that Scotland would be unlikely to see increased powers following an exit, due to limitations in order to access the Single Market, and that it would lose its existing influence in the EU. 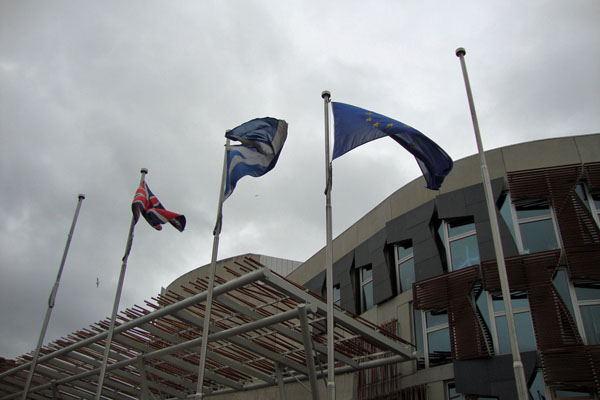 In EU parlance, Scotland is defined as a ‘region’ and, more specifically, as one of the EU’s ‘legislative regions’, a regional tier of government that has the power to enact laws over a range of policies within its jurisdiction.

Devolution was intended to enable the Scottish Parliament to design policies better suited to the needs of Scotland’s economy and society than those emanating from Westminster. However, in practice this was, and remains, subject to compliance with EU law.

A significant part of the Brexit debate at a UK level has revolved around the issue of sovereignty. There is also a ‘sovereignty’ dimension to the debate in Scotland. If the UK was to leave the EU then, just as a greater degree of formal constitutional sovereignty would return to Westminster, so too would greater ‘sovereignty’ in the form of increased powers over devolved matters flow to the Scottish Parliament.

At a time when the electorate is seeking greater accountability and responsiveness from its politicians, the idea of power being exercised closer to the citizen has considerable appeal. Therefore, a claim that Brexit will end the obligation for UK and Scottish citizens to adhere to EU law and restore the sovereignty of the national or ‘regional’ (in the case of Scotland) parliament is a powerful one that deserves the closest scrutiny.

In the wake of devolution, the UK Government agreed to establish procedures to ensure that the interests of each of the devolved administrations would be taken into account, when it formulated its position on EU legislation relating to devolved policy areas. These procedures were formalised in an overarching intergovernmental Memorandum of Understanding and a range of policy-specific concordats.

At the same time, the Scottish Parliament established the European and External Relations Committee, whose remit includes scrutiny of EU legislative proposals that impact on devolved issues. While that committee mimicked some of the work of the House of Commons European Scrutiny Committee, it lacks the power of ‘scrutiny reserve’ that theoretically prevents the UK Government from promoting a position in Brussels until the committee has reached a view on the matter.

Under the evolving EU ‘principle of subsidiarity’, strengthened by David Cameron’s renegotiation, domestic parliaments (including the Scottish Parliament) have a power to require the European Commission to review EU legislative proposals where these parliaments consider EU law to be unnecessary to achieve the aims being sought.

However, if the UK remains within the EU, it is unlikely that the role ‘regions’ play in EU processes will change significantly, as there is no appetite to create a more powerful regional level of governance. The ‘voice’ such regions have in EU governance will continue to depend largely on their influence over their national governments.

A key proposition of the Leave campaign is that Brexit will lead to greater powers being assigned to the Scottish Parliament, thereby increasing its capacity to enact laws better suited than those of the EU to the needs of Scotland’s economy and society.

If the obligation to adhere to EU law is removed upon Brexit (and that is the key ‘if’), the Scottish Parliament would no longer be restricted by EU law in formulating and enacting domestic laws where it had competence so to do.

While not necessarily contesting that a consequence of Brexit would be to increase the scope of devolved powers, many in the Remain camp argue that the likely terms of a future deal between a UK outside the EU and its remaining Member States would mean these powers could not be exercised. If the UK is to retain access to the EU Single Market, they contend, the UK (including the devolved administrations) must continue to adhere to the laws and policies governing that market.

Assuming that the UK Government would seek to secure a post-Brexit deal that guaranteed access to the Single Market on terms identical to those at present, the evidence suggests that policy ‘gains’ from Brexit to Scotland would be largely illusory. Similar deals for other non-EU states involve a combination of adherence to EU law and per capita contributions to the EU budget not significantly different from those required of the UK at present.

In that scenario, a loss of influence over EU policies would also be experienced in Scotland with regard to distinctively Scottish issues. While one may criticise the existing channels through which Scottish Government stakeholders influence EU policies, both via the UK Government and directly in Brussels, both channels do exist and may be accessed effectively.

It seems likely, therefore, that Brexit would be unlikely to significantly change the legislative parameters within which the Scottish Parliament operates over a range of policy areas – assuming the UK sought unfettered access to the EU Single Market. The principal exceptions to this general comment are agricultural policy and fisheries policy. In both cases, however, new challenges would emerge, the outcome of which is uncertain. Moreover, that influence exercised by Scotland over EU laws and policies would effectively cease to exist.

Prof Drew Scott FAcSS is Co-Director of the Edinburgh Europa Institute and Professor of European Union Studies at the University of Edinburgh. An economist by training, he specialises in European economic integration, including subsidiarity, Economic and Monetary Union and cohesion.