While the EU is often perceived as an organisation which functions on the consensus of its Member States, the Greek situation has shown that it can also instruct a Member State more directly, writes Jeremy Richardson. He argues that this trend towards greater policy imposition by the EU will only increase going forward, with implications both for the EU countries in the Eurozone and those outside it. 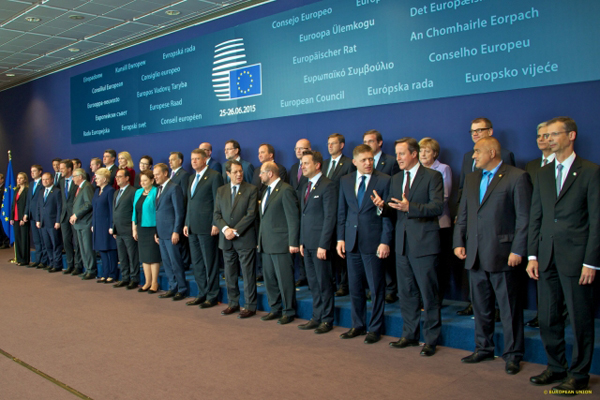 The recent violent clashes we have seen in Greece, in protest against the bailout terms drafted at the Euro Summit on 12 July, are an inevitable reaction to what can only be described as an impositional and dirigiste style of EU government (the fashionable term governance seems quite inappropriate in this case).

Some key aspects of the bailout conditions are pension reform; market reforms, including Sunday trading, sales periods and pharmacy ownership; privatisation of electricity transmission; reform of collective bargaining; broadening the tax base; overhaul of the civil justice system; and introduction of semi-autonomous spending cuts in case of deviations from primary budget surplus targets.

Moreover, the agreement states that ‘the [Greek] government needs to consult and agree with the [EU] Institutions on all draft legislation in relevant areas with adequate time before submitting it for public consultation’ (emphasis added). This dirigiste approach does not end there, however. The oft-noted weakness of the EU in the crucial area of policy implementation seems not to extend to the Greek bailout. The independent fund which will be set up to receive the proceeds from asset sales, although managed by the Greek authorities, will be run ‘under the supervision of the relevant European Institutions’.

Even the programme to modernise and strengthen the Greek administration will be put in place ‘under the auspices of the European Commission’. To be sure, it might be argued that such dirigisme has been seen before in pre-accession terms laid down for candidate countries, but it is probably unique in its scope and tone for existing Member States.

I dwell on the Greek case because it seems to me a perfect illustration of just how far the transfer of power from Member States to the EU has gone. I have long argued that the EU has over time acquired for itself most of the features of Western democratic states, apart from (what I regard as a somewhat outdated feature of modern states) the monopoly of the legitimate use of violence.

Above all, it has acquired for itself, in very many policy areas, the central function of a modern state – the power to decide a vast range public policies that were hitherto the province of Member States. In that sense, the EU has acquired quite a high degree of sovereignty (and, as we see in the Greek case, extreme coercive power, if not the right to use physical force). By so doing, the EU has begun to look very state-like or, as I argue, has emerged as a policy-making state.

Few policy areas seem to escape at least some form of ‘Europeanisation’ – not in the commonly accepted sense of ‘Europeanisation’, namely adaptation to EU ‘laws’ at Member State level (what I term ‘Euro-adaption’) – but the shift in the locus of public policy-making power to the EU level. Thus, by Europeanisation I mean ‘the processes by which the key decisions about public policies are gradually transferred to the European level (or for new policy areas, emerge at the European level)’.

One of the most interesting aspects of the Greek bailout case, however, is that the policy style adopted by the EU was unusual. Governments can and do effect shifts in policy style, the Thatcher Governments being a notable example. However, most of us have up to now seen the EU as an almost classic example of a bargaining policy style, emphasising the incorporation of interests in a process of promiscuous consensus building, often concerned with incremental, rather than radical, policy change.

To be sure, the Greek bailout case does not need to cause us to abandon that characterisation of the EU policy process. The style has seemed to be embedded, although it might have been more correct to talk of multiple policy styles in the EU. Whilst policy formulation has generally been consensual and participatory, the outcome has often been the growth of EU regulation. Thus, even within the velvet glove of ‘new governance’ in the EU one can detect a mailed fist!

The Greek case might be quite worrying as a portent of just how far the EU could develop as a policy-making state. Membership of the Monetary Union means that those Member States which have joined face some special decision rules that do not apply to those which have not. Monetary Union can be argued to be the most advanced case of ‘Europeanisation’ so far (in the sense I define it).

However, whilst the Greek case might be unusual, we might well see more cases of EU dirigisme, at least in the future management of the Eurozone. In a forthcoming article in the Journal of European Public Policy, ‘Monetary Disunion: The Domestic Politics of Euroland’, Wolfgang Streeck and Lea Elsässer argue that the imbalances between the rich and poor countries in ‘Euroland’ will mean that ‘…two goods will be traded between the centre and the periphery of the Union: financial support given by the former to the latter, and political control conceded in return by the latter to the former’.

It would be wrong, however, to see the dangers of a more dirigiste EU as of concern to only Eurozone members (particularly those whose economies have structural weaknesses). Elsewhere, I have argued that we have seen an onward march of Europeanisation which is not destined to be halted any day soon. There are tectonic forces within the EU that drive the Europeanisation process onwards.

The Greek case shows that, under certain circumstances, the EU can shift its policy-making style from consensual bargaining to dirigiste imposition. In short, the EU can bite!