The Common Travel Area (CTA) between the United Kingdom and the Republic of Ireland dates back to Irish independence in 1922, when no alterations were made to the border arrangements as they then stood. Under British law, the ‘Free State’ of Ireland was classed as a British dominion, meaning that Irish nationals were still formally classified as British subjects. Following the 1948 British Nationality Act, those born in Ireland ceased to be British subjects, however, they were still treated as a special case – British law still applied to them in the same way as it did to British nationals. A year later, the 1949 Ireland Act declared that whilst Ireland was no longer a UK dominion, it was nonetheless not a ‘foreign country’. As such, the origins of the CTA were essentially the pragmatic need to maintain the concrete status and rights of Irish nationals in the UK. As British Prime Minister Clement Attlee stated, it would an “extremely difficult thing to decide” the precise status of anyone with an Irish name, as well as a “great expenditure of men and money and a great extension of control of aliens”. 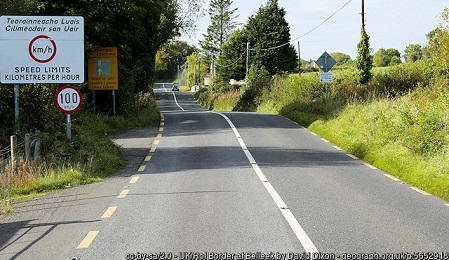 The CTA was formally agreed in 1952, with the Irish government agreeing to adopt a similar immigration policy to that of the UK. This shared immigration policy is a key aspect of the CTA – generally speaking the CTA has influenced Irish immigration policy vis-à-vis third countries, with little evidence of the UK adapting its immigration policy in line with Ireland. The CTA obviously predates the accession of both countries to the European Union, and has gradually been incorporated into the Treaties. During negotiations for the Treaty of Amsterdam, the UK made the decision not to join the Schengen area and Ireland also declined so as to preserve its special relationship with the UK, including the CTA. Now Protocol 20 TFEU explicitly states that the UK is entitled to exercise border controls and that “the UK (and Ireland) may continue to make arrangements between themselves relating to the movement of persons between their territories (the CTA) … so long as they maintain such arrangements the provisions (of this Protocol) shall apply to Ireland under the same terms and conditions as for the UK”.

The Status and Rights associated with the CTA

The CTA establishes – in principle – passport-free travel for nationals of the two states, although in practice all air and sea carriers require passengers to show some kind of photo-identification that proves nationality. The Irish border is a notable exception, as mandatory control checks are not imposed. Instead, any decision to check the identification of someone travelling crossing the border is “typically informed by risk assessment of the route and passengers”. This means that at least with respect to entry rights, there is currently little difference between Irish/British nationals and EEA nationals more generally.

The CTA and Brexit

All parties involved in the Brexit negotiations (the UK, the Republic of Ireland, and the European Union) have indicated a firm desire to maintain the CTA post-Brexit. The UK Government has explicitly stated that maintaining the CTA is a negotiating objective. That being said, Former Brexit Secretary David Davis when pressed was unable to give a specific guarantee that the existing rights of Irish nationals would be maintained. As such, it is suggested that the language of the CTA could be maintained, whilst hollowing its actual value. Ireland also views the maintenance of the CTA in its current form as a priority. However, this commitment is qualified by the caveat that the application of the CTA must be in conformity with EU law.

The CTA is a relatively uncontentious aspect of the Brexit negotiations. Article 2(1) Chapter II of the current Draft Agreement explicitly states that the “UK and Ireland may continue to make arrangements between themselves relating to the movement of persons between their territories while fully respecting the rights of natural persons conferred by EU law”. Article 2(2) obliges the UK to ensure that the CTA and associated rights “can continue to operate without affecting the obligations of Ireland under Union law, in particular with respect to free movement for Union citizens and their family members”. Article 34(2) Title IV provides that the provisions on equal treatment “shall be without prejudice to the Common Travel Area arrangements between the UK and Ireland as regards more favourable treatment which may result from these arrangements of the persons concerned”. Both provisions are coloured in green, indicating that they are already agreed “at the negotiators’ level”.

The problems associated with Brexit for the functioning of the CTA obviously depend a lot on what is finally agreed between the UK and the EU. Under the current terms of the Withdrawal Agreement, at least during the transition phase, it seems very likely that the CTA will continue to function the same as it does now. Even beyond this, should the UK opt for EEA membership (or a ‘Norway -’ relationship), this would presumably require the maintenance of the system of rights and protections for Irish and EEA nationals that is currently in place, or with very minor changes that would not affect Ireland’s obligations under EU law. Having said that, it is also suggested that the rights and protections available under the CTA are not as entrenched as is commonly assumed, and that Brexit may prompt a re-evaluation of the special status of Irish nationals in UK law. However, more questions would arise should the UK’s future trading arrangement with the European Union be more akin to a Canada (+++) style deal. Indeed, Theresa May’s current proposals are based on a high degree of regulatory flexibility in the area of the free movement of persons, which the UK government is still committed to ending.

Under future UK immigration plans, anyone not “highly-skilled” (suggested to be anyone earning less than £30,000 per annum) will not be entitled (automatically at least) a work visa, with an exception for seasonal jobs in the agricultural sector. It is still not quite clear how the UK labour market (or public services) will continue to function under such stringent rules, in light of the UK’s reliance on low-wage jobs and the fact that such a high threshold will exclude a vast array of highly qualified and highly trained migrants from crucial gaps in the labour market. This is likely to result in more irregular migration and employment (and probably a system of semi-legal employment status) as well as a dual system whereby Irish nationals would still have unfettered access to the British labour market (and associated rights and protections), whilst most other EEA nationals would barred from working in lower-skilled positions, or allowed to work under a semi-legal basis but deprived of all associated rights and protections, something which would likely prove to be unpalatable for the European Union. Finally, whilst there is nothing stopping an EU member State from giving effect to bilateral agreements that grant higher rights to persons from a non-EU country, there is currently no EU Member State that offers nationals from outside the EU a better status that EU nationals have.

On the face of it, the CTA should make little difference to Northern Ireland, at least in terms of the rights and status of Irish and British nationals on both sides of the border. However, there is a real question over whether the Irish border can continue to be ‘soft’ and if the CTA can be maintained without border checks. House of Lords EU Committee evidence suggests that Brexit poses “a real and substantive threat to the very existence of the CTA”, including the reintroduction of passport controls to prevent the land border being used as a back door into the UK. With divergent immigration regimes, the situation would occur whereby EEA nationals could enter Northern Ireland freely and would then be able to access other parts of the UK without checks. It is suggested the UK Government is largely unconcerned by such a situation as ‘border checks’ could be performed at ports and airports in other parts of the UK. This may be controversial with the Democratic Unionist Party (DUP), which is willing to vote down a Brexit deal that imposes a border in the Irish sea. However, given that this would effectively constitute a more formalised replication of the current rules, reconciliation between the DUP and UK Government is certainly not impossible.

It should be emphasised that this situation is unprecedented – no other external EU border comes without any kind of physical border controls. For example, the Faroe Islands declined to join the Schengen zone at the same time as the other countries of the Nordic Passport Union (NPU). The result has been that travellers from the Faroe Islands are checked when entering the other Scandinavian states, while travellers from the NPU can travel to Faroe Islands without controls. There is also the comparison with the border between Norway and Sweden, however, this is not particularly appropriate given that both countries are inside the Schengen area.

Finally, there is the question of what would happens should the UK crash out of the EU without a deal in March 2019. In this situation, The Withdrawal Agreement will not be agreed upon and the Treaties will no longer apply, thereby meaning that there is no formal position form the European Union as regards the maintenance of the CTA. That being said, at least initially, nothing would stop the CTA being enforced as it is currently, at least in the UK. In the longer-term, whilst the UK would likely treat Irish nationals as being British under UK law, it is uncertain whether Ireland – as an EU member state – would be able to offer such preferential treatment to nationals of a country fully outside the European Union (and the ‘European model’).

Daniel Carter is a PhD candidate at Leiden University. He joined the Leiden Europa Institute in 2015 as the Academic Coordinator for the Advanced LLM in European and International Business Law. He is also part of the European Law Moot Court coaching team at Leiden Law School.