Interest groups follow power to its source and, with the progressive transfer of policy-making from national to European level, the network of interest groups in Brussels has intensified over time, writes Jeremy Richardson. He argues that their lobbying has eroded the ability of national governments to set policy agendas and that many interest groups, now embedded in EU policy-making, have a vested interest in seeing European integration continue apace. 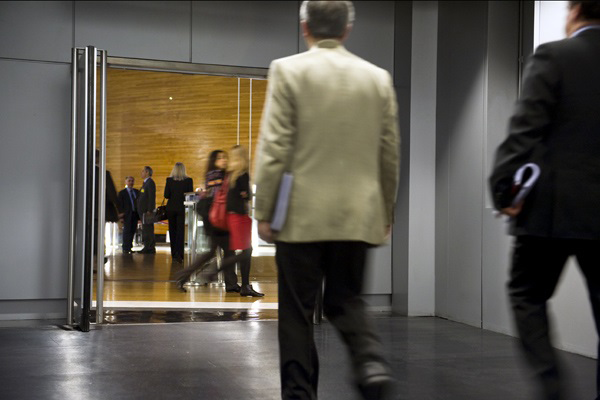 Gathering to the Hemicycle for the Opening of the Session, European Parliament, CC-BY-NC-ND-2.0

Lobbying, if not the oldest profession, has ancient origins. It is a natural political phenomenon. All systems, even totalitarian regimes, exhibit the phenomenon to some degree. Developed democracies all have very highly developed lobbying systems. Indeed, providing opportunities for lobbying is one of the hallmarks of a democracy.

To be sure, there are debates about biases in lobbying systems, most notably that those interests with the most resources exploit the system to the disadvantage of those organised interests less well resourced, or not even organised at all. However, the EU lobbying system is now so dense, and opportunity structures so diverse, that it is unlikely that there is a consistent bias in the sense that one set of interests (such as business) always wins.

No single actor can control a game with so many different players, or deliver the desired payoff. Different sets of actors have different attributes. For example, environmental groups seem adept at agenda-setting in the EU, whereas business groups are more adept in the detailed technical processing phase of policy-making. Thus, ‘win a few, lose a few’ is probably the motto hanging above the entrance of every lobby organisation in Brussels.

One certainty is that once the European Union came into existence, the emergence of an EU lobbying system was inevitable. Groups understand what is probably the first rule of lobbying, namely that it is best to shoot where the ducks are! As always, shifts in power are noted and acted upon by interest groups, which serve as a type of weathervane for the locus of political power in society.

Interest groups quickly re-target their lobbying activities, once they realise that power to take decisions which affect them has moved to a new institution or to new actors. Whatever one’s views about the degree of ‘stateness’ that the EU exhibits, some fundamental shifts in the relationship between the EU and the Member States have taken place.

The changes in the distribution of power within the EU have prompted a proliferation of interest group lobbying at the European level. The more powerful European-level institutions have become, and the more that public policy has come to be decided at the European level, then groups increasingly shift at least some of their activity (and resources) to that regional level.

Accordingly, even areas such as health policy exhibit at least some degree of EU influence as part of a system of creeping Europeanisation. It follows, therefore, that explaining the emergence and continued development of an EU lobbying system is not rocket science. Indeed, a very difficult research question would have arisen if the EU had not developed a vibrant and dense lobbying system.

Once the EU had achieved what is actually a massive shift in what was previously purely national policy-making to the European level, groups, unless they were entirely inept, were bound to become ever more active at the new locus of policy-making power. If the lobbying dog had not barked, that would have been unique in a developed political system.

Our central thesis is that once the EU began to develop into a significant venue or arena for public policy-making in Europe, a certain trajectory of institutionalised interaction between the EU and interest groups was likely. We base this prediction on three theoretical assumptions.

First, bureaucracies have a tendency to construct stable and manageable relationships with interest groups in each policy domain as a means of securing some kind of ‘negotiated order’ or stable environment.

Second, interest groups generally exhibit a preference for state bureaucracies as a venue for informing themselves about and influencing public policy.

Third, interest groups will seek to exploit new opportunity structures or venues as a means of maximising their capacity to shape public policy to their own advantage.

We suggest that different types of actors have associated behavioural patterns – or at least exhibit procedural ambitions which condition and structure their behaviour in the real world. Moreover, as many of these procedural ambitions are deeply embedded in the political cultures of the majority of the Member States, it should be no surprise to see the gradual emergence of a ‘European policy style’ emphasising group intermediation in the policy formulation stage.

At the heart of this process is, of course, the European Commission. Since its formation, the Commission has behaved as all western bureaucracies behave, namely developing a process of ‘mutual exchange’ between itself and groups in an act of joint (professionalised) problem-solving. The result of many Commission initiatives in response to increased group mobilisation has produced an often symbiotic relationship (though rarely genuinely corporatist) between itself and the many thousands of interest groups now active in Brussels.

This is not to suggest that interest groups focus exclusively on the Commission. The steady increase of the powers of the European Parliament (EP) has been accompanied by an equally steady increase on both the range of groups and the amount of lobbying resources focused on the EP, based on the ‘shooting-where-the-ducks-are’ principle.

Similarly, the European Court of Justice (ECJ) has also attracted ‘lobbying’ via litigation strategies, such as by women’s advocacy networks. Moreover, we must not ignore the fact that Member States are still key players (the key players, many would argue) in the Brussels policy game. Thus, lobbying national governments, either directly at Member State level or via the Council of Ministers and its attendant committees, is still a central part of trying to influence the formulation of EU policy.

However, we argue that that the creation of a maturing system of interest group intermediation at the European level has both transformed national policy-making systems and fundamentally changed the roster of actors who constitute the power elites in Europe.

This transformation is due to the simple fact that the very involvement of interest groups in transnational settings, such as the EU, has contributed to a further reduction of national sovereignty, whether or not states (individually or collectively) wanted that. Member States have, for whatever reasons, ceded sovereignty over large areas of public policy-making to the EU level.

Groups have noted the shift in power to the European level, have acted on that knowledge, and by so doing have facilitated (and often encouraged) yet more transfer of national sovereignty to the EU. Interest groups have, therefore, been a central component in the engine of European integration.

The EU is incredibly open and permeable to interest group lobbying compared with even the most pluralistic Member States. The openness of the European Commission, European Parliament and European Court of Justice to interest groups weakens the ability of Member States to control and steer national interest groups and, indeed, to control their national policy agendas. Insofar as groups become ‘activists beyond borders’, they both weaken the power of states in the process of transnational governance and have become an independent source of European integration.

The fact that there are so many different venues for group lobbying means that the EU is an inherently disjointed policy process. Deals done at one institutional site can be undone at another. At best, therefore, we might see a process of serial institutionalisation of group intermediation in each EU venue, leaving problematic the ambition for joined-up governance in the European Union.

Whether the policy pay-offs from interest group participation in the EU policy process are high or low, we seem set to see more interest group participation at the EU level rather than less. Politicians may hold grand debates about the merits of European integration. Meanwhile, interest groups get plenty of Brussels mud on their boots. Those politicians who wish to see a reversal of the process of European integration might be in for a shock. Many groups (especially such as those focused on business, the environment and women, to name just a few) would mobilise to leave policy-making just where it is!

For further reading, see the author’s chapter with Sonia Mazey, ‘Shooting Where the Ducks Are: EU Lobbying and Institutionalised Promiscuity’, in their co-edited book: European Union. Power and Policy-Making: Fourth Edition (Routledge, 2015).