The UK’s EU renegotiation does not feature prominently in the media of East Central Europe, as the UK is no longer seen as a significant international actor, writes Jan Čulík. Drawing on interviews with officials and analysis of national reporting, he underlines that potential restrictions on welfare benefits for EU citizens remain a major concern for these countries in the renegotiation. 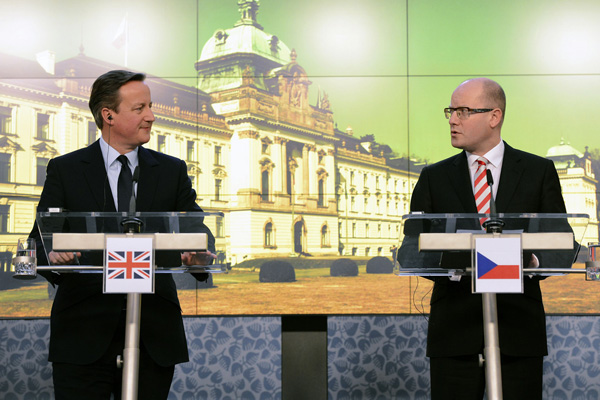 How are the East Central European countries reacting to David Cameron’s attempts to renegotiate the terms of the UK’s membership of the European Union? As is well known, the British Prime Minister has been primarily attempting to limit EU immigration to the United Kingdom, or at least – since it has proved well-nigh impossible to curtail the principle of the free movement of citizens across the EU – to limit UK welfare payments to them. Surely this would be of primary concern to the governments and citizens of the ‘new’ EU members in the East?

While most of the UK media is veritably obsessed with the issues connected with the possible exit of Great Britain from the European Union, it must be pointed out that the Brexit phenomenon is covered only marginally in the media of the Central and East European countries, and it is only a marginal part of the public debate there. Why is this so?

The prevailing perception in East Central Europe seems to be that, under David Cameron’s leadership, the United Kingdom has all but left the international stage. Cameron’s government does not seem to be participating in the efforts to tackle the major international issues of the day, whether it is the war in Ukraine, the financial crisis in Greece or the current refugee crisis.

Britain does not seem to be regarded as a major international player any longer – that role has been taken over by Germany and its Chancellor Angela Merkel. Thus UK concerns about the issues associated with Brexit are not really met with much interest in the East European media.

Following the most recent proposals for the UK’s new EU settlement tabled by European Council President Donald Tusk, the Foreign Ministries of the four Visegrad countries (Czech Republic, Slovakia, Hungary and Poland) were asked to comment on their governments’ reactions to the proposals.

‘Slovakia is interested in the UK staying in the EU, if all the existing EU principles are retained,’ says Slovak Foreign Minister Miroslav Lajčák. Slovakia also welcomes the fact that Cameron’s proposals do not require any changes to primary EU legislation (the treaties). It is aware that many formulations within the proposals are still very vague and much works remains to be done.

Slovakia perfectly agrees with the measures relating to European competitiveness. It understands that the UK wishes to retain a certain amount of its national sovereignty and to strengthen the role of national parliaments in the EU.

The Slovak Foreign Minister explained that: ‘We accept that if a critical mass of European parliaments wishes to stop proposed European legislation, this should happen. However, for Slovakia, the issue of social welfare benefits is the most sensitive. We understand that the UK does not want to allow its welfare system to be abused, but for us the red line beyond which we are not willing to go would be discrimination of Slovak citizens who work in the UK and thus contribute to the British economy.’

He emphasised that the contribution these Slovaks make to the UK economy ‘is substantially greater that the welfare benefits they may be receiving’. He added that, if anyone comes to Britain with the sole intention of abusing the welfare system, the UK government is of course fully entitled to take action against them.

The Czech response to the negotiations between Donald Tusk and David Cameron has been remarkably similar: ‘The Czech Foreign Ministry does not have any problems with Cameron’s basket A, dealing with economic and monetary issues, or with basket B, which proposes the strengthening of the competitiveness of the European Union.’

The Czech Republic does seem to have problems with Cameron’s Basket D, which deals with social welfare and the freedom of movement. The Ministry says: ‘For the Czech Republic, the retention of the principle of the free movement of persons is a priority. The Czech Republic may agree with some changes in this area if they fully conform to existing EU law.

‘The Czech Republic supports full adherence to and enforcement of EU law in the area of the free movement of persons, while supporting every measure aimed at preventing the abuse of these provisions. The Czech government sees it as desirable that these vital provisions should be developed and reaffirmed. The issue of social welfare benefits and of the indexation of child benefit is regarded by the Czech government as sensitive. There are fears that possible changes in this area might set a legal precedent in future.’

No response was received from the Polish and Hungarian governments to these questions, which – especially in the case of Poland – is relatively remarkable, considering that around one million Polish citizens currently work in the United Kingdom. In spite of that fact, just as in the other East Central European countries, the Polish media has not devoted much attention to the issue. Nevertheless, we have been able to gather together some information from the Polish media, particularly since the new Polish government has managed to create some controversy on the topic.

The controversy began when Witold Waszczykowski, the new Foreign Minister in the right-wing government formed by the Law and Justice Party after its victory in the general election in the autumn of 2015, said that he was ready to give up the welfare rights of Poles living in the UK if David Cameron supported the Polish demand that NATO should build new military bases in Poland. Quickly thereafter, a Polish government spokesperson explained in public that those two issues were absolutely unrelated and should not be considered together.

The issue of the renegotiation of the British terms of EU membership was briefly discussed by the leading Polish daily newspaper Gazeta wyborcza after David Cameron’s visit to Warsaw in early February.

It quoted Polish Prime Minister Beata Szydło as saying that, ‘Cameron will first negotiate with Poland and then with the rest of the European Union,’ following a meeting with him. This was because ‘Cameron wants to curtail social welfare payments for non-British EU citizens working in the UK and that concerns primarily immigrants from Central Europe, in particular the Poles,’ she added.

Gazeta wyborcza reported that the Polish government had no reaction to proposals tabled by Cameron during his visit. During a joint press conference in Warsaw, Cameron and Szydło simply read out their official statements and refused to answer journalists’ questions. They both stressed ‘the importance of the UK-Polish strategic relationship’.

Szydło added that the UK was ‘a country which forms the basis of the EU and it is extremely important for us that the UK remains an EU member’. Gazeta wyborcza mentions Donald Tusk’s latest proposal, which would give the United Kingdom the right to apply an ‘emergency brake’ if a wave of EU migrants ‘threatened to swamp it’.

‘There are now approximately one million Poles living and working in the UK. We would like them to enjoy the same conditions and the same chances for professional development as UK citizens,’ said Szydło, adding that any attempts to reduce social welfare payments to these Poles ‘might be difficult for a majority of the citizens of Poland to accept’. She reiterated that the principle of free movement of workers throughout the EU must be retained.

After the meeting with David Cameron, Jarosław Kaczyński, the head of the Law and Justice Party, said that ‘Poland has managed to secure full protection for all those Poles who are already in the UK’. Kaczyński added that Cameron had promised that Poles whose children are in Poland will continue to receive child benefits. He did not mention that the benefits may be reduced to match the level of payments available in Poland itself.

The Polish Minister for Europe, Konrad Szymański, said that Poland is now waiting for clarification on the nature of the UK ‘emergency brake’. The view is that this must not be used for a permanent suspension of benefits for EU workers. The Central European countries are also apparently working in Brussels to make sure that the emergency brake could be used only by the United Kingdom on its territory, and not by any other West European EU Member State.

Dr Jan Čulík is Senior Lecturer in Czech at the University of Glasgow and Founder of the Czech-language online daily Britské listy. His research interests include Czech literature and cinema and contemporary Czech media, society and politics.