The Erasmus programme of educational and cultural exchange has, over its three decades, brought significant benefits to Scotland and the UK, writes Colin Imrie. He argues that the prospect of the UK ending its participation, due to the free movement of people, would be a substantial loss for students, and that the proposed devolution of immigration could allow Scotland to keep its Erasmus links. 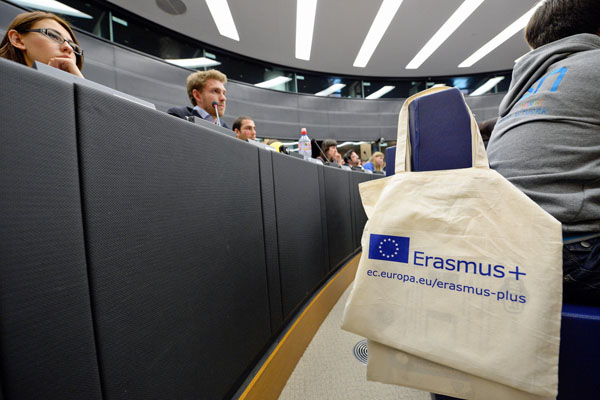 2017 marks the 30th anniversary of the launch of the Erasmus programme, which gives students opportunities to gain new experiences and broaden their horizons by going abroad. What started as a modest mobility scheme for higher education students back in 1987, with only 3200 students in its first year, has developed over the last 30 years into a flagship programme supporting almost 300000 higher education students per year to carry out part of their studies in other EU and associated countries.

In recent years, the programme, now termed Erasmus+, has become much broader, providing opportunities for study periods and traineeships/apprenticeships for both higher education and vocational education and training students, youth exchanges, volunteering and staff exchanges in all fields of education, training, youth and sport. Erasmus+ is also more open to people from disadvantaged backgrounds.

UK universities have made significant advances in delivering Erasmus programmes both home and abroad. Almost 600000 people from the UK have participated in the three decades since the programme began. Across the UK, more than 40000 people participated in 2015-2016. This includes studying, training, volunteering and gaining professional experience in other EU countries.

In 2015-2016, Scottish colleges and HEIs were awarded €7316361 in total and 1600 students from Scotland go to Europe on study and/or work exchange programmes every year through Erasmus. The Scottish Government sees participation in Erasmus+ as helping to raise the profile of Scotland as a place to live, work and study in key overseas markets and to showcase the best of Scottish higher education to the world.

As well as major programmes in universities, the Scottish Government also uses Erasmus to promote teacher exchanges in the context of its policy to promote foreign language teaching in primary schools, with some 250 teachers attending immersion courses in France and Spain in recent years.

On the equally important issue of youth vocational training, the Scottish Government has used available EU funding to look at how national and local government and delivery bodies support disadvantaged young people to enter the labour market, leading to the development of a pilot in Grange Academy in East Ayrshire, based on a successful Belgian programme which combines the school curriculum with workplace training.

There is no apparent sign, however, of any UK Government interest in building on this as the UK prepares to leave the EU. While the Prime Minister’s speech on 20 January highlighted the importance of continuing to collaborate with our European partners on major science, research and technology initiatives, there was no direct reference to student mobility.

Many of those consulted for the Scottish Parliament report on Scottish attitudes to Brexit, also published on 20 January, were concerned that the UK’s participation in Erasmus+ programmes may cease, which would impact negatively on UK students and professionals’ opportunities to develop foreign language skills, different perspectives on business, social sciences, engineering and sciences and valuable international experience they can draw on later in their career.

In this regard, the British Academy noted that its research found graduates and future executives who do not speak a foreign language or lack international experience may be disadvantaged in the jobs market. The British Academy considered that this may impact on UK’s researchers’ ability to participate in research collaboration.

A reason why the UK Government may be keeping its powder dry on Erasmus at present is the requirement under existing Erasmus partnership schemes with European countries such as Switzerland is to base the programme on the principle of freedom of movement. This core principle of the EU and the Single Market requires countries to allow EU nationals to enjoy residence in another Member State beyond three months where they are a worker, a self-employed person, an economically self-sufficient person with health insurance cover, such as retired people or a student with health insurance cover and sufficient resources to support themselves.

This principle is of great importance to the university sector in Scotland in particular – 16 per cent of academic staff in Scotland’s higher education sector is from the EU, rising to 23 per cent among research-only staff. There are currently 24000 students of EU nationality studying full and part time at undergraduate and postgraduate level in Scotland. If the principle of freedom of movement is lost in Scotland, as the UK Government proposes, this could cause serious difficulties for student and staff recruitment at Scottish universities, as well as impacting on the £88.8 million of research funding a year Scotland’s universities receive from EU sources.

What can be done to safeguard the investment Scottish institutions have put in over the years to build up Erasmus programmes? The Scottish Government has proposed to the UK Government options for keeping Scotland in the Single Market, including freedom of movement, with a particular focus on a differentiated solution where Scotland would be in the European Economic Area, involving for example devolving immigration powers to Scotland.

UK Government reactions have been largely dismissive of the prospects of reaching such a solution, but following the Joint Ministerial Council on 30 January the Prime and First Ministers from the four administrations agreed to intensify work on the options to allow further consideration before the UK Government submits its Article 50 notification to leave the EU in the spring. This is the therefore now the time when those who wish to preserve the benefits of student and staff mobility need to make their case to Edinburgh and London (and Cardiff and Belfast) of the importance of Erasmus and freedom of movement for staff and students more generally.

Colin Imrie is an independent policy analyst in European affairs. He previously worked on EU matters for the UK Foreign and Commonwealth Office and the Scottish Government, and also for the European Commission.