The Imagine Europe project has been collecting data since the summer on how the UK’s relationship with the EU is talked about on Twitter. Clare Llewellyn and Laura Cram present an update on the hashtags used in the debate and the sentiments associated with them. 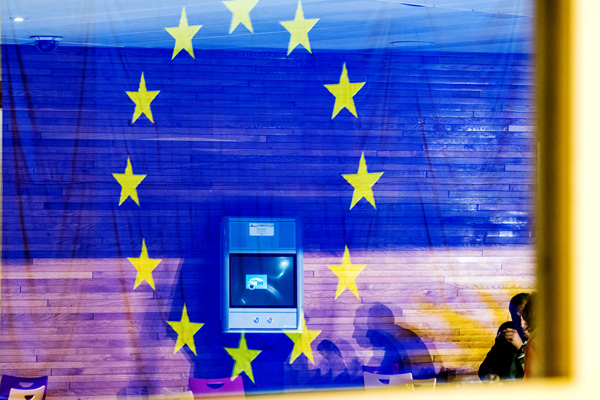 We are continuing to investigate how people discuss the EU on Twitter. Our aim is to discover common themes which may emerge leading up to the referendum on the UK’s membership of the EU. One of the elements we look at is hashtags associated with Europe and the EU. The following graph shows hashtags that are used in conjunction with either #EU or #Europe:

We have been collecting data since 9 August 2015. As a result, we have now built up quite a large dataset, which we are continuing to expand. We have gathered 3109130 tweets associated with the EU up to 27 October 2015 (using a variety of EU-based terms). See our previous article for details:

We can see that the majority of the discussion over our collection period has focused on refugees and migrants. We discussed the terms used in this debate in another post:

Twitter analysis of the terms of the debate based on a dataset collected from 7 August 2015 to 11 September 2015.

Does this trend suggest that migration will be a hot topic people will consider when voting? Or is it just a reflection of what is currently happening? We will have to do more research to find out. Keep following us for updates!

Looking at the data in more detail, we also find some points that we might not expect. For example ‘opkillingbay’ shows up with a high frequency, as does ‘yearinspace’. This is a result of the fact that searching for data using terms like ‘EU’ is a broad collection strategy. We will need to do some post-collection clean up before we present a more fine-grained analysis.

Over the last few weeks, you have no doubt seen and heard news regarding #OpKillingBay. The #Op is getting attention and that is good. To be honest, we had …

We can see immediately that the frequency of the hashtags supporting the UK leaving the EU (brexit, no2eu, betteroffout) is much higher than that of those supporting the UK staying in the EU (yes2eu, betteroffin, votein, bremain). The frequency of the ‘remain’ hashtags is so low that they don’t even appear in this chart. This is not surprising when we look at our basic sentiment analysis over the same period.

Two per cent of the tweets we have collected are in favour of remaining in the EU, compared with 98 per cent associated with a desire to leave the EU. Our regular followers will remember, however, that Twitter is not necessarily representative of public opinion as a whole. Moreover, the prevalence of a term or hashtag itself does not always indicate support. It can be more likely that people tweet against a particular subject (Barber and Rivero 2014). We will be keeping a careful eye on this and will return to the question of sentiment on Twitter in the weeks ahead.