As part of the Imagine Europe project, Clare Llewellyn and Laura Cram share some of the initial contributions to #myimageoftheEU, the initiative where members of the public can share images of what the EU means to them, and explore how symbols of the EU are used in the UK. 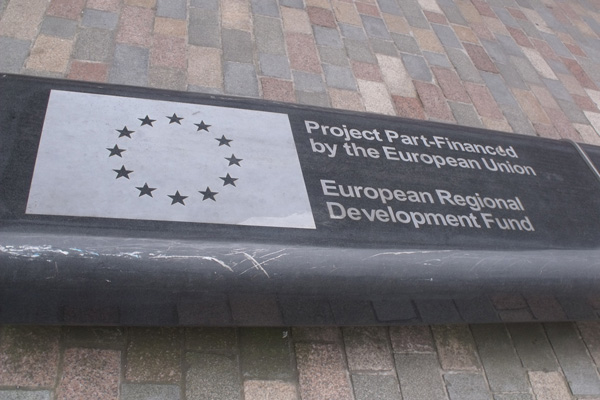 At NRLabs Neuropolitics Research, we are investigating which images of the EU predominate in popular imagination, how these images shift and what drives these shifts.

Yellowcraigs Beach, Scotland #precarious are sands of time running out for the EU? #myimageoftheEU pic.twitter.com/soGiOP8OgS

The belief that the EU flag has the potential to promote a convergence of attitudes in favour of the EU within its Member States is at the heart of many EU initiatives to promote a ‘Peoples’ Europe’. The EU symbols found on passports, driving licences and license plates act as daily reminders of EU membership.

Of course, such symbols may also act as a thorn in the side of some citizens. These images may have different effects according to the domestic context in which they are presented or people’s pre-existing attachments, or otherwise, to the EU, the UK or to its constituent nations (Bruter 2005, Cram and Patrikios 2015).

Citizens of Europe? The Emergence of a Mass European Identity | LSE Research Online

For example, exposure to ubiquitous ‘funded by the EU’ signs has not been uniform within the UK. All recipients of EU structural funding are required to comply with EU information and publicity requirements, such as the correct application of the EU logo (including on plaques and site signage).

Wales and Scotland, however, traditionally incorporate their national symbols along with the EU symbol in all signage, and refer to Wales/Scotland in the accompanying strapline. Welsh/EU-funded signage is bilingual, incorporating the Welsh dragon alongside the EU symbol, and is accompanied by the strapline: ‘EU Funds: Investing in Wales’. The Welsh language text appears above the English text.

The Scottish EU logos combine the EU emblem with the Scottish saltire and projects can choose whether to display the English language or Gaelic version. The two accompanying statements are: ‘Europe & Scotland’ and ‘Investing in a Smart, Sustainable and Inclusive Future’.

In contrast, guidance on EU structural fund-related publicity in England has traditionally been produced locally and has been much less consistent, with no mention of England in either of the English/EU structural fund straplines, nor any requirement to use an accompanying English national symbol. Some projects in England may also, however, be required to display a ‘Funded by the UK Government’ logo containing the Union flag.

Looking at imagery of EU flag, it is used differently around the UK. Here from different guidelines #myimageoftheEU pic.twitter.com/q7S3OWtgFw

The current context of uncertainty, and the possibility of Brexit, is also likely to impact on public attitudes and behaviour in relation to the EU. In experimental studies, we have found that, when presented in a context that implies even a subtle threat to the benefits of EU membership, EU symbols stop signifying the “them” to the national “us”.

Instead, they become symbols of a familiar status quo, which citizens are less willing to relinquish. These findings are consistent with the immediate upsurge in UK public support for continued EU membership at the point at which the threat of exit became an existential reality (Patrikios & Cram 2015).

However, the extent to which the ‘Leave’ campaign can present the EU as, for example, a threat to British identity and culture plays an important role in this context. In the current climate, monitoring the impact of uncertainty on public attitudes and behaviours, and understanding what the EU means to the UK public, is of central interest to businesses, policymakers and to public institutions both within the UK and at EU level.

Comparative European Politics | Better the Devil You Know: Threat Effects and Attachment to the European Union

The EU is facing unprecedented challenges and significant threats to its economic and political security. Austerity, the Eurozone crisis, rising immigration and heightened fear of terrorism all present serious challenges to the process of integration. How does this context of insecurity impact on what the EU means to its citizens? …

We are using Twitter to proactively solicit public responses to the upcoming EU referendum. Members of the UK public are encouraged to share their own photos, videos, cartoons, and comments on Twitter using the hashtag #myimageoftheEU. The contributions are being curated online as a Twitter ‘gallery’.

Our aim is to understand the role that the EU plays in the public imagination. We are monitoring and analysing these contributions and will present our results in the lead up to the referendum. We hope that this will aid our understanding of social and political attitudes to the EU and will help to explore the diversity of attitudes in the UK and its regions.