What can Twitter tell us about the views of the UK electorate ahead of the EU referendum? Laura Cram and Clare Llewellyn illustrate that, while Leave supporters continue to have a much more visible presence on Twitter, this balance has shifted, with pro-Remain tweets becoming more frequent in the latter stages of the campaign. This trend could indicate the presence of silent, or ‘reluctant’, Remain supporters who could have the potential to influence the final outcome of the vote. 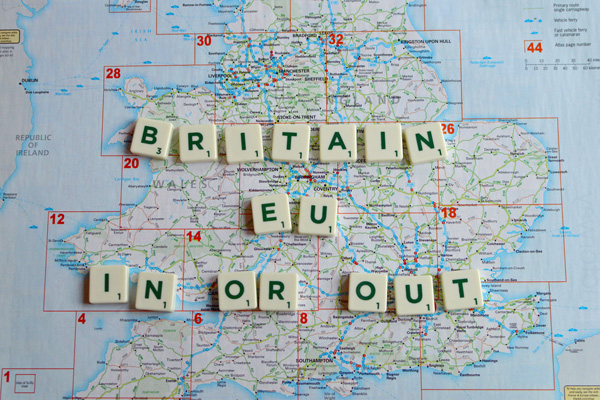 The Twitter debate is heating up as the EU referendum approaches. The trend in the opinion polls, up to the last few days, has been for growing pro-Leave support, although overall the balance is 50/50. The last few days has seen something of a rally for the Remain side. But we have been observing a countertrend to the growth in Leave support in our longitudinal Twitter sentiment analysis for some time – a countertrend that pre-dated the recent rally in pro-Remain numbers in the traditional opinion polls.

Leave has dominated the EU referendum Twitter debate throughout. There has, however, been a very clear and growing trend of increasing Remain support, although it is still much lower than Leave. Back in August and September 2015, we regularly saw 3 per cent tweeting in favour of Remain and 97 per cent for Leave. Now, we regularly see 20-25 per cent for Remain. 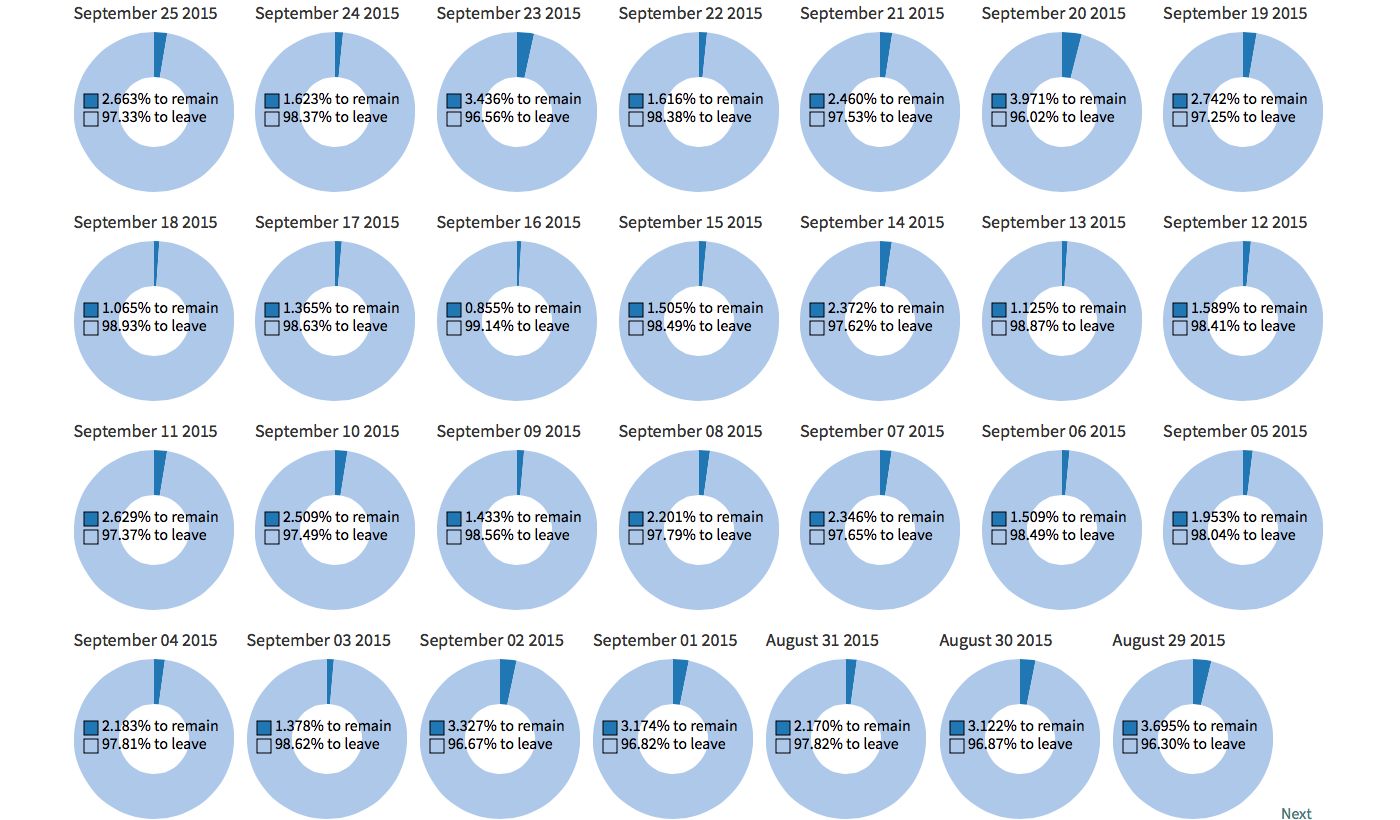 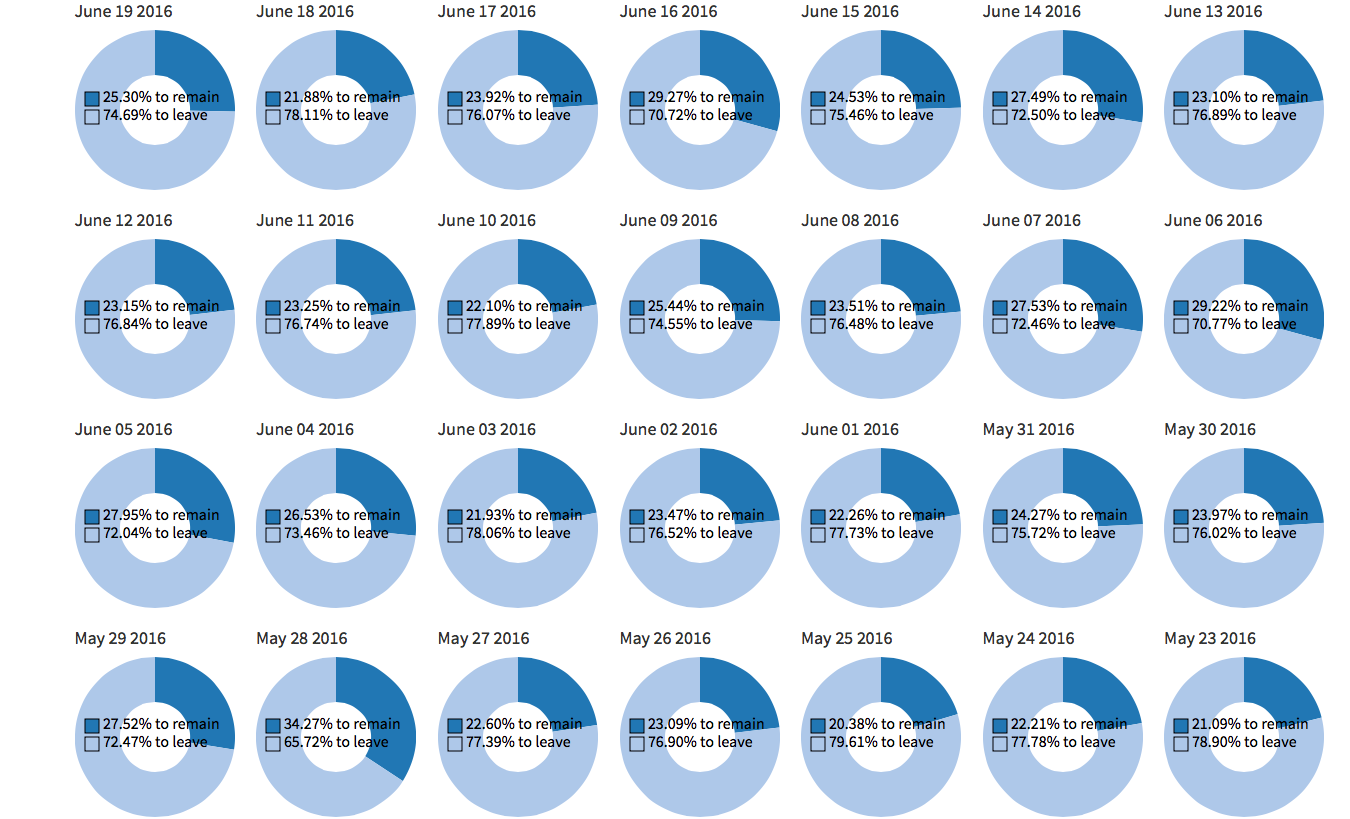 Our unique longitudinal data set allows us to compare and contrast the way that the official campaign groups use Twitter, as compared with the wider public in the Twitter stream, and to begin tracking the trends in Twitter behaviour, including the use of hashtags. We are trying to find out whether and in what ways social media data analysis might help to compliment the more traditional top-down opinion polls. 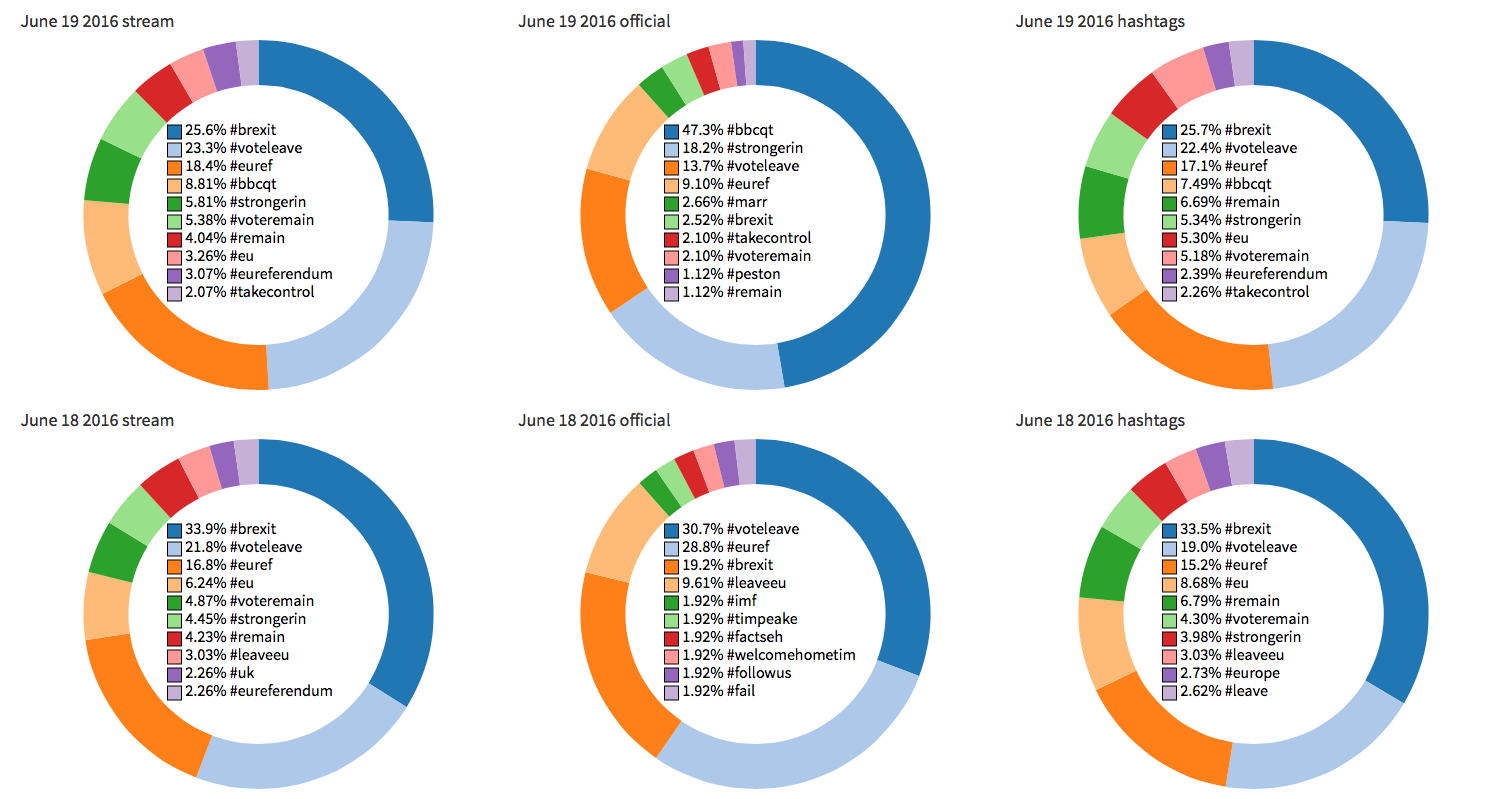 Twitter analysis has strengths and weaknesses. Twitter users are not representative of the wider public – they are self-selected users, not those chosen on the basis of careful sampling by opinion pollsters. Twitter users tend to be highly motivated (with an axe to grind), younger than average (though not exclusively young) and are more often male when engaged in political debate.

So, any insights are partial. That said, Twitter is a reflection of spontaneous, motivated behaviour. It helps us to see where those highly motivated individuals position themselves in relation to the debate, what appears to provoke peaks in motivated activity and also the overall trends in these vocal and active publics.

It is tempting to be drawn into headline-making statements, such as ‘tens of millions’ of tweets have been posted on the EU referendum, but it is important to remember that 500 million tweets are sent daily (around 6000 tweets per second). Our unique collection method allows us to put the Twitter debate on the EU referendum into a more meaningful perspective.

Although we have a huge data set containing almost 20 million tweets relating to the EU referendum, it is useful to know what proportion of Twitter users are actually talking about the EU referendum. In our sample of the wider stream of Twitter debate (a sample not collected on the basis of EU-related hashtags), those discussing the EU referendum initially constituted only about 0.06 per cent of the English-language tweets worldwide. 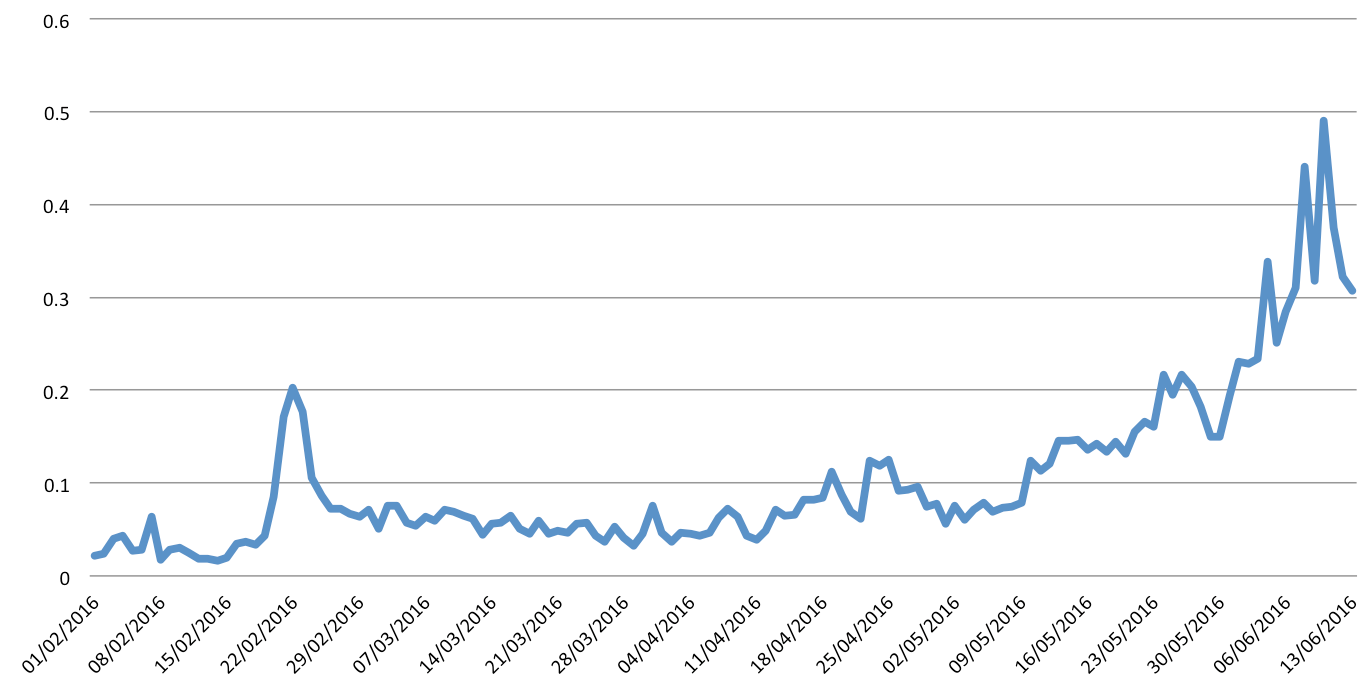 Figure 4 | Proportion of Tweets on the EU Referendum (Percentage)

To put that in further perspective, in the same sample, the proportion of Twitter users talking about other major events and celebrities is broadly similar to those now discussing the EU. One useful contribution that Twitter analysis can make is to provide a measure of issue salience in the wider public debate, as indicated by the proportion of Twitter users spontaneously engaging in discussions on an issue. In the case of the EU referendum, despite the high stakes at play, this was not very high until recently, but it is growing rapidly as the referendum approaches.

Examining patterns in the Twitter debate can also tell us the topics those motivated to tweet are spontaneously associating with the debate on the EU referendum. This allows us to explore how the EU referendum is being linked with other issues. We can also begin to break this down geographically, allowing us to examine how the different nations within the UK are tweeting about the EU referendum. 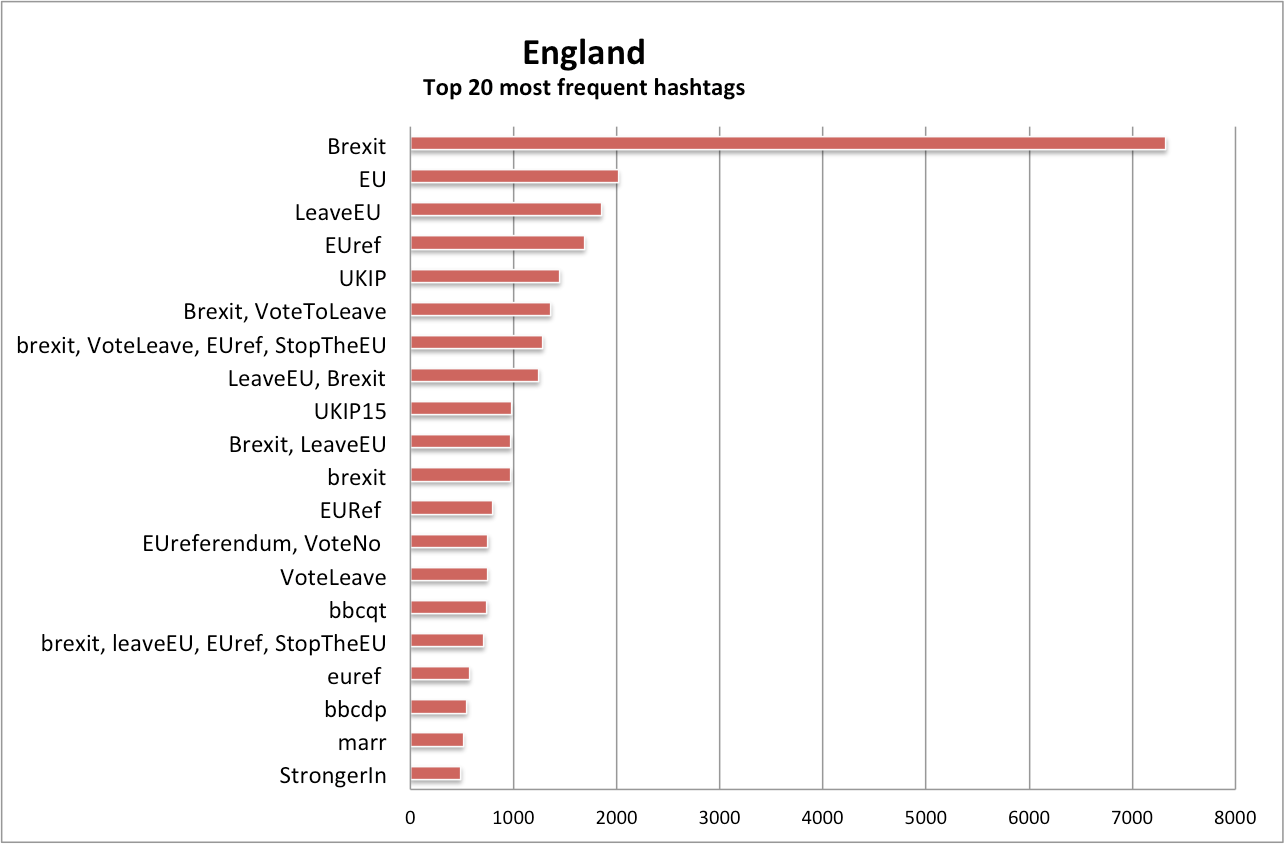 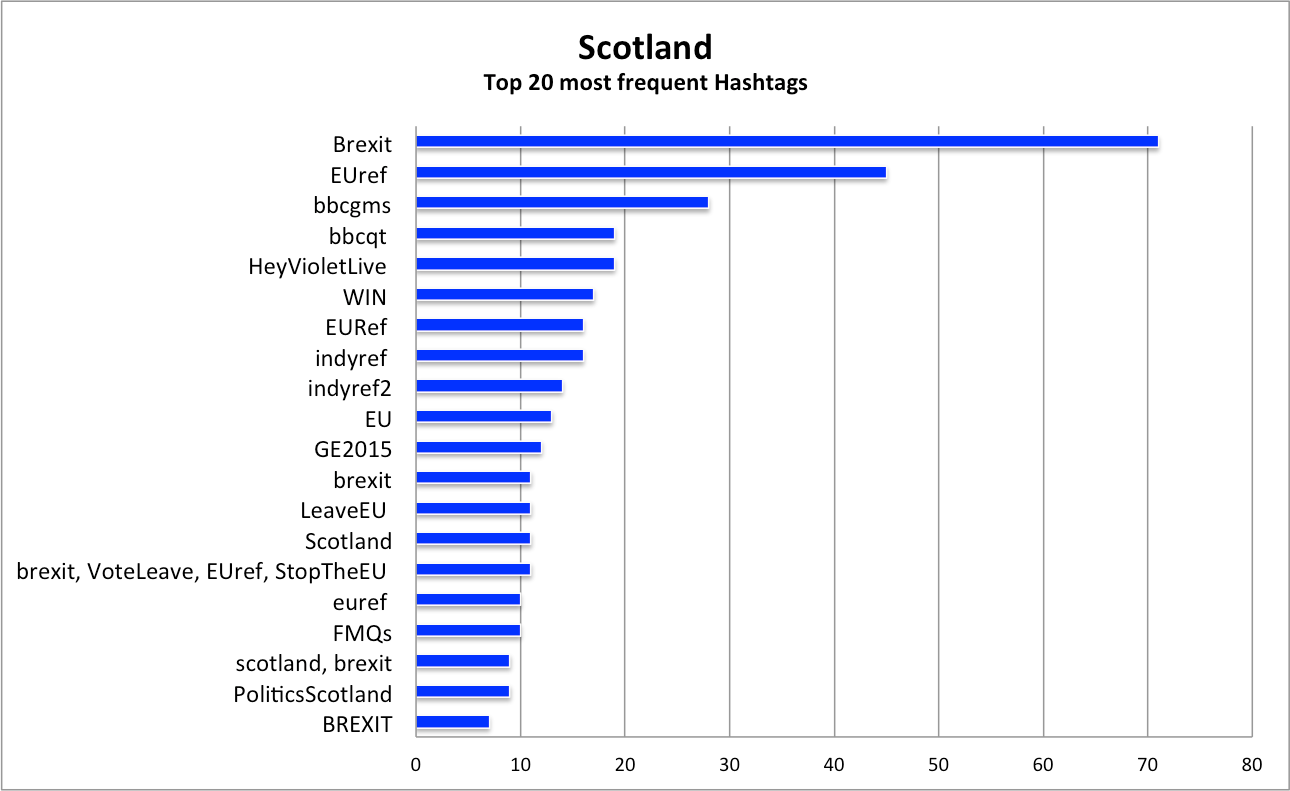 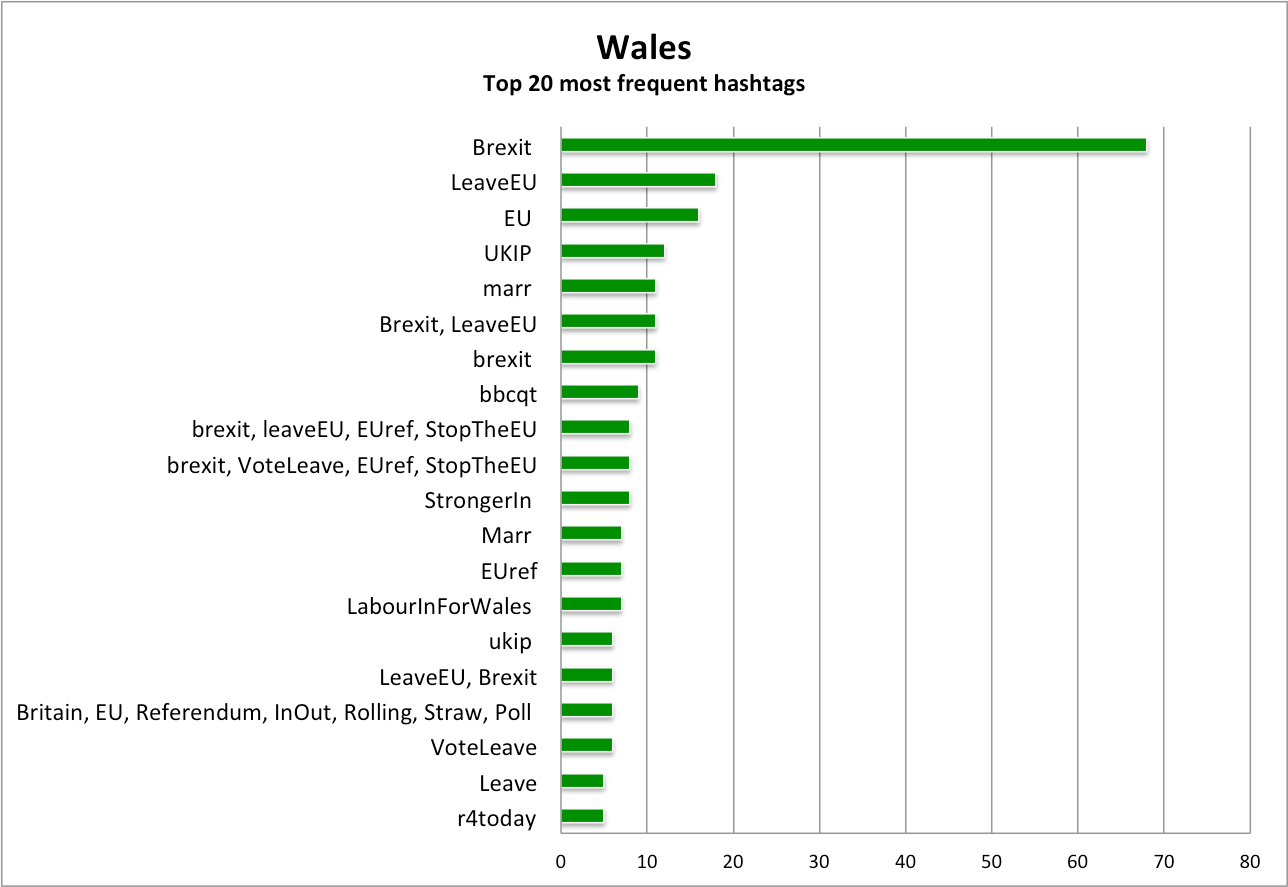 Figure 6 | Proportion of Tweets on the EU Referendum (Percentage)

We know from our Twitter data, first, that Leave as a campaign were faster out of the gates on Twitter and dominated, even when at a lower ebb in opinion polls. Leave continue to dominate on Twitter, though we are seeing a growth of pro-Remain activity. This may reflect the intensity of motivation for those in favour of Leave.

Despite very public splits in the Leave camp, there has been an impassioned commitment from Leave supporters to their cause, and a shared anti-establishment position, that is clearly deeply motivating and highly salient to those individuals.

Second, the Remain campaign got off to a much slower start on Twitter. Despite the greatly improved presence of the official StrongerIn campaign on Twitter, it has never attained the degree of impact on Twitter achieved by Leave. The picture is of a much less motivated public. This may reflect the lack of a positive cause to rally around. Early discussions around the renegotiation of the UK’s deal with the EU inevitably focused on its current shortcomings.

The smaller proportion of pro-Remain tweets compared with pro-Leave may be explained by this lack of intense impassioned motivation to champion the cause of EU membership. Early on, any bumps in Remain support were clearly event-related – for example, in response to David Cameron’s letter to Donald Tusk on October 2015 and when the UK’s ‘new settlement’ with the EU was announced in February 2016. That is no longer simply the case.

Third, the dominance of pro-Leave tweeting is apparent in England, Scotland and Wales. In line with what we might expect from the opinion polls, in which Leave support is highest in England, and lower in Scotland (with Wales in the middle), England tweets most and has the most pro-Leave Twitter presence.

Even in Scotland, however, contrary to the traditional polling picture, which has a stronger pro-Remain presence in Scotland, the dominant trend amongst tweeters is in favour of Leave. This might be explained if those activists, who believe that a Leave vote would facilitate a second independence referendum, are tweeting in favour of Leave.

It may also, however, simply reinforce our findings that Twitter is the domain of the underdog. This is reinforced by the picture in Wales, which has been leaning increasingly towards Leave in the opinion polls, and is the only nation to feature #StrongerIn in its top 20 hashtags.

Tweeters are typically highly motivated and perhaps see themselves as the underdogs in the debate. Salience, coherence and intensity are key to motivation. This explains Leave dominance. But how do we explain the pick-up in pro-Remain sentiment, which contrasted so strongly with the dominant opinion poll trends and pre-dated their recent shift towards remain, and what might it mean?

As the Remain cause has been fairly consistently under pressure in the polls, the rise in pro-Remain tweeting is perhaps unsurprising. Those previously unmotivated to act have been galvanised into action. The rise in pro-Remain tweeting is clearly no longer simply an event-related response, as it was at the early stages. What we can’t know, however, is what this says about those who are not tweeting – or what proportion of each camps’ supporters are active on Twitter.

Here we can use the imagery of icebergs. On Twitter, we can only see that part of the iceberg that is exposed. If Leave supporters, for example, are impassioned and more likely to be active, then might the dominant Leave presence in Twitter simply reflect the presence of a highly vocal minority?

Using the image of icebergs, most of the Leave iceberg would then be visible above the water. Conversely, given the much more ambivalent nature of the pro-Remain supporters, with many only lately catching on that there was a real possibility that Leave might win, it is unsurprising that few were motivated to tweet early on.

The possibility should also be considered that silent or ‘reluctant’ Remainers in the Twitter debate are being overshadowed by a vocal minority or put off by the nature of the political debate on Twitter, which is better suited to the impassioned. In this scenario, there may be more Remain support under the waterline than is evident in the Twittersphere, where we can capture only what is visible.

The increase in pro-Remain tweeting may simply reflect the greater pressure that Remainers now feel under and their increased motivation to vocalise support – with Twitter acting as the medium of the underdog. In this case, the Remain camp may indeed be considerably smaller than the Leave camp, though now more motivated. But it is important to remember that Twitter is not a representative sample – it largely provides a lens on the most motivated publics.

This article was originally published on the LSE EUROPP Blog.