It is often presumed that Scotland will continue to be part of the EU, either through a UK-wide vote to remain in the EU referendum or by joining the EU after a successful second independence referendum, writes Kirsty Hughes. She argues, however, that it is possible that Scotland could find itself outside the EU following a vote to leave, and that it should consider how to develop a differentiated relationship with the EU distinct from England. 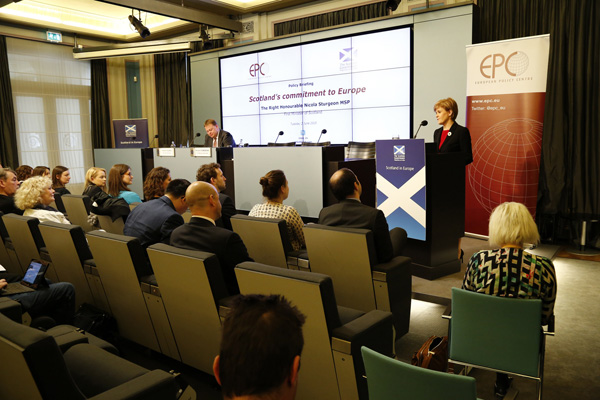 In London, the ‘leave’ and ‘remain’ campaigns are already ramping up their activities and emotional statements, ahead of the upcoming referendum on the UK’s EU membership. Yet in Scotland, for now, Europe is not a key issue, with debate and political attention focused elsewhere.

Apart from the importance of domestic political issues, this perhaps reflects a widespread view that there are only two outcomes that matter to Scotland, and that neither needs major political action now, when the EU referendum date is not even known, and David Cameron’s negotiations, however minor, are not concluded.

The first outcome – a vote to stay in the EU – would leave Scotland with the status quo on Europe that the majority in Scotland want, according to the polls.

The second outcome – a vote to leave the EU – would cause big waves in the UK and beyond. Many anticipate that an English vote to leave the EU, dragging with it a reluctant Scotland that had voted to remain in, would result in a second independence referendum, with a ‘yes’ vote leading to an independent Scotland becoming a new member state in the EU while the rest of the UK left.

While very different outcomes, in either of these two scenarios, in the end, Scotland stays in the EU – whether as part of the UK or as an independent member state.

But these two scenarios are not the only possible outcomes. There is no guarantee that a UK vote to leave the EU will definitely result in a new independence referendum, or that a second referendum would result in a ‘yes’ vote.

According to Survation’s latest poll this September, Scottish Labour and Lib Dem voters are more strongly in favour of the EU than SNP voters. As John Curtice has pointed out, these recent polls give no strong guarantee that ‘Brexit’ – the UK leaving the EU – would guarantee a ‘yes’ vote in a second independence referendum.

Moreover, if an independent Scotland was in the EU while England was outside of it, the border between the two countries would be an external border of the EU. Such challenges might not encourage previous ‘no’ voters to switch their vote to ‘yes’ to independence.

And since First Minister Nicola Sturgeon has made it clear she won’t hold another such referendum unless the polls point towards a strong and consistent ‘yes’ vote, Brexit may increase the distance in policy and political views between England and Scotland, but it may not in the short-term lead to a second independence vote – unless the polls shift strongly in the face of a UK vote for Brexit.

Could Scotland Negotiate its Own New Relationship with the EU?

Scotland would face a major political and diplomatic challenge if the UK’s EU referendum results in exit from the European Union. This would be uncharted territory for all – Scotland, the UK and Brussels (where previous departures from the EU by Algeria and Greenland shine little light on how the UK’s exit could be handled).

Would Scotland have a voice in the UK exit negotiations (led by whoever takes over – since Cameron, presumably, would have resigned having failed to persuade the public to vote to stay in)? More ambitiously, is there any way in which Scotland could create a differentiated relationship with the EU while still being part of the UK – so that whatever England and Wales negotiate (Northern Ireland facing its own major problems in face of a Brexit) need not, at least in total, be imposed on Scotland?

The current arrangements for Scotland to feed into UK positions on EU policy leave it with rather little influence which suggests that Scotland would not have much voice in the UK’s exit talks. The fact that Scottish ministers, perhaps three or four times a year, stand in for UK ministers at the Council of Ministers in Brussels is perhaps more tokenism than real power, while Joint Ministerial Committee discussions allow for occasional voice, but not necessarily much influence.

The recent refusal (twice) of the UK’s Europe Minister David Lidington to give evidence to the Scottish Parliament’s European and External Relations Committee about Cameron’s EU negotiations (in quite patronising manner) does not suggest either respect or adequate structures for consultation and influence.

An English ‘leave’ and a Scottish ‘remain’ vote in the EU referendum might of course provoke a constitutional crisis (assuming – which is possible – that the Scottish ‘remain’ vote is not strong enough to keep the UK in). Cormac Mac Amhlaigh has argued that the translation of the Sewel Convention into the new Scotland Act means that a UK decision to leave the EU might breach its commitment not to interfere in and legislate on devolved matters. Stalemate and political conflict could ensue.

Yet despite the potential constitutional challenges and rows, if there were a clear UK vote to leave the EU, then by 2017 we could expect to see the UK government negotiating the terms of exit – and of its future relationship with the EU – with Brussels (as specified in Article 50 of the Lisbon Treaty).

The biggest question – both opportunity and challenge – for Scotland at that point is whether it can not only influence that negotiation, but in fact have a related but separate set of talks so that it has a different or at least differentiated relationship with the EU than the one that England sets up.

Given the myriad of issues covered by EU, and so by UK and Scottish, law – from energy to agriculture, trade, climate change, education, fisheries, digital networks and more, the negotiations will surely take a long time and be quite complex. If the UK government, presumably at that point led by an arch Eurosceptic, were to aim to create a special UK-EU free trade agreement which would unwind much of the current areas of common EU policy then it would certainly be in Scotland’s interests to push for a differentiated approach for itself.

This has never been done before, as such circumstances have not arisen in the EU’s almost 60 year history. But the EU has shown itself to have considerable powers of political and legal imagination in other circumstances. The former East Germany was brought into the EU overnight in 1990, despite not meeting its rules and regulations set out in the EU’s acquis.

And Cyprus is part of the EU, even though it remains a divided island and the EU’s acquis only applies in the Greek Cypriot Republic of Cyprus, and not in the northern Turkish Cypriot part of the island. Meanwhile, Denmark is an EU member state, while its autonomous components Greenland and the Faroe Islands are not.

If Scotland were to attempt to create a differentiated relationship with the EU, it could ask to stay in policy areas that England is leaving. This might include areas such as university research, student exchange, common fisheries, agriculture, climate change and environment.

Doubtless, if this were feasible, Scotland would have to make a budget contribution towards these areas. And unlike an independent member state, it would not have a voice or a vote in how these areas develop in the future yet that might still be preferable to disengaging from the EU along with England.

England of course might be very likely to challenge Scotland’s right to do this, even in devolved areas, let alone in reserved ones. Brussels of course would have to agree too, and this would not be straightforward. Switzerland has discovered recently that its bilateral arrangements with the EU are not just a ‘pick and mix’ approach – with its move to limit free movement of people leading the EU to freeze education and research collaboration.

But if the UK were set to exit the EU, Brussels might be much more positively inclined to such a Scottish approach, opening the door to some of the UK, at least, staying closer to Europe than otherwise. And while the UK government might be reluctant, the political and legal arguments over Scotland negotiating a different EU relationship, at least in devolved areas, could in the end go in Scotland’s favour.

Scotland might even try to see whether it could retain free movement with the EU when England didn’t. Some may say this would be impossible, at least without a controlled border between England and Scotland but if the new and differentiated English and Scottish relationships with the EU allowed for residence, working and studying rights in Scotland but not in England, then this might be feasible. In the end, this is probably one of the most sensitive areas and one where England would be unlikely to concede.

If Scotland did manage to stay more closely integrated in the EU, it could also have knock-on advantages, as well as retaining at least some of the existing benefits of EU membership in many areas – businesses may, for example, prefer to be based in Scotland if it has fuller access to the EU’s single market.

One simple and comprehensive approach would be if Scotland, like Norway, could be in the European Economic Area (EEA). This would be much less desirable than the current status quo as Norway has little influence on new EU laws. It may still be preferable for Scotland than a full departure from the EU with the rest of the UK.

But since the EEA covers many reserved areas, including free movement, such a simple solution is hard to imagine. Scotland, England and Brussels are bound, in an exit scenario, to have to negotiate future relationships area by area, issue by issue – unless the whole of the UK chose to go for an EEA solution (also hard to imagine if a big part of the ‘leave’ campaign is to end free movement of people).

Setting the Stage for a Different Scotland-EU Relationship

It is clear that the UK leaving the EU would be a complex, tricky process – politically and legally. But for now, the opinion polls suggest this is an outcome that needs to be taken seriously.

Scotland should be planning now – and having conversations across the EU – to explore and set the scene for a different relationship for itself with Europe, in the event of a UK ‘leave’ vote.

The political response in Scotland to an English ‘leave’ vote and a Scottish ‘remain’ vote may result in a second independence referendum. But it may not. And so Scotland needs to explore now whether it could create a closer, differentiated relationship with the EU compared to England in such circumstances.

If not, Scotland may find it has little influence over whatever Eurosceptic-driven, new UK-EU relationship is negotiated between London and Brussels.

Dr Kirsty Hughes is Senior Fellow at Friends of Europe, Brussels and a writer and commentator on European and international politics and policy. She has worked for organisations including Chatham House, the Centre for European Policy Studies, Oxfam GB and the European Commission.