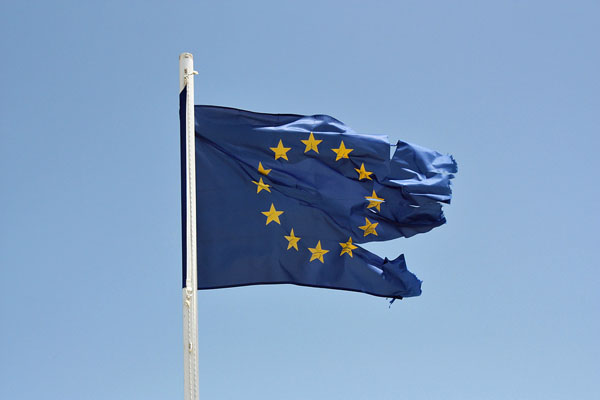 Concern over of a potential collapse of the European Union has been present for nearly a decade, emerging particularly from the Eurocrisis and as a consequence of fear of a breakup of the Eurozone. This has increased as the situation in the EU has become ever more complicated and further crises have arisen, such as the ‘refugee crisis’, the crisis of democratic values and the security crisis.

These challenges, combined with the escalation of populism and the return of nationalism in several countries, plus the question of Brexit, have strained the EU’s institutional capacity and ability to act. It has been suggested that these factors have contributed to ‘disintegrative dynamics in the EU system’.

European political leaders, ranging from Angela Merkel and Jean-Claude Juncker to Yanis Varoufakis, have referred in some respect to this notion of disintegration as a risk. Disintegration challenges the whole idea of the project of European unity and opens up the possibility of its decline which, from their perspectives, would be disastrous. The problem is that the environment of uncertainty and the lack of capacity of EU leaders to anticipate these risks have made it difficult for them to manage them.

Some say that all great things disappear in the end and that disintegration of socio-political units is always a possibility. History has shown that political entities come and go (eg the Roman, Ottoman and Austro-Hungarian Empires, the Soviet Union, Yugoslavia, Czechoslovakia). The reasons of their collapse were varied, and it is difficult to compare their decline with the present state of the EU, which is neither an empire nor a nation state.

Nevertheless, European disintegration seems clearly possible. The ideas of ‘more Europe’, integration after periods of crisis, or even ‘ever closer union’ seem out of touch with the current situation in which the EU finds itself. Instead, the reality of Europe today should lead to renewed theoretical debates within the academic community, with the aim of offering new explanations on the mutable nature of European integration and disintegration.

Within the scholarship of European studies, some have already suggested the need to address the question of European disintegration. For instance, Hans Vollard was one of the first to recently introduce European disintegration, and the need to conceptualise it, to the discussion. He sees it as a ‘multi-casual process’, but considers dissatisfaction with the EU and lack of loyalty to the project as the main forces that lead to disintegration. The latter is represented through Euroscepticism, desires to regain national control of certain policy areas, opt-outs, withdrawal and differences between the ‘centre’ and the ‘periphery’.

In the end, national governments play a crucial role in the continuation or disintegration of the EU. In addressing possible scenarios of disintegration, Jan Zielonka has argued that, ‘we have many theories of European integration but practically none of European disintegration’. In his recent research agenda for analysing potential disintegrative forces in the EU, Ben Rosamond has suggested that disintegration be seen as an ‘indeterminate process’ rather than as ‘pre-defined outcome’, and that Brexit is one of the main drivers of this process.

European disintegration, far from being an eventual outcome that might exist in the future, is in fact a present reality. From a philosophical perspective, the fact of simply talking about disintegration implies recognition of its existence. Since disintegration appears to be a dominant phenomenon, scholarship should well respond by ceasing to focus on European integration and instead by seeing the EU the other way around: as a continuous process of disintegration. For that task, the discipline of Futures studies might provide useful methodological tools for analysing the potential integration or disintegration of Europe.