The early entry into force of the Paris Agreement raises immediate Brexit-related international policy questions for the UK, writes Annalisa Savaresi. She argues that, as the UK considers its future relations with EU climate policy, it is also faced with existential questions concerning its own climate policy and how it is formulated, including the role for the UK’s devolved administrations. 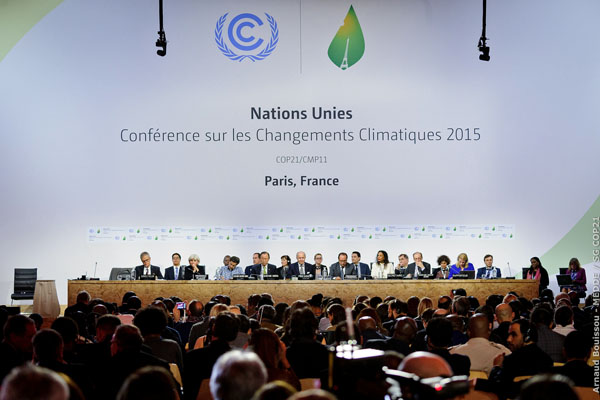 Following a record-breaking ratification process, the Paris Agreement adopted in December 2015 will soon enter into force. In the aftermath of the Brexit vote, however, this milestone for safeguarding the climate raises difficult questions for the EU and the UK.

EU Member States have historically implemented joint measures to reduce their emissions. Now that the UK has decided to leave the club, it needs to figure out how to disentangle from obligations designed to achieve EU climate change objectives and to comply with EU international obligations under the climate regime. The early entry into force of the Paris Agreement has therefore put pressure on both the EU and the UK to solve these matters earlier than either would have liked.

Entry into force is a technical step in the making of international law, which marks the moment when the obligations enshrined in a treaty become legally binding upon its parties. There is nevertheless an important distinction to draw in relation to the Paris Agreement. Whilst the agreement will enter into force in November 2016, parties’ commitments concerning climate change mitigation are framed in cycles that only begin in 2020.

While these negotiations have barely started, the early entry into force of the agreement has important immediate consequences. The first meeting of the Conference of the Parties serving as the meeting of the Parties to the Paris Agreement (CMA) will already convene in Marrakech in November 2016, in conjunction with the meetings of the parties to other climate treaties.

However, only states that have ratified the Paris Agreement will have a seat at the table. Even though the first meeting of the CMA is going to be a largely procedural and symbolic affair, in time this body will start to exercise its lawmaker prerogatives under the agreement. Having a seat at the table, therefore, will matter.

When depositing their instruments of ratification of the deal, parties also communicate their first Nationally Determined Contribution (NDC). NDCs contain details concerning the actions that each party intends to undertake to contribute to keeping the global temperature increase within the two degrees Celsius goal enshrined in the agreement.

The NDCs submitted every five years represent the benchmark against which parties’ implementation of obligations under Paris Agreement will be assessed and scrutinised. One of the principles of this assessment is that each successive NDC has to progress beyond previous undertakings – also known as the ‘no-backsliding’ principle.

Therefore, a party’s change in financial, political or economic circumstances cannot in principle be used to justify a decrease in what can be considered its ‘highest possible ambition’ compared to the level contained in its previous NDC. The ratification process of the Paris Agreement has seen most parties rely upon the intended nationally determined contributions (INDC) submitted in 2015. The EU referendum, however, has raised critical uncertainties both for the EU and the UK.

In line with EU Member States’ practice to implement jointly their commitments under climate treaties, in October 2016 the EU deposited its instrument of ratification of the Paris Agreement, and submitted an unaltered copy of its 2015 INDC. Those EU Member States which have already ratified the agreement have done the same.

The EU NDC envisions a target for EU member states to collectively reduce their emissions by at least 40 per cent by 2030 compared to 1990 levels. The contribution of each EU Member State toward reaching this target has yet to be determined. Nevertheless, the Paris Agreement specifically requires that, when communicating its NDC, the EU also notifies the emission levels allocated to each Member State within the relevant time period.

In the meantime, the internal process to decide how to distribute the responsibility for achieving the emission target in the EU NDC remains ongoing. While the sectors covered by the EU Emissions Trading System (ETS) are subjected to a pan-EU target, in the summer of 2016 the European Commission presented a proposal for a burden-sharing arrangement covering emissions from other sectors for the period 2021-2030. The proposal envisions that the UK will contribute to reducing EU emissions in non-EU ETS sectors by a hefty 37 per cent by 2030, compared with 2005 levels.

Leaving aside the controversies that normally accompany the setting of each Member State contribution to reaching the EU target, another considerable obstacle is that the UK – one of the largest emitters in the EU – will in all likelihood no longer be a member of the EU in 2021. In other words, the EU NDC does not factor in Brexit. It would have made little sense for it to do so now, since the UK’s withdrawal process has not yet been formally triggered.

However, as Brexit kicks in, adjustments will have to be made, both on the EU and UK sides. On the EU side, if it intends to stick with the target enshrined in the EU NDC, Member States may have to make up for any shortfalls in reaching the EU target caused by the UK’s departure. Alternatively, the EU may decide to lower the target enshrined in its NDC, thus potentially exposing itself to accusations of backsliding.

The UK side of the equation looks equally complex. In her first address to the UN General Assembly in September 2016, Prime Minister Theresa May announced that the UK intends to ratify the Paris Agreement before the end of the year. In order to ratify the Paris Agreement, however, the UK should produce an NDC. The UK is therefore faced with the choice of either relying on the EU NDC, like other EU Member States, or producing one of its own.

If it decides to go for the first option, the UK will have to retract its NDC after Brexit and submit a new one. The Paris Agreement does not specifically mention the option for parties to resubmit their NDC. It only provides that parties may ‘adjust’ their existing NDCs ‘with a view to enhancing its level of ambition’ (Article 4.11).

This expression would seem to suggest that, if the UK retracts its NDC, it would ipso jure be required to do more than what was envisioned in the EU NDC. Yet, as noted above, the UK contribution to the EU NDC remains to be determined, as does the timeline for the EU notification of each Member State’s contribution to achieving its NDC.

Given these uncertainties, the UK may decide to adopt its own NDC. The preparation of the UK NDC is, however, likely to take time. Even though the UK already has in place climate laws and policies with timelines that go well beyond the timeframe of the first NDC cycle, it needs to decide whether and how to disentangle from the vast body of EU law on climate change.

First, the UK has to decide whether or not it intends to continue to be part of the EU ETS. This is a decision of great consequence for the approximately 1000 UK power stations and industrial plants currently included in the EU ETS. These installations presently hold allowances whose financial value is contingent on continued participation in the system. Should the UK decide to discontinue its role in the EU ETS, it would have to find ways to phase out the scheme whilst safeguarding the investments of these actors.

Relatedly, it would make sense for the UK to opt to continue to implement climate change mitigation action in cooperation with the EU, like European Economic Area countries. This intention is explicitly mentioned in the NDCs of Iceland and Norway. However, whether or not the UK would be able to avail itself of the option of remaining in the EU ETS clearly depends on the outcome of Brexit negotiations with the EU, which have yet to start.

The process of drafting the UK NDC also raises complex constitutional questions on the involvement of devolved administrations in exercising the UK’s regained powers to determine climate law and policy. This is likely to be particularly tricky, for example, on matters such as renewable energy.

Strict targets on renewable energy would neatly match the priorities of some devolved administrations, like Scotland, but are not looked upon favourably by the current UK government. As it determines its climate change policies outside of the EU, the UK government may well be faced with new demands from the devolved administrations to take greater control over climate action.

Sitting at the Table or Sitting on the Fence

The early entry into force of the Paris Agreement has caught the EU at a rather complicated moment. Up until now, the EU has been in the driver’s seat, setting the course of EU Member States’ climate action. Conversely, with Brexit, the UK will become the sole arbiter of its climate laws and policies. With so many complex Brexit questions all around, it is hardly surprising that so far this specific issue has received little attention. Yet, the early entry into force of the agreement will force the EU and the UK to make difficult decisions.

The EU has taken a gamble by submitting an NDC without knowing exactly what each Member State will contribute to achieving its common target. It has presumably taken this decision to avoid the embarrassment of not having a seat at the CMA table. It is established practice for EU members to leave the heavy-lifting at international climate negotiations to the EU. This makes perfect sense in the context of the EU climate law and policy architecture, which accords a lead role to the EU and its institutions. It also makes sense at the technical level, as the EU is equipped with many highly-skilled climate change officials, who play a prominent role in international climate negotiations.

Conversely, at least for the time being, the UK is sitting on the fence. In spite of the Prime Minister’s announcement, the UK may well decide to delay its ratification of the Paris Agreement. For as long as it does, it will not have a seat at the CMA table. In the interim, it may suit the UK to sit on the sidelines, while its delegates learn how to manage climate negotiations on their own, without relying on the vast human capital and technical expertise of the EU. Nevertheless, the UK should consider carefully how long it can afford to wait before joining the conversation.

Annalisa Savaresi
University of of Stirling

Dr Annalisa Savaresi is Lecturer in Environmental Law at the University of Stirling. Her research focuses on climate change, biodiversity, forestry, environmental liability, renewable energy and the interplay between environmental and human rights law.