Polling shows that people in the various parts of the UK might vote in different ways in the EU referendum, writes Charlie Jeffery, with Scotland and Northern Ireland expressing a clear intent to remain, and England and Wales swaying on the edge of remain or leave. He suggests that, if the nations end up on different sides of the outcome, this could have constitutional implications for the UK. 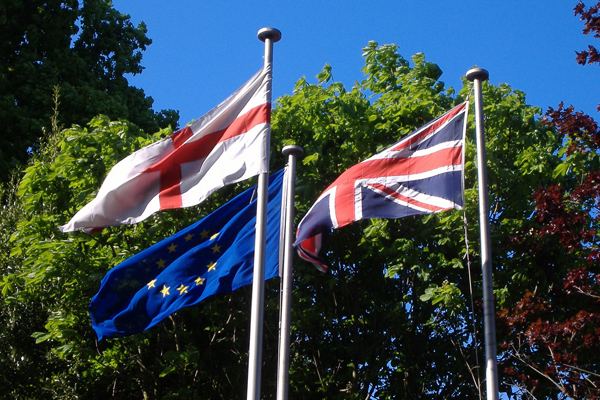 The EU referendum has the potential to divide opinion in the UK on national lines. Over the last few years, people in England have appeared the least enthusiastic in the UK about remaining in the EU, people in Scotland the most enthusiastic, and people in Wales somewhere in between (there was little data to be had on how people in Northern Ireland felt).

In one sense, these differences on opinion are by-the-by. The UK is a single constituency for the referendum, so it is only how the vote stacks up in the UK as a whole that matters. But in another sense, these differences could be crucial. The Scottish First Minister and leader of the Scottish National Party Nicola Sturgeon raised the stakes in October 2014 when she argued that any ‘Leave’ outcome would need to be endorsed in each part of the UK, effectively claiming a Scottish veto over a UK decision to leave.

Sturgeon has made the same point on a number of occasions since, but has gone further still by tying the EU referendum outcome to the question of Scotland’s continuing membership of the UK. Before the UK general election last May, she said a second Scottish referendum would only be called if there were ‘material change’ in the conditions of Scotland’s relationship with the rest of the UK.

In a Brussels speech in June, shortly after the SNP’s astonishing success in that election, she made clear that a UK vote to leave the EU overriding a Scottish preference to stay ‘could be one scenario’ producing such material change. And at the SNP conference last October, addressing David Cameron, she made clear that in those circumstances, you may well find that the demand for a second independence referendum is unstoppable.

So how likely is that scenario? The WhatUKThinks poll of polls – a moving average of the last six EU referendum polls – shows that ‘Remain’ has been ahead consistently over the last few months by as much as ten points (at 55-45 per cent), but also by as little as a knife-edge two points (51-49 per cent). If the margin between ‘Remain’ and ‘Leave’ at UK level were small overall, then differences in voting behaviour among the UK’s nations could easily leave different parts of the UK on different sides of the referendum outcome.

Polling at reliable sample sizes in each UK nation is, unfortunately, still too rare – except in Scotland (as is the disaggregation of English data from GB or UK-wide polling. England’s size within a GB/UK sample would often be big enough to draw reliable statistical inferences). However, the table below collects data from seven polls that produce all-England findings, eleven Scottish polls, and three each from Wales and Northern Ireland. 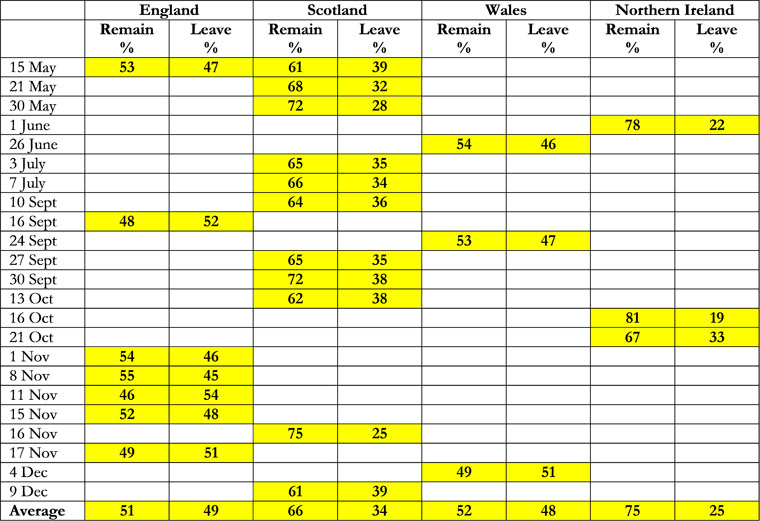 All were conducted in the period after the UK general election on 7 May 2015 and the end of December 2015, all with sample sizes of at least 1000 respondents and all conducted by mainstream polling companies. ‘Don’t know’ and ‘Wouldn’t vote’ responses have been excluded to provide a simple remain/leave split. Different variants of the ‘Remain-Leave’ question were asked until the start of September, after which there was a convergence on the Electoral Commission’s recommended referendum question wording: ‘Should the United Kingdom remain a member of the European Union or leave the European Union?’

The table needs to be read with some caution. These are polls done in different places on different days by different companies, for a while with different questions. Only in Scotland has there been regular polling, though more data became available for England towards the end of the year. Polling is especially patchy in Wales and Northern Ireland.

This said, there is much of interest to note. The four UK nations split into two pairs. England and Wales appear just about in favour of remaining, though both have individual polls showing a small ‘Leave’ majority. Scotland and Northern Ireland are firmly in the ‘Remain’ camp. No poll has recorded less than a 60 per cent majority in Scotland for remaining, with an average of 66 per cent in the ‘Remain’ camp. Northern Ireland (though with only three polls, two of them bunched together) is even more committed to remain.

This mix of two ambivalent nations and two Euro-enthusiasts could produce striking outcomes. If (on an even turnout across the whole of the UK) England were to vote something like 54 per cent to leave – as in the 11 November 2015 poll – an overall ‘Leave’ outcome would be likely even if Scotland and Northern Ireland were strongly in favour of remaining, simply by English weight of numbers.

A clear majority in England, when it has 83.9 per cent of the UK population, is difficult to outweigh elsewhere. So in that scenario, Nicola Sturgeon would be talking of material change (and we would all no doubt also be talking about the risk of upsetting the delicate balance of Northern Irish politics).

But the table also suggests a scenario where a slim English majority – say the 51 per cent to leave recorded on 17 September 2015 – would be outweighed by the clear preference in Scotland and Northern Ireland to stay. We could expect a number of prominent voices in that scenario complaining of England being kept in the EU against its will, and perhaps challenge the legitimacy of the result in a ‘reverse-Sturgeon’, calling for an English veto over the choices of those outside England. The incipient stirrings of an English nationalism, nurtured by the Conservatives in the 2015 UK general election campaign, could well find a more robust platform.

Of course, if everyone voted in line with the average of the polls of the last few months the UK would remain in the EU, with each part of the UK sharing in that decision, perhaps closing the issue down for a generation. But don’t count on it.

The initial version of this article mistranscribed one poll finding for Scotland, slightly reducing the average ‘Remain’ score. Average for ‘Remain’ is 66 per cent, not 65 percent and for ‘Leave’ 34 per cent, not 35 per cent.