Although European integration is often considered progressive and one-way, demands for limits on or even reversals of power have grown in recent years, write Viviane Gravey and Andrew Jordan. Looking at EU environmental law, they conclude this reversal process of policy dismantling does exist, but it is relatively limited, and they set out a research agenda to further explore the scope of dismantling. 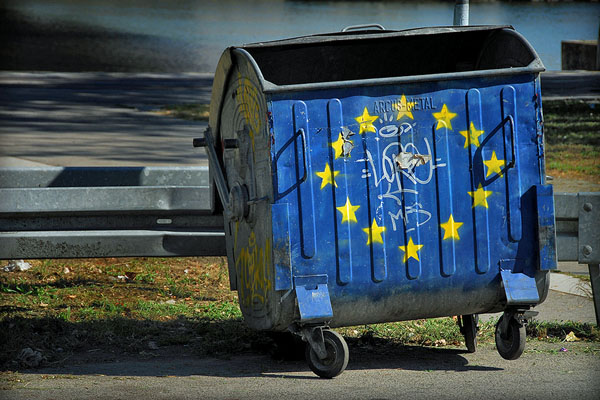 A recent Pew Research Center poll found that 42 per cent of Europeans were keen for some ‘powers’ to be returned to the national level, with only 19 per cent favouring further centralisation at EU level. The idea of ‘less Europe’ is not new: calls for it date back to the great subsidiarity debate of the 1990s that followed the Danish ‘No’ vote on the Maastricht Treaty. But have these repeated demands led to anything? Does the European Union have a reverse gear, or is ‘more Europe’ always the default choice?

Rollback, or policy dismantling, is a distinctive direction of policy change. It is the opposite of policy expansion. As policy is made at different levels in the EU, in theory so can policy dismantling happen both at the EU and national (even regional) levels.

This does not mean that EU policies are necessarily eternal, or that further policy expansion is a given. Instead, it means that dismantling may still be happening, but from within the EU policy-making system. Indeed, EU policies can in principle also be dismantled at EU level, through legislative reform, if a new directive removes or waters down existing provisions, reduces the scope of application or the penalties for non-compliance.

In order to investigate whether the EU has a reverse gear, we studied changes to EU environmental rules, a policy area which has featured prominently in calls for cutting EU ‘red tape’ and for greater subsidiarity. In the 1990s, EU water and air directives were targeted, and in the 2000s, the EU’s waste legislation and again air policy were the focus. The 2010s saw calls to weaken biodiversity, chemicals, waste and air legislation.

We identified all pieces of EU environmental legislation targeted for dismantling over a 22 year period (1992-2014), which had been subsequently revised through the EU legislative system. The dataset comprises 19 directives and regulations, revised between one and five times, which yielded 75 legislative texts. These policies cover a wide range of environmental issues from bathing water and eco-labels, to air quality and electronic waste.

We developed a new coding scheme and policy typology, and coded changes to directives and regulations across six different dimensions: changes to policy density (eg the number of instruments within a directive, or directives within a policy area), scope (eg how many businesses are affected by the rules) and settings (eg how ambitious it is) at both the level of the entire piece of legislation and that of its individual instruments, comparing different generations over time.

These results are striking, as our dataset is composed of directives and regulations openly targeted for dismantling. Yet even for these, dismantling was the least frequent direction of policy change (Figure 1). Moreover, there was more policy expansion than policy dismantling.

These results confirm that the EU has a reverse gear. The EU is not only a driver of policy dismantling in its Member States. It has become a new locus of dismantling in its own right. These results, along with growing calls for austerity and cutting red tape at EU level, underline the need for further research.

First, how significant is policy dismantling? This question raises major methodological considerations regarding how dismantling is measured, in particular whether expansion in one area can offset dismantling in another. Second, is it just a story of EU environmental policy, or does it apply to other policies as well? Recent work on the reduced rate of policy proposals has shown that the European Commission has slowed down policy expansion across a number of policy areas, but is dismantling also widespread?

Third, what of the politics of dismantling? Why (and how) is dismantling taking place at EU level? The mix of expansion and dismantling found at EU level echoes existing research on welfare state retrenchment in consensual systems and ‘expansionary dismantling’. Examples of policy dismantling occurring through the EU legislative process appear to confirm that supranational institutions, namely the European Commission and the European Parliament, are not ‘hard-wired to seek ever closer union’ through policy expansion, or even in favour of maintaining the status quo.

More research is needed to understand these respective roles and rationales in pursuing policy dismantling. Addressing these and other questions, such as the role of non-state actors or the strategies used to build dismantling coalitions in the EU, constitutes a rich and promising research agenda on EU level dismantling.

This article draws from the authors’ recent publication in the Journal of European Public Policy special issue ‘Best Papers from the European Union Studies Association 2015 Biennial Conference’: Does the European Union have a Reverse Gear? Policy Dismantling in a Hyperconsensual Polity.

Viviane Gravey is PhD Candidate in Environmental Sciences at the Tyndall Centre for Climate Change Research and Senior Research Associate at the University of East Anglia. Her research interests include EU environmental and agricultural policies. She is Chair of the UACES Student Forum.

Prof Andrew Jordan is Professor of Environmental Sciences at the University of East Anglia. His research interests include environmental politics, climate change, sustainable development governance and policy coordination. He is Chair of the Innovations in Climate Governance (INOGOV) research network.