The UK Prime Minister’s speech and letter today have outlined the general parameters for the renegotiation of the UK’s membership of the EU, writes Drew Scott. He analyses the section of the letter on economic governance and he suggest that, although we now know more about the UK’s position, the negotiations and the means of implementing any deal agreed will be challenging and unpredictable. 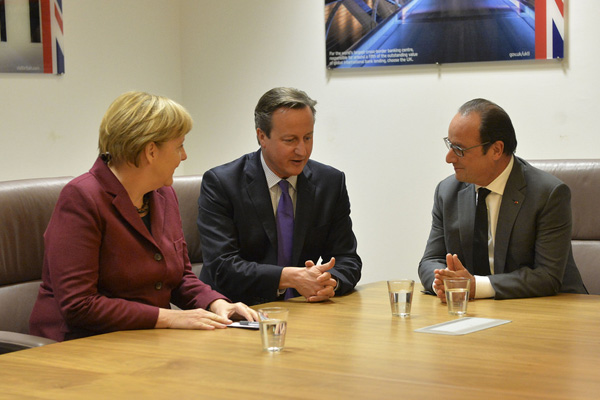 Today, in a speech to Chatham House, David Cameron set out in slightly greater detail what his government will seek in its renegotiation of Britain’s terms of EU membership with the other 27 Member State governments. At the same time, a letter was dispatched from Downing Street to Donald Tusk, President of the European Council, setting out in the same terms the government’s objectives in the forthcoming negotiations.

So what began as a strategy to appease the right-wing Eurosceptics in his own party and head off the electoral challenge of UKIP has morphed into a national debate that will, in Cameron’s own words, determine ‘this country’s destiny’.

The Prime Minister’s letter sets out four areas for negotiation. In general, the tone struck is constructive and, crucially, inclusive. It contains no threats should negotiations fail on key issues and explicitly states that no ‘vetoes’ are being sought. All the while, it resonates of inclusivity by representing not just Britain’s self-interest but a wider sense of shared purpose between the UK and other reform-minded Member States.

Not least those outside the Eurozone. In the internal diplomacy of the EU, these nuances matter. In this way, Britain’s objectives appear as reasonable and representative, rather than narrow and exceptionalist. This is far from insignificant as the real negotiations commence, and one suspects it reflects the results of Cameron’s shuttle diplomacy around EU capitals over the past few months.

In substantive terms, the British letter points to desired outcomes rather than legal or political means of achieving these outcomes. Again clever, and not without significance.

All Member States recognise that the ‘how’ of the reform agenda is just as complicated – both legally and politically – as the ‘what’. However, few reading the letter will be in any doubt that if these objectives are to be realised – and in one section Cameron makes explicit that he is looking for ‘legally binding principles’ – a combination of treaty reform and changes to existing secondary EU legislation will be required. Being explicit on the complexities and length of time involved in achieving the desired outcomes in a legally watertight form, even after headline political agreement had been reached, would expose the Prime Minister, and his strategy, to even more criticism from the anti-EU lobby at home.

What is the UK seeking, and does this letter take us any further forward in estimating the likelihood of success? The four themes identified are no surprises – economic governance, competitiveness, sovereignty and immigration. I will reflect on the first of these, leaving to others to comment on the remaining three areas. However all concede that immigration poses the greatest challenges if a compromise – and a legally watertight compromise – is to be found.

In the section on economic governance, at first sight there seems little controversial in the UK position. Seeking a statement that the EU has more than one currency simply reflects the reality, while ensuring the integrity of the Single Market – in this context the single financial market – simply echoes a foundational principle of the EU treaties and one the European Commission is legally bound to uphold.

Similarly, few non-Eurozone countries will take issue with the proposition that participation in the Eurozone banking union must be voluntary – this reflecting no more than the status quo ante. Furthermore, that the UK Government is seeking copper-bottomed assurances that non-Eurozone countries should never be required to provide financial support to assist bail-outs aimed at maintaining the integrity of the Eurozone is no surprise and is unlikely to cause waves among our partner countries.

However, then the waters become somewhat muddied. The UK seeks assurances – as well an appropriate safeguard mechanism – that the regulation of UK financial services (including one assumes of financial services operators) will remain under the competence of UK authorities – namely the Bank of England and not the European Central Bank.

Moreover, this provision should be extended to cover all non-Eurozone countries. Just what this means is unclear. Does it imply that in future EU legislative proposals relating to the ‘stability and supervision’ of financial services (and providers) will be subject to a double majority, such that not only must they command the normal qualified majority of EU Member States, but additionally a (simple) majority of non-Eurozone countries before being enacted?

If that is the case, then it implies an extension, possibly to the single financial area legislative arena, of the double majority agreement the UK secured in 2012 whereby a simple majority of non-Eurozone countries can block (non-legislative but binding) proposals by the European Banking Authority that apply to all EU banks if they do not agree with them.

This interpretation certainly would be consistent with some reports on Chancellor George Osborne’s determination to protect the status of the City as the EU’s dominant financial centre against EU legislation that might weaken this position. While any such proposal does not represent a British veto over this element of single market legislation, which none of our partner countries would tolerate, it certainly does suggest a change in the culture of legislating at least in the Council of Ministers. Here political agreement may be possible and appropriate voting ‘conventions’ perhaps agreed, though, one suspects, treaty change not.

However, in all of today’s discussions and presentations the thorny matter of ‘how’ the results of the UK renegotiations will be given effect has been ignored. Wisely so. For it remains unclear how much will require changes to the EU treaties, what can be achieved by changing existing EU legislation, and how much can be consigned to a political declaration appended to the EU treaties which while having no legal force would be respected as a matter of practical politics by the other Member States.

Any of these options – and one suspects all will be required – take time, more time than is available between now and the end of 2017 by which point a UK referendum must be held. The consensus view is that the agreements reached in these negotiations that require treaty change will be bundled into a protocol that will be respected immediately, but which will have no legal force until the a revised treaty including that protocol has been ratified.

Changes to secondary EU legislation will take time to wind their way through the EU legislative machinery, and cannot be guaranteed, but will not require treaty change. In all of this there are risks, regardless of the commitments EU Heads of Government give the UK that a firm deal has been struck. For it is not within the gift of Heads of Government to ratify EU treaty amendments: that is a matter for national parliaments and possibly national electorates.

So even with a clearer – though far from exact – list of UK demands, the real negotiations have yet to begin and a long, technical and potentially bumpy road lies ahead. But in diplomatic terms one has to acknowledge that the UK Government’s opening gambit reflects a degree of sensitivity as well as realism to the challenges ahead.

Already Cameron’s critics are lining up to attack his renegotiation objectives as lacking in substance, while supporters of British membership of the EU see nothing here that adds up to a new ‘vision’ either of the EU or Britain’s place within it. Ultimately that may be a problem for the pro-EU lobby in the forthcoming referendum debate. As last year’s referendum in Scotland demonstrated, the public tends to respond favourably to a positive, forward-looking narrative when asked to vote on such important matters. That element of the case for continued EU membership is absent both from the letter and the government’s current narrative, and unless corrected that may prove costly to the ‘stay’ campaign.

Prof Drew Scott FAcSS is Co-Director of the Edinburgh Europa Institute and Professor of European Union Studies at the University of Edinburgh. An economist by training, he specialises in European economic integration, including subsidiarity, Economic and Monetary Union and cohesion.