In the context of the UK’s referendum on membership of the EU, Clare Llewellyn and Laura Cram are investigating how people use social media to talk about the UK-EU relationship. They provide the first update on the project, which has a presence on Storify, explaining the process of building a dataset on Twitter to keep track of the discussion. 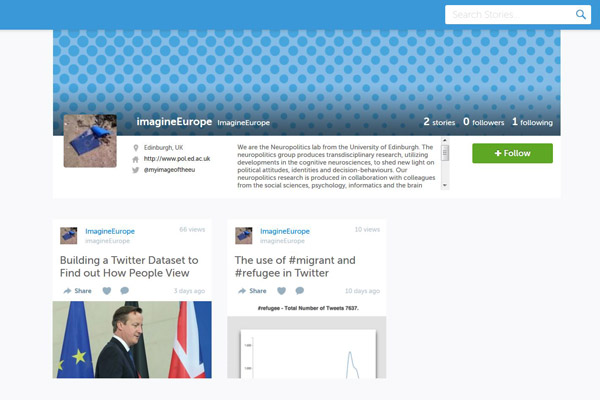 We are building a dataset to explore the relationship between the UK and the EU and how people talk about this relationship. We are using social media – in particular Twitter – to find out what people are saying and to investigate how this changes leading up to a referendum on the UK’s membership.

In fact, we are going to end up building three databases: one on what is in the Twitter sample stream, one gathered using specific hashtags and one gathered by following what we are calling influencers – basically those that talk specifically about the European Union and are listened to. This ranges from MPs to think tanks, to academics and to pressure groups.

Of course, Twitter data is not representative of the whole population. It is used predominantly by young (74 per cent are between 15 and 25 – see Beevolve) and politically active or by those with a particular axe to grind (‘Twitter is dominated by individuals with strong political views’ – see Barberá 2015). Nevertheless, social media is increasingly the space in which major events and political decisions are debated by large numbers of people. This became very clear during the recent referendum on Scottish independence. We will explore how the debate on the UK’s relationship with the EU is framed and reframed within Twitter and how it relates to the wider offline political conversation.

An Exhaustive Study of Twitter Users Across the World

Our Social Media Monitoring platform mines through millions of conversations every day for our customers. Out of these millions of conversations, quite a few happen to come from Twitter. We realized that we could do a large-scale in-depth study of Twitter users to better understand what is the average profile of a person using Twitter and hence this mammoth study on 36 million Twitter user profiles.

Wilf Family Department of Politics, New York University, 19 W 4th Street, 2nd Floor, New York, NY 10012. Politicians and citizens increasingly engage in political conversations on social media outlets such as Twitter. In this article, I show that the structure of the social networks in which they are embedded can be a source of information about their ideological positions.

The wordle shows the frequency (bigger = more) of hashtags in the dataset on 7 August 2015.

Frequency of the use of hashtags in our dataset 25th August when we added the tags #referendum #eu, and #europe pic.twitter.com/41th5uh81l

In response to events in Europe, we added #refugeesWelcome on 3 September 2015:

Frequency of the use of hashtags in our dataset 25th August when we added the tag #refugeeswelcome pic.twitter.com/zr9r47Mx1m

Across the whole time period:

Obviously there is a lot more to do and this is just a taste of what we are looking at. Look out for our regular updates as the project tracks developments in the debate on the UK’s continued membership of the EU and follow us @myimageoftheEU.

Shortlink for this article: edin.ac/1gFKWUe

Clare Llewellyn is PhD Candidate in Informatics at the University of Edinburgh and Research Assistant in the European Union in the Public Imagination project. Her research focuses on user-generated content on the Internet.
.

Prof Laura Cram is Professor of European Politics at the University of Edinburgh; Senior Fellow, The UK in a Changing Europe; and Academic Editor of European Futures. Her research areas include European public policy, European identity and the neuropolitics of public policy and identity.
.