The UK Government’s approach to the current refugee crisis in Europe is a continuation of policies intended to discourage migration to Britain, writes Gareth Mulvey. He argues that this strategy will do little to address the situation, may cause tension between London and the devolved administrations and could hamper relations with the rest of the EU in this period of renegotiation of membership. 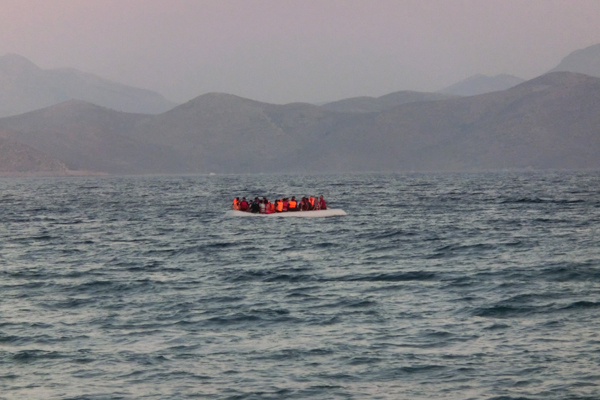 Migrants and Refugees off the Coast of Kos, IFRCRCS, CC-BY-NC-ND-2.0

What is most striking about the UK Government’s ‘response’ to the ‘crisis’ in the Mediterranean (the term crisis is used here due to its prevalence, though not accepted uncritically) is the fact that, for it, that was not where the crisis was. The crisis for Britain was in Calais. Despite having argued for the end of the Mare Nostrum search-and-rescue operation run and paid for by the Italian Government, the relatively small number of people trying to get into the UK from Calais was the real focus of attention.

It was these people who were referred to as swarms, and government action concentrated on fortifying borders, primarily through building fences around and deploying dogs within the Eurotunnel compound. However, there are clearly links between the two crises from the government’s perspective and these should be located historically.

What has underpinned UK Government thinking on unwanted migration (mostly refugees but also low skilled migrants from outside of the EU) for much of the last two decades has been a view that Britain is a magnet for many of the world’s people, that huge numbers would come given the opportunity, and that the reasons for this concern pull rather than push factors.

This has led to very narrow governmental thinking, aimed at reducing the pull by making life in Britain more difficult as well as externalising border controls to actively prevent people from getting to the UK. Absent has been any conception of why people leave their countries of origin, always crucial but of obvious importance in the current crisis. Existing literature provides practically no evidence for pull factors in the case of refugee movements, yet policy continues to be predicated on this.

The UK Government’s response to Mare Nostrum in 2014 was consistent with this approach, focusing entirely on the alleged pull. The argument was that saving lives in the Mediterranean acted as a pull factor and that people were encouraged to get on boats because of the prospect of being rescued. The implicit solution was letting people drown as a disincentive to movement.

Foreign Office Minister Baroness Anelay put it bluntly: ‘we do not support planned search and rescue operations in the Mediterranean’ due to the ‘unintended “pull factor”, encouraging more migrants to attempt the dangerous sea crossing and thereby leading to more tragic and unnecessary deaths’. This proved factually wrong, with more people fleeing after the end of Mare Nostrum than in the year before. It was also subject to pointed criticism on moral grounds, that death as a behavioural disincentive could not be justified.

As more refugees fled Syria and elsewhere and arrived on the shores of EU Member States, the UK Government took a firm approach that it would not assist in any EU-wide resettlement. As other EU states struggled to cope with the numbers of refugees crossing their borders, the UK, being an island on the periphery of Europe was able, at least rhetorically, to keep the ‘problem’ at arm’s length.

This was justified by emphasising that the UK aid budget supports refugees in camps in countries bordering Syria. Providing support in the region of origin but refusing access to the UK is a practice that can be traced back to the war in Kosovo, when the UK Government argued that taking refugees ‘would only have assisted Milosevic’s objectives’. It is worth adding that the ‘share’ of refugees supported by the so-called developed world has declined markedly in recent years, from 30 per cent in 2004 to just 14 per cent in 2014 (UNHCR).

It seems likely that the UK Government assumed that existing hostility to migrants in public debates would result in support for the approach of taking no refugees from Syria. In fact, the public response compelled it to change its approach, from one emphasising aid but no refugees to one accepting the need to take part in refugee resettlement, however inadequate.

The UK now aims to accommodate 20,000 Syrian refugees over the next five years, taking them from refugee camps close to Syria (by contrast Germany has now allowed almost one million asylum seekers to enter in 2015 alone, while Sweden has supported 100,000 in 2015). However, Britain will not contribute to helping to resettle those already in Europe, thus contributing nothing to solving the present ‘crisis’.

There is also a major contradiction in the government’s approach. It claims that its focus is on addressing the conditions that force people to flee through the aid budget (at last an acknowledgement of push factors). It also says that this is best done by targeted aid in the region of origin. However, at the same time, in order to maintain a tough stance, particularly regarding public money, it is drawing from the same aid budget to pay for those Syrians resettled in the UK.

This means that the level of support in the region of origin will consequently fall, presumably pushing more people to flee to Europe where the UK will continue to refuse to help them. Indeed, it seems implausible that the recent decision to join in the bombing of Syria can do anything in the short term other than create more flight, at which point it seems that Britain will continue to abstain from helping resettle movement that it has helped to create. This position has been challenged within Westminster and by devolved authorities.

The relationship between the Scottish Government and the UK Government on migration-related issues is a complex one (see Tomas Hammar’s notion of immigration policy versus immigrant policy). It is certainly true that the rhetoric in Holyrood is different from that in Westminster. However, the Scottish Government in the present crisis has no control over who is able to get into the UK as either a resettled refugee or as an asylum seeker. However, it can ‘do’ immigrant policy differently in, for example, providing more equal access to education.

Alongside Scottish local authorities, it has also suggested that a significant proportion of the 20,000 Syrians to arrive in the UK are resettled in Scotland (two groups have now arrived), while also highlighting the inadequacy of that number. It is not enough to suggest, as some have done, that the Scottish Government is able to be more liberal due simply to its lack of responsibility in terms of borders and access.

There are broader differences between Westminster and Holyrood that speak to the present crisis. As an example, the Scottish Government’s white paper on independence was explicit about both seeking increased migration and removing a future Scottish Government from decision-making on asylum issues through the creation of an independent refugee determination agency. This approach, alongside far more positive rhetoric around the current refugee crisis, suggests differing politics rather than simply issues of who has control and power.

In the meantime, an EU-wide crisis appears to be running straight into domestic UK politics in the form of the referendum on EU membership by end of 2017. Indeed, one of the questions that may arise in upcoming discussions between the UK Government and other EU states around the referendum will concern migration. It seems in the public debate that the only issue to be discussed in any renegotiation is migration.

Nevertheless, while extolling the virtues of European solidarity (with France) as a rationale to vote to bomb Syria, the lack of any solidarity regarding refugees is part of the context in which the discussions will take place. How this plays out in the run up to the referendum will be a major test of the EU’s and Britain’s approach to the migration crisis. How both the discussions around Britain’s renegotiation and the result of the referendum impact on the relationships between Westminster and Holyrood will ensure a great deal of political intrigue in the years ahead.

Dr Gareth Mulvey is Lord Kelvin Adam Smith Fellow in Social Sciences at the University of Glasgow. He has experience as a university and voluntary sector researcher, and his research interests include migration, migration policy and the impact of policy on diverse migrant communities.