In the process of Brexit, local government in Scotland will have specific concerns over funding, legislation and the division of powers, writes Serafin Pazos-Vidal. He argues that, based on the plans from both the Scottish and UK governments, it seems unlikely that Scottish councils will be given meaningful opportunities to contribute to Brexit decision making. 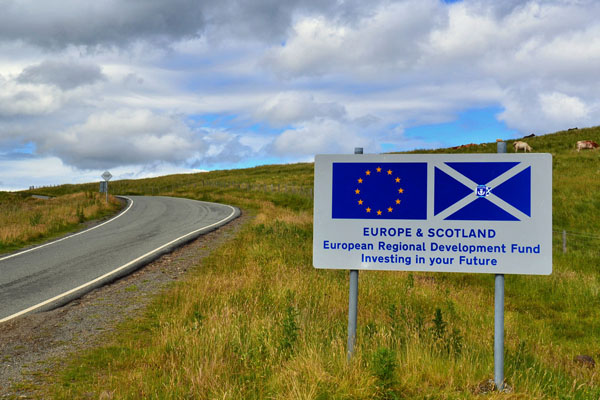 On 17 January, the UK Prime Minister outlined in a speech her twelve priorities ahead of launching the process of withdrawal from the EU in March. Her statement, building on the one she gave at her party conference, was in response to demands for clarity, including through a parliamentary motion voted last December. It also followed the Scottish Government’s proposals for Scotland to remain in the EU Single Market, and ahead of a Joint Ministerial Committee bringing together the UK and devolved governments.

The Prime Minister confirmed that the UK will leave the EU entirely by March 2019. It will not be part of the EU Single Market. It will not retain jurisdiction of the European Court of Justice (ECJ), neither will it participate in the Customs Union. This will enable the UK to negotiate trade deals with the rest of the world and to impose migration restrictions on EU and non-EU nationals alike, prioritising the entry of highly-skilled workers.

The UK will seek to negotiate, over the two-year period, not only the withdrawal (including debts and obligations) but also bespoke arrangements so that the UK has as minimal barriers as possible for goods (such as for vehicles and other supply chains) and services (particularly finance) to the EU, and vice versa. The government also wants to conclude an early agreement concerning EU and UK nationals, to ensure that they have reciprocal rights. Special arrangements for home affairs and antiterrorism cooperation are intended to found as well.

The UK Parliament will vote on the final agreement before the end of the two-year period. While the UK Supreme Court ruling on 24 January confirmed parliament’s position in triggering EU withdrawal, it is politically unlikely to modify the main thrust of the government’s position.

Like the majority of political and civic Scotland, local government largely supported ‘Remain’ in the referendum. By chance, the leadership of most councils were meeting at their summer convention just as David Cameron resigned and Nicola Sturgeon put the prospect of a second independence referendum back on the table.

In a way, Scottish local government approached the EU referendum with a greater awareness than its UK counterparts, given its experience with major constitutional and structural reform. Examples include the SNP rise to power in 2007, the introduction of Single Outcome Agreements, the end of budget ring-fencing and the extension of Community Planning. In recent years, councils have also dealt with police ‘reform’ and health and social care integration, amounting to at best mixed central-local arrangements, at worst centralisation. Schools may well be the next focus of such structural change.

Concerns about a trend towards centralisation have not been allayed by the Calman Commission, which prepared a supplementary wave of devolution via the Scotland Act 2012; the Smith Commission following the independence referendum; or indeed local government’s own Commission on Strengthening Local Democracy.

Inevitably, the aftermath of the EU referendum has been seen through this prism. In subsequent statements and submissions, individual authorities and their national organisations have expressed deep concern on the impact that Brexit – as the most important constitutional change since devolution – might have on councils as democratically elected institutions. At the same time, community cohesion (ie the rights of EU nationals living in the UK), the impact of demographic decline due to potential immigration restrictions and ensuring the survival of certain industries (eg agriculture and food processing) are also key concerns.

Councils have also expressed uncertainty about the multi-annual €1.2bn of EU funds already agreed through 2022 that are managed by the Scottish Government – a third of which are delivered by local authorities. Some of these concerns have subsequently been addressed by promises from the UK Treasury and the Scottish Government that the existing funds will continue, no matter what happens, until the end of the current period. A number of parliamentary evidence sessions and ministerial meetings at Scottish and UK level have been held to convey those concerns.

Local Government’s Role in the Negotiations

In view of the above, the Scottish Government’s proposals last December to retain membership of the Single Market were close to the core priorities expressed by councils. Theresa May’s Lancaster House speech seems to run contrary to the main tenements of the Scottish Government’s strategy. It remains to be seen whether some form of agreement between both administrations is still possible.

Presuming that the Prime Minister keeps her current approach in the EU negotiations and clearly succeeds (which is not forseeable), this will have a number of consequences for local government. On constitutional issues, neither the Scottish Government’s demand for direct repatriation of EU powers to Holyrood nor the piecemeal approach suggested by Theresa May would be feasible.

Local government in Scotland could call for a constitutional convention, in which it will have say in how existing and new powers should be exercised. In view of the work and outcomes of the Calman and Smith Commissions, this seems unlikely. Contrary to other parts of Europe – like Austria, Germany, Italy, the Netherlands or the Nordic countries – the UK lacks any comprehensive system for consensus-building across levels of government.

This absence also does not bode well for the proposed UK-EU Free Trade Agreement. For instance, the objections from Scottish councils over the Canada-EU trade deal (CETA) or the proposed EU-US deal (TTIP) were substantial. The serious concern about trade deals hampering local public services is likely to be reproduced in the forthcoming negotiations.

The Coalition government had issued an EU Policy Statement on the Localism Act 2011, design to establish local government consultation on EU issues, but this was never fully implemented. It is unlikely to be used now for Brexit, so councils’ input will predictably come down to ad hoc and informal exchanges with the UK government.

Indeed, the Supreme Court’s Miller judgement confirms that the UK is politically a Union, but legally a unitary state. The Court’s unqualified (and unanimous) statement of that fact will provide ample political cover for present and future UK governments to exercise the broadest interpretation of reserved powers when dealing with international agreements, even where touching upon devolved or local powers.

The second area of concern is how far the proposed Great Repeal Bill will go. Local government is well-placed, as most of the EU acquis that applies to it comes from EU directives, and therefore is already part of the domestic statute book. It will be technically easy to approve umbrella legislation that does for EU law what the Statute of Westminster did for the Commonwealth Realms to ensure the continuity of law after their independence.

However, it is unclear what will happen to every piece of legislation or quasi-legislation that is neither a directive nor a regulation (eg state aid guidelines). For council administrations, the concerns are mainly around areas such as outstanding EU audit and reporting obligations. Equally, it is unclear if UK courts will refer to ECJ case law when dealing with former EU legislation, or ignore it completely.

In terms of existing EU-defined standards, local government is will ask for as much of the status quo as possible so that, for instance, existing rights and obligations for employees remain. However, on issues like the current prohibition of ‘buy local’ procurement policies or certain aspects of state aid rules, it is probable that councils will ask for greater flexibility than under EU rules. They will also be happy to see the end of EU reporting obligations, which often doubled up on domestic ones.

The same logic is will prevail in terms of community cohesion. EU nationals already living in the UK should not see their rights undermined. While the UK may prioritise future entry of highly-skilled migrants, councils may call for allowances to be made for seasonal workers and specific sectors, particularly in remote and rural areas of Scotland.

On economic policy, the UK government is promoting its new Industrial Strategy. However, the safety net and certainty provided by EU funds that ran over several parliamentary terms will certainly be missed, and councils are likely to demand that they are replaced in some form by UK or Scottish local economic development funds.

A question also remains over what this new ‘Global Britain’ means for local government. Non-EU European states, such as Iceland and Norway, enable (indeed pay for) their local authorities to participate in cross-border and transnational projects on economic development, sustainability and good governance.

Theresa May has already hinted that researchers will be able to do so in future, but not councils. Equally, while UK government sees the UK as a free trading nation, an array of international agreements such as through the OECD, United Nations Sustainable Development Goals and the UN HABITAT III Conference on Housing and Sustainable Urban Development directly concern local government.

Unfortunately, neither the UK nor Scottish Government has developed any form of engagement with councils on how to transpose and measure progress against these global goals locally, in contrast with countries such as Norway. If anything, local government has pursued its own international engagement directly with the United Nations.

With the Conservative Party hinting that, after Brexit, it might also withdraw from the Council of Europe – where local councillors and MSPs officially represent Scotland in the Congress of Local and Regional Authorities – there is little hope that the UK will fully implement the European Charter of Local Self-Government. Global Britain? Maybe, but less so for local government.

The author writes here in a purely personal capacity.

Serafin Pazos-Vidal is PhD Candidate in EU Multi-Level Governance at the Universidad Nacional de Educación a Distancia (UNED). He is also the Head of Brussels Office of the Convention of Scottish Local Authorities (COSLA).