Bosnia’s formal application for EU membership, received today, is predicated on a new and untested framework for the country’s political entities to cooperate with each other, writes Andy Aitchison. Drawing on the EU’s attempts to reform the police several years ago, he argues that, if leaders continue striking political agreements that meet just the minimum required by international actors, the country will not resolve the serious challenges it faces. 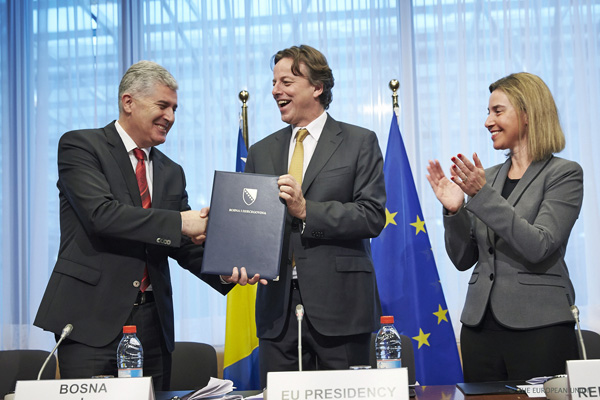 The announcement that Bosnia and Herzegovina (BiH) would submit an application for candidate status to the EU today, 15 February, has been greeted with a degree of surprise. The agreement of a coordination mechanism within BiH, a precondition for candidacy, had not previously been publicly disclosed.

The creation of a framework for coordination on paper, the last-minute claims of achieving an apparent minimum for the next step on the European path and a backlash from key domestic political actors recall the fate of an earlier, EU-driven, attempt to reform the country’s police. These previous events present a cautionary tale for optimists, a rare breed in contemporary BiH.

In the summer of 2005, there were signs of optimism about BiH’s European future, and yet clouds could be seen gathering on the horizon. At that time, inter-party negotiations were taking place over police reforms, including proposed policing territories defined by technical criteria and disregarding existing internal political boundaries within BiH.

A participant from the Office of the High Representative (OHR) described his amazement at hearing Bosnian delegates saying ‘this is something the European Union wants… let’s get on with it’. This was seen as a big step. When the OHR was shifting to less forceful intervention, it was presented as evidence of what could be achieved when Brussels was leading the agenda.

But ahead of negotiations, the main parties of government in Republika Srpska (RS), the Serb Democratic Party and the Party of Democratic Progress, had been clear that they would not accept any police boundaries which did not align with those of their entity. During the negotiations, they showed signs of pulling out, and likewise their main opposition in RS, the Alliance of Independent Social Democrats, also signalled coolness towards the negotiations.

In multi-party negotiations, and at a point when power in RS was shifting, these parties all represented potential veto players. RS parties anticipated continued electoral support from positioning themselves as protectors of the power and status of the Serb entity.

A clear rejection of cross-entity policing areas in the RS People’s Assembly followed, but agreement on policing was a precondition for opening negotiations on a Stabilisation and Association Agreement (SAA), a key milestone on the path to EU candidacy. After missing initial deadlines, Bosnia’s various parliaments came to a limited agreement on policing, but parked the issue of territorial boundaries with an implementation directorate. The minimum requirements of the SAA had been met, but the most difficult political issues had been set aside, to be resolved (or not) later.

More than ten years on, police boundaries are not defined by technical criteria, and continue to be tied to the political structures of entity, canton and district.

Following on from the announcement of the candidacy application and the coordination mechanism, the RS President, Prime Minister and Government have all issued statements which question the authority of the decision on the mechanism. This alone would suggest that the EU should exercise extreme caution before entering a process where a weak agreement on paper proves inadequate to the task of coordination.

Beyond this, major unresolved issues continue to suggest a lack of capacity, will or some combination of the two, to prioritise EU conditions over the concerns of domestic politicians. The incompatibility of the BiH constitution with the European Convention on Human Rights, was first noted by the Venice Commission in 2005, and was reinforced by the Sejdić-Finci and Zornić judgements of 2009 and 2014 respectively.

The ongoing exclusion of ethnic ‘others’ from key political offices in BiH continues. Likewise, a census conducted in 2013, the subject of extended political negotiations from at least 2008, has yet to be published.

The police reform negotiations of 2005 seem long forgotten now, but provide a useful precedent. In a system as fragmented and complex as BiH, apparent achievement of the minimum thresholds for progress is meaningless in absence of serious engagement with key veto players and their driving motivations.

Dr Andy Aydın-Aitchison is Senior Lecturer in Criminology and Co-Director of the MSc in Global Crime, Justice and Security at the University of Edinburgh. His research focuses on global crime and responses to it and he has worked extensively in the context of Bosnia and Herzegovina.