The EU referendum result has fundamentally reshaped the Scottish independence debate, and the new draft referendum bill is a both political and practical step by the Scottish Government, writes Peter Lynch. He observes that, in this unpredictable constitutional environment, Brexit has created opportunities for the SNP to engage with those who haven’t previously contemplated Scottish independence. 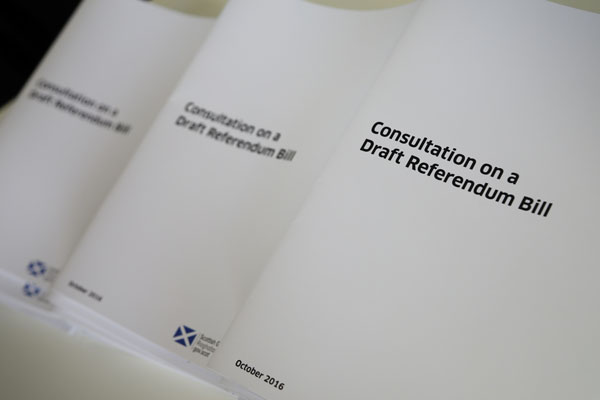 There’s a bit of back to the future with the publication of the Scottish Government’s draft referendum bill. We’ve been here before – back in 2010 – though in different circumstances, with different constitutional options on show.

Back then, in February 2010 Alex Salmond’s minority government produced the Draft Referendum (Scotland) Bill Consultation Paper – 80-odd pages of key questions for consultation plus the draft bill itself. What stood out about this process was its challenge to the other political parties on devolution, plus the convoluted two-ballot format that sought to pitch ‘full devolution’ against the Calman Commission powers, followed by a second ballot paper on independence. The draft was the outcome of the National Conversation held by the SNP government from 2007-2009 and its content came to naught at the time.

Constitutional politics has moved on since then. For the SNP ‘independence means independence’ and we have had two different pieces of independence referendum legislation enacted since 2010, in the shape of the referendum act itself as well as the law to extend the franchise to 16 and 17 year olds.

The new consultation and draft bill pretty much mirror these laws from 2013. What makes the consultation different is that legitimacy is to the fore, with prominent mentions of the distinctive Brexit result in Scotland and the SNP’s manifesto pledge on indyref2 if a significant and material change of circumstances occurred. The consultation proposes that the referendum question of 2014 will be used again, but includes some wiggle room to alter the question slightly, too. We won’t know whether that is significant until the question is published.

How to interpret all of this? Well, to begin with, it’s obvious the SNP wants another independence referendum. This is hardly news. The question is when and under what circumstances – will it be in the short or longer term for example? These are our known unknowns.

Before 23 June, the SNP did not have the answer to these questions and it had scheduled a summer campaign consultation on the issue to help shed some light on public attitudes. The EU referendum delayed this initiative – and changed its content – but it is being rolled out now in the shape of the National Survey.

The SNP’s vast membership has been put to use, asking people to complete the survey – also vigorously promoted online – with the hope that it will provide a range of answers to the independence question and its connection to Brexit, immigration, identity, the economy, etc. It will supplement opinion polling on attitudes to independence in the current period and offer some guide to the timing of the next independence referendum.

More obviously in the public eye is the Scottish Government’s intense engagement with the EU issue since the Brexit referendum. This engagement is multi-dimensional – it is happening with domestic interest groups, businesses, UK government, devolved institutions, EU structures and states.

Options and proposals have been thrown onto the air – and it’s not just Scotland that will be negatively affected by Brexit either: hence discussions with Gibraltar, Wales and Northern Ireland. The all-consuming nature of Brexit and its many challenges make it an unpredictable issue, not least as the UK Government follows a different path to the Scottish Government. However, this situation creates political opportunities for dialogue with actors and institutions not usually sympathetic to Scottish independence. Some of the UK Government’s actions and statements might also help the SNP’s case, too.

Despite the huge developments of the last few months, opinion polling has seen very little shift in opinion on the independence issue. So, there’s some way to go before the Scottish Government could trigger a referendum with the confidence that it would actually win: which might not occur in a convincing way or might not happen whilst the UK is still in the EU.

However, being prepared is helpful. And that means having draft legislation in place. It’s a form of insurance policy in the Brexit context to back up Scottish Government claims in negotiations with the UK, as well as a practical measure to hold the referendum when the time comes. At the same time, the National Survey initiative shows a level of mobilisation on the independence question that illustrates a degree of preparedness as well.