Despite the fact that it has not yet begun withdrawal negotiations or indeed left the EU, the UK is already experiencing a dramatic loss of power and influence within the EU, writes Tobias Lock. He argues that the role of EU law within the UK is also in question even now, since the eventual prospect of the UK’s exit could undermine its effective application. 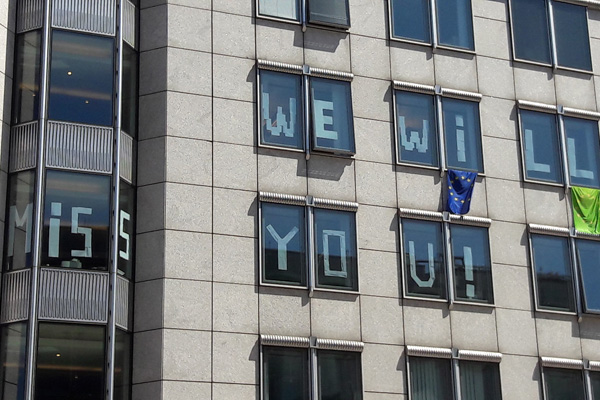 Post-Brexit Blues from the Greens/EFA in the European Parliament, Rebecca Harms, CC-BY-SA-2.0

In theory, the situation is pretty straightforward when it comes to the UK’s position in the EU, after the vote to leave on 23 June. The UK remains a Member State and therefore enjoys all the privileges of EU membership and it must fulfil all the obligations that come with it, until it formally leaves the EU.

Importantly, under Article 4(2) of the Treaty on European Union, the Union must treat all Member States equally. After all, Article 50 TEU makes clear that the EU treaties only cease to apply with the entry into force of the withdrawal agreement or after two years from notification, if no agreement is reached.

The only case in which the departing Member State may be treated differently is discussions and decisions of the European Council and the Council of the EU concerning the withdrawal process itself. The way things have unfolded over the last couple of days, however, seems to indicate a different reality.

It is useful, perhaps, to distinguish between the period after the referendum result but before formal notification under Article 50 is given and the period from the notification to a UK withdrawal taking effect.

Even though that notification has not yet been given, the European Council met on 29 June without UK participation. Of course, the European Council’s lawyers were careful to underline that this was an ‘informal’ meeting of the remaining 27 leaders. This was evidenced by the fact that the meeting statement did not feature its letterhead.

Nevertheless, its details can be found on the European Council’s website and the meeting took place using the EU’s infrastructure. This is one of the first pieces of evidence that the UK is now a lame-duck Member State – still formally part of the club, but with one foot out the door.

A further sign of this came from European Commission President Jean-Claude Juncker when, speaking in the European Parliament after the referendum, he asked Nigel Farage: ‘Why are you here?’ Emotions were of course running high and Nigel Farage was responsible for running a ghastly campaign of lies and fearmongering. Nevertheless, he represents people living in the UK in the European Parliament (which incidentally has a veto on a withdrawal agreement) and therefore has a right (and arguably an obligation) to be present during the debate.

More evidence of the UK’s second-tier membership status came with the resignation of the UK’s European Commissioner, Lord Hill, who was in charge of financial services. He will presumably be replaced by someone who will be given a less important portfolio than previous UK commissioners.

It has also been reported that UK MEPs stand to lose senior roles in the Parliament, in particular chairs of committees. It has been suggested that this will take place in January 2017, thus presumably after the UK has formally notified the EU of its intention to withdraw.

However, this raises the question of whether such treatment of the UK is compatible with the equality of Member States. The Aristotelian maxim that ‘equals should be treated equally and unequals, unequally’ comes to mind. In the case of the meeting of the 27 remaining Member States after the referendum, there are good reasons why they would want to exchange their views without the participation of the state with which they would soon have to negotiate an exit agreement.

By contrast, unequal treatment of MEPs is more problematic. After all, they represent the Union’s citizens (Article 14 TEU) and not the Member States. EU citizens represented by UK MEPs (both UK citizens and EU citizens living in the UK) are among those who are likely to be most affected by Brexit. Disadvantaging UK MEPs on the basis of who they represent – whether during this transitional period or not – is anathema to the equality of EU citizens.

It will also be challenging to manage the period after the notification to withdraw.  UK MEPs and representatives in the Council still have the right to vote on legislation. There will continue to be a UK European Commissioner and judges in the Court of Justice and General Court. However, it is likely that the UK’s influence behind the scenes will be diminished.

The UK’s bargaining power in the Council will be reduced and there will be fewer incentives for it to get involved, in particular where legislative measures are likely to enter into force after its departure from the EU. It will be particularly interesting to see whether the UK will take up its presidency of the Council of the EU in the second half of 2017 as planned.

While the political role of the Council presidency has become less important since the creation of a European Council president with the Treaty of Lisbon, the Member State holding the presidency still has a good deal of influence over the Council’s work programme – and thus on the future of the EU’s development – during its stint.

The UK needs to ask itself how – as a Member State that has indicated its intention to leave the EU – it can credibly set out a plan for the future development of the Union.

But there are wider questions beyond these institutional issues. Within the UK, legal certainty in all matters of EU law might suffer as a consequence of the Leave vote. While, in theory, nothing will change until the day the UK has formally ceased to be a Member State, several considerations suggest that EU law as applied within the UK may have already lost some of its bite in practice.

In particular, one may wonder what will happen from now onwards if EU law is not properly applied. Would UK courts show the same commitment to interpreting EU law as faithfully as they did before? Moreover, how receptive will a UK court be to suggestions by parties to a dispute to request a preliminary ruling from the Court of Justice?

Given the time involved in drafting the questions, plus waiting for an answer from Luxembourg, the UK might be out of the club by the time the case is handed back to the national court. Of course, in most scenarios the answers provided by the CJEU may still be relevant, but would they still be binding?

At least from the time that Article 50 has been triggered, one can therefore expect far fewer preliminary ruling procedures instigated by UK courts, which have not been the most reference-happy courts in the past in any case.

In addition, how strictly will the European Commission fulfil its role as guardian of the treaties vis-à-vis a departing Member State? Infringement proceedings take a long time and why should the Commission invest time and energy in proceedings that, in all likelihood, will not be completed before departure?

This of course opens up opportunities for public bodies in the UK to deviate from their obligations under EU law, already safe in the knowledge that there may be no sanctions.

Similar concerns apply to private law relationships. Legal uncertainty over the future of the UK’s participation in the Single Market might make employers less willing to employ EU citizens and investors less likely to make commitments in the UK. In addition, if the judiciary becomes laxer in its review of EU law requirements, employers might be incentivised to flaunt them.

These early indications on the current relationship between the UK and the EU show that, despite the fact that nothing has technically happened in legal terms, the UK’s journey out of the European Union has already commenced and is beginning to have tangible legal consequences.