Scotland is faced with several options for retaining its relationship with the EU following the UK’s vote to leave, writes Tobias Lock. He suggests that each option would present its own difficulties, and that timing, Scotland’s access to the UK’s withdrawal negotiations and the position of the remaining EU members will play major roles. 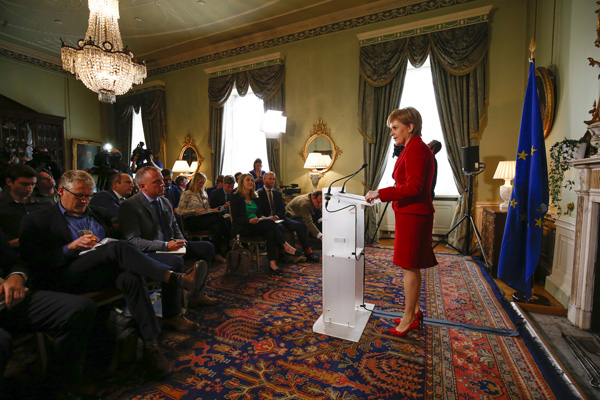 The fact that Scotland voted by 62 per cent for the UK to remain a member of the EU, whereas the majority of the overall UK electorate opted to leave the EU, raises important political and legal questions. Scotland’s First Minister Nicola Sturgeon announced on Friday that she intended ‘to take all possible steps and explore all options to […] to secure our continuing place in the EU and in the Single Market in particular’.

She added that ‘it is therefore a statement of the obvious that the option of a second referendum must be on the table. And it is on the table.’ A first attempt at Scottish independence was rejected by a majority of 55 per cent of votes cast less than two years ago.

It is therefore worth discussing a number of options for Scotland’s European future depending on whether it remains part of the UK or whether it becomes an independent country wishing to join the EU. This article should be understood more as a sketch than as an attempt at an authoritative answer.

A European Future as Part of the UK?

If Scotland remains in the UK, the ‘reverse Greenland’ option could provide a solution. Greenland became part of the European Communities with Danish accession, but left in 1985 after a referendum whilst remaining part of Denmark. In technical legal terms, this was affected by way of Treaty change.

The Greenland Treaty introduced a clause into the EEC and Euratom Treaties stating that ‘this Treaty shall not apply to Greenland’ and added Greenland as one of the overseas territories of the Member States, in what is now Annex II to the Treaties. The suggestion is that the same in reverse could be done for Scotland (and perhaps Northern Ireland) – that is, the United Kingdom could formally remain a member of the EU, but the treaties would be amended to not apply to England and Wales.

While this is a theoretical possibility, it brings with it difficult legal and political challenges. For one, it would formally mean that the UK would not be leaving the EU (in defiance of the will of the electorate). In legal terms, it might mean an internal customs border within the UK (in case England and Wales leave the customs union). Also, if England and Wales were outside the Single Market and did not accept free movement of people, that border would probably need to be policed by immigration officers.

It would also raise complex questions regarding Scottish devolution. For instance, what if EU law touched upon a reserved power – an issue that Westminster is competent to decide on? Would there have to be Westminster legislation implementing such an EU obligation for Scotland? Or would there need to be further devolution to Scotland? What if an Act of the UK Parliament violated EU law? Would it remain applicable in England and Wales, but have to be disapplied in Scotland? A reverse Greenland scenario might thus be tricky to get right in practice.

However, this solution is pushed to its limits where reserved powers are concerned. Of course, Westminster could recognise this and grant Scotland greater leeway in this regard. But where immigration policy or trade policy are concerned, it is difficult to see how a Scottish solution could in practice deviate from that applying to the rest of the UK.

An Independent Scotland as an EU Member State

The most straightforward option for Scotland’s future in the EU would be to become an independent country and an EU Member State. I don’t want to dwell on the many obstacles (legal and political) in the way of a second independence referendum, let alone the prospects of such a referendum being successful.

Instead, my focus is on the options available to achieve a seamless transition to EU membership. For instance, if a second bid for Scottish independence were successful, Scotland could seek to become independent the day the UK leaves the EU and become an EU member in its own right that same day. The question is how this could be achieved under EU law.

An independent Scotland would not automatically be a member of the EU, but membership would have to be negotiated. In particular, it would be difficult to draw an analogy with the EU’s handling of German reunification (a reverse-Germany) as no changes to the treaties were made at the time. This was possible because the German Democratic Republic acceded to the Federal Republic of Germany, which was already a Member State. A secession from a country that is a departing Member State is a different kettle of fish.

The sure-fire way for Scotland to become a Member State would obviously be to seek accession according to Article 49 TEU. But this route has a few disadvantages, which is why it might not have been the preferred option of the Scottish Government in the run-up to the 2014 referendum. Scotland might find itself at the back of the queue for membership. It is current Commission policy that no new members would be admitted during the current European Parliament (ie until 2019). Most importantly, Scotland would have to sign up to the whole EU acquis, including commitments to adopt the euro and join Schengen.

Hence it may be a worthwhile exercise to explore alternatives. This discussion is, of course, not new. We had it in 2014. There would be one key difference, however – the rest of the UK would simultaneously be in the process of leaving the EU.

One option therefore could be to use the UK’s withdrawal agreement to negotiate Scotland’s future EU membership. Article 50 TEU is rather vague as regards the contents of such an agreement when it speaks of the ‘arrangements for its withdrawal’. This would seem to be broad enough to accommodate a special arrangement for a newly independent part of the Member State to remain in the EU.

An argument against this solution might be that Article 50(3) TEU foresees that the treaties would cease to apply to the Member State concerned, which would include Scotland, unless of course it would no longer be part of the UK at that precise point in time.

Another option would be the Article 48 route, which had also been mooted by the Scottish Government in its white paper on independence. At the time, a key argument against this was that it would be pretty much as cumbersome as using Article 49, in particular that opening the treaty revision procedure could be hijacked by certain Member States to advance their particular interests.

The difference this time would be that in order to achieve a full ‘Brexit’, the treaties would need to be changed anyway – all references to the UK and its territories would need to be removed. It is thus conceivable that instead of deleting the words ‘United Kingdom’, these could simply be replaced with ‘Scotland’.

Compared with Article 49, the disadvantage of both these routes is of course that Scotland would not be formally involved in the negotiation process. Moreover, the Article 48 route might be tricky in terms of timing – could the remaining 27 Member States really agree treaty change among them while the UK is still in the EU? Or would they have to wait until the withdrawal agreement has taken effect, which would make a seamless transition difficult?

Should a second independence referendum become a reality, the advantages and disadvantages of these and possibly more options will need to be discussed in more detail. It is interesting to note that the noises from Brussels as regards Scottish membership of the EU are markedly more welcoming than two years ago. What a difference a Brexit makes.